Appearing on newsstands and specialty retail shelves nationwide today, Night Sky magazine is already striking a chord with novice stargazers — those who possess very little astronomy knowledge but still want to enjoy and explore the heavens. 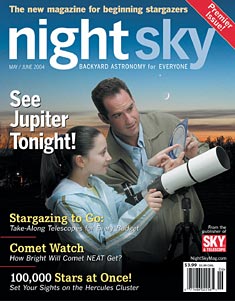 Upon receiving his premier issue of Night Sky, charter subscriber Deron Ash immediately e-mailed Kelly Beatty, the magazine's editor, with his thoughts. "The content of Night Sky hits the nail on the head," wrote Ash, "covering just what newbies are interested in with clear, insightful articles supported by straightforward graphics and charts."

Whether it's guidance for naked-eye star-hopping or advice on how to put new telescopes to good use, Night Sky is the perfect resource for budding "backyard astronomers." Each colorful issue of the new bimonthly provides readers with uncluttered, easy-to-use star charts and illustrations; a calendar of celestial events visible even from light-polluted cities; a how-to section for telescope owners; jargon-free science and hobby information; overviews of telescopes, accessories, books, software, and other astronomy products; and a gallery of stunning astrophotos taken by stargazers around the world.

Night Sky hails from Sky Publishing, whose award-winning monthly, Sky & Telescope, has been serving amateur astronomers since 1941. According to the company's president and publisher, Susan Lit, "Night Sky magazine reaches out to a different audience than Sky & Telescope — it will have broader appeal by virtue of the fact that its content will be accessible to anyone just getting started in the hobby."

"The response to Night Sky has been overwhelming," exclaims Marcy Dill, Sky Publishing's vice president of marketing and business development. "Bookstores were eager to carry the brand, and the response to our initial direct-mail effort has exceeded our expectations." In addition to traditional marketing and online campaigns, partnerships with Orion Telescopes & Binoculars, the Discovery Channel Stores, and Meade Instruments have all yielded positive results.

Night Sky is sold on newsstands for $3.99 per copy and by subscription for $17.99 for one year (six issues). For more information, see the magazine's Web site at NightSkyMag.com.

Sky Publishing Corp. was founded in 1941 by Charles A. Federer Jr. and Helen Spence Federer, the original editors of Sky & Telescope magazine. The company's headquarters are in Cambridge, Massachusetts, near the Harvard-Smithsonian Center for Astrophysics. In addition to Sky & Telescope, SkyandTelescope.com, Night Sky, and NightSkyMag.com, the company publishes two annual magazines, Beautiful Universe and SkyWatch, an annual wall calendar called Celestial Wonders, as well as books, star atlases, posters, prints, globes, and other fine astronomy products.