Night Sky Magazine to Be Launched Next Spring

Sky Publishing, known worldwide for its award-winning monthly, Sky & Telescope, proudly announces the launch of a new magazine, Night Sky. To be sold on newsstands ($3.99) and by subscription ($17.99), the new bimonthly offering will debut next April 13th with its May/June 2004 issue. 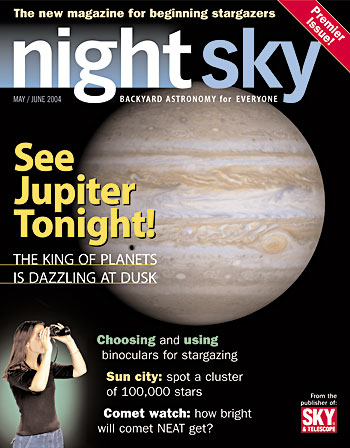 Night Sky, a new bimonthly magazine for beginning stargazers, will debut in April 2004 with its May/June issue. See NightSkyMag.com for details.

Night Sky is designed for entry-level stargazers who want to enjoy and explore the heavens, along with anyone who just bought a telescope (or received one as a gift) and is thinking, "Now what?" In addition to providing clear, well-illustrated guides for observing major events like eclipses and meteor showers, Night Sky will offer its readers easy-to-use star charts, a complete calendar of celestial happenings, a how-to section for telescope owners, basic science and hobby information, product overviews (telescopes and accessories, books, software), and a gallery of stunning photographs taken by amateur astronomers around the world.

"When you think about how many telescopes are sold each year and consider how many people were thrilled to see Mars at its closest this past August, you get a clear sense that millions of people are interested in learning more about the universe," says Marcy Dill, Sky Publishing's vice president of marketing and business development. "We spent nearly a year conducting research among first-time telescope buyers and found there is a dearth of resources to help them. That’s where Night Sky comes in," Ms. Dill explains.

"Everybody gets excited when they get a chance to peek at bright planets or the Orion Nebula through a telescope, but few people want to master the technical aspects of astronomy," observes Mr. Beatty. "Night Sky will make stargazing simple and fun, so that beginners can find their way among the stars and confidently share their interest with family and friends."

Whether someone is upgrading to a more powerful telescope or starting the hobby with binoculars, Night Sky will provide the information consumers need to make smart purchasing decisions. "Our research has demonstrated that entry-level practitioners have the interest, time, and money to invest in the hobby — and they often spend thousands of dollars on their first telescope, which is great for manufacturers and dealers," says Susan Lit, president of Sky Publishing and publisher of Sky & Telescope magazine.

More information about Night Sky is available at NightSkyMag.com.

Sky Publishing Corp. was founded in 1941 by Charles A. Federer Jr. and Helen Spence Federer, the original editors of Sky & Telescope magazine. The company’s headquarters are in Cambridge, Massachusetts, near the Harvard-Smithsonian Center for Astrophysics. In addition to Sky & Telescope and SkyandTelescope.com, the company publishes two annual magazines, Beautiful Universe and SkyWatch, and an annual wall calendar called Celestial Wonders, as well as books, star atlases, posters, prints, globes, and other fine astronomy products.