Partial — and Annular — Eclipse of the Sun
to Sweep North America Sunday, May 20th

Note to Editors/Producers: Click on the images below for publication-quality versions.

People with clear skies across most of the U.S., Canada, and Mexico will experience a partial eclipse of the Sun late this Sunday afternoon (May 20, 2012). Only those near the Eastern Seaboard will miss out.

And, if you happen to be in a swath of land running from Northern California to Texas, you'll also get a very special kind of partial eclipse: an annular eclipse, in which the rim of the Sun becomes a brilliant ring completely encircling the black silhouette of the Moon.

As the solar eclipse on May 20th progresses, its partial and annular phases will look very similar to this eclipse on May 10, 1994. Photo by Fred Espenak / SkyandTelescope.com. Click image for high-resolution version. Permission is granted for one-time, nonexclusive use in print and broadcast media, as long as the credit above is given. Web publication must include a link to SkyandTelescope.com.

The Sun will be moving down the afternoon sky when a dark dent begins to intrude into one edge. The dent will deepen, eventually turning the Sun into a fat crescent — or, for western half of the continent, a thin crescent. The dent is the silhouette of the new Moon traveling along its monthly orbit around the Earth.

Most Westerners can see the entire eclipse from beginning to end before sunset. Farther east, sunset puts an end to the show while the eclipse is still in progress — affording weird and spectacular sunset scenes just above the west-northwest horizon. “This is going to be a great photo opportunity,” suggests Robert Naeye, editor in chief of Sky & Telescope magazine. For a how-to, see Sky & Telescope’s article Photograph the Solar Eclipse. 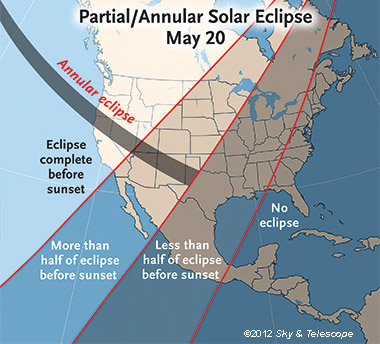 Nearly all North America gets at least a partial eclipse on May 20th, with the Moon taking a big bite out of the Sun. The eclipse will still be in progress at sunset for much of the U.S., Canada, and Mexico. Click here for a high-resolution version without labels and here for a version with labels. Permission is granted for one-time, nonexclusive use in print and broadcast media, as long as credit is given to Sky & Telescope. Web publication must include a link to SkyandTelescope.com.

The eclipse will become annular (a “ring eclipse”) for parts of southern Oregon, northern California, Nevada, Utah, Arizona, New Mexico, and a bit of Texas, as also shown on the map. The annular aspect makes this the first “central” solar eclipse (meaning total or annular) to cross the United States since 1994. Untold numbers of people are planning to travel to the path of annularity for the grand event.

Americans are seeing the tail end of this eclipse. Its annular part begins at sunrise along the southern coast of China (where the local date is May 21st), then crosses parts of Japan, including Tokyo on the centerline. It then speeds across the North Pacific through much of the day before making landfall on the California-Oregon coast in the late afternoon of the 20th (local date). 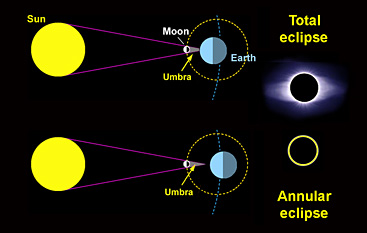 When the Moon passes directly between the Sun and Earth, its umbra (shadow cone) reaches Earth's surface and thus completely covers the Sun. The result is a total solar eclipse. But when the Moon is slightly farther from Earth, its disk appears to small to block the entire Sun, and an annular (or ring) eclipse results. Click image for high-resolution version. Permission is granted for one-time, nonexclusive use in print and broadcast media, as long as the credit above is given. Web publication must include a link to SkyandTelescope.com.

What to Watch For

Only 88% of the Sun’s surface area will be blocked during annularity. “This will result in less change in the quality of the daylight than you might think,” says Alan MacRobert, a Sky & Telescope senior editor. “Moderately thin clouds would dim the sunlight more. And if you’re where the eclipse is only partial, the dimming will be less.”

The exposed part of the Sun will remain blindingly bright — literally so — so anyone viewing any part of this eclipse, partial or annular, must use a safe solar filter, such as a #13 or #14 rectangular arc-welder’s glass or an astronomer's filter made specifically for Sun viewing. Ordinary dark glasses won’t do. Watching the Sun through an inadequate filter (or none) can permanently damage your eyesight.

“When the eclipse is deep or annular, the clear blue sky will become a darker, deeper blue than normal,” says MacRobert. “Look for Venus — it’s shining east of the Sun by about two fist-widths at arm’s length. Jupiter and Mercury will be tougher. They’re on the other side of the Sun by about a quarter and a third as far, respectively, and they’re not as bright.”

Other things to look for during this eclipse include a silvery or metallic quality to the light around the time of annularity or when the Sun is a thin crescent. Look for images of the crescent or ring Sun being cast under leafy trees; small openings between leaves often make “pinhole cameras” projecting images of the Sun on the ground.

But another solar spectacle is coming up much sooner. Just 16 days later, on the afternoon of June 5th, it’s the planet Venus’s turn to cross the face of the Sun. The silhouette of Venus will be a small black dot with just 3% the diameter of the Sun, compared to the Moon's 94% on May 20th. Read all about the transit of Venus on Sky & Telescope’s website.

Here are links to local eclipse timetables and predictions for any location.

More about the eclipse is at SkyandTelescope.com/may20eclipse.

To celebrate the eclipse, Sky & Telescope is offering its SkyWeek starwatching app FREE from May 14th through 20th. SkyWeek presents handy daily sights to look for in the starry night sky. Download for iPhone or Droid.

Sky Publishing (a New Track Media company) was founded in 1941 by Charles A. Federer Jr. and Helen Spence Federer. In addition to Sky & Telescope and SkyandTelescope.com, the company publishes two annuals (Beautiful Universe and SkyWatch), as well as books, star atlases, observing guides, globes of the Moon and planets, and other fine astronomy products.