The Perseid meteor shower, an annual celestial event beloved by millions of skywatchers around the world, returns to the night sky this week. And because the Moon is new, there will be no moonlight to hinder the view. 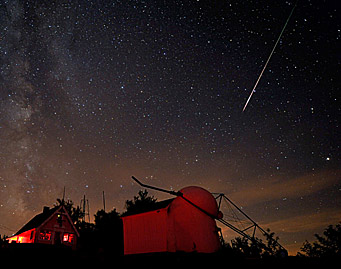 Sky & Telescope magazine predicts that the Perseid shower will be at or near its peak late on Wednesday night (the night of August 11-12) and, probably even better, late on Thursday night (August 12-13). "The moonless sky this year means the viewing will be ideal," notes Alan MacRobert, a senior editor at Sky & Telescope.

Although an occasional Perseid meteor may catch your attention in early evening, the prime viewing hours are from about 11 p.m. or midnight (local time) until the first light of dawn. This is when the shower's “radiant,” its perspective point of origin, is high up in your sky. The higher the radiant, the more meteors appear all over the sky.

To enjoy the Perseids, you need no equipment but your eyes. Find a dark spot with a wide-open view overhead. Bring a reclining lawn chair or a ground cloth so you can lie back and watch the sky in comfort. Bundle up in blankets or a sleeping bag, both for mosquito shielding and for warmth; clear nights can grow surprisingly chilly under the open stars (due to radiational cooling). “Relax, be patient, and let your eyes adapt to the dark,” says Sky & Telescope editor in chief Robert Naeye. “With a little luck you'll see a ‘shooting star’ every minute or so on average.” 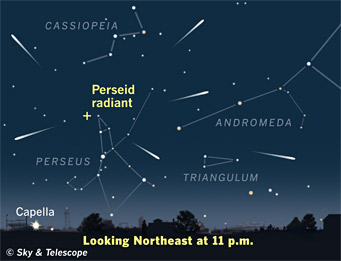 Here's a video animation (3.5 MB .mov file) of simulated meteors in this scene.

When you see a meteor, track its path backward. If you eventually come to the constellation Perseus — which climbs the northeastern sky as the night progresses, as seen at right — then a Perseid is what you’ve just witnessed.

Occasionally you may spot an interloper. The weaker Delta Aquarid and Kappa Cygnid showers are also active during Perseid season, and there are always a few random, “sporadic” meteors. All of these track back to other parts of the sky.

Any light pollution will cut down the numbers visible. So will the radiant's lower altitude if you’re viewing early in the night. But the brightest few meteors shine right through light pollution, and the few that happen when the radiant is low are especially long — skimming the upper atmosphere and flying far across the heavens.

The meteors are caused by tiny, sand- to pea-size bits of dusty debris streaking into the top of Earth's atmosphere about 80 miles up. Each Perseid particle zips in at 37 miles per second, creating a quick, white-hot streak of superheated air. The nuggets in Grape Nuts cereal are a close match to the estimated size, color, and texture of typical meteor-shower particles.

More about the Perseids and how to watch them appears in the August issue of Sky & Telescope magazine and at SkyandTelescope.com.

Audio Feature, 1m 32s (1.5M .MP3 file) in which Kelly Beatty [BEE-tee], Senior Contributing Editor for Sky & Telescope magazine, describes how, when, and where to view the Perseid meteor shower.