Note to Editors/Producers: This release is accompanied by several broadcast- and publication-quality graphics; see details below.

No planet holds the fascination of ring-girdled Saturn — especially the first time you view it with a backyard amateur telescope. Right now Saturn is as close and bright as it will get this year, shining like a yellow star in the eastern evening sky. Many telescope users consider it the most beautiful thing in the heavens, and a view of it in a good scope often draws gasps from first-timers.

This Friday, January 27th, Saturn is at opposition (opposite the Sun in the sky as seen from Earth) and at its closest to Earth for 2006. However, it will remain nearly as close, big, and bright all winter and well into spring.

In late January and early February, look for Saturn shining high in the east by 8 or 9 p.m. local time. It forms a not-quite-equilateral triangle with the similar-looking star Procyon, to its right, and the star-pair of Pollux and Castor high above it. Each side of the triangle is very roughly twice the width of your fist held at arm's length. (See the accompanying sky scene.)

However, as astronomers have felt ever since the invention of the telescope nearly 400 years ago, you can never see Saturn as well as you want! The ringed planet is indeed a jewel: exquisite but, from our distant earthly viewpoint, tiny.

Nevertheless, with time, patience, and a top-quality 4-inch or larger telescope, you can tease out more of Saturn's secrets on these winter nights than you might first suspect. Here's a quick guide.

Saturn's rings should be visible in even the smallest telescope at a magnification of 25 times. A good 3-inch scope at 50x magnification will show the rings as distinctly separate from the ball of the planet. The rings are currently tilted about 19° from our line of sight, less than in recent years. We see their south face, as well as the southern hemisphere of Saturn's globe, with a little of the globe's north polar region peeking from behind the rings' outer edge.

Saturn has more of a three-dimensional appearance than almost any other object in the sky, looking like a bright yellow-brown marble encircled by a ring system as flat as a paper cutout. Often adding to the 3-D effect is the planet's black shadow falling slightly sideways onto the rings where they pass behind it, though the shadow is visible only during times of year far from the January opposition date.

The rings' own thin shadow on the planet is subtler. From our earthly perspective, it shifts from the inside edge to the outside edge of the ring system about every six months. The shadow is on the rings' inside edge from now until August.

Details in the rings themselves shows up in amateur telescopes during moments when the ever-present turbulence in Earth's atmosphere steadies and the telescopic view sharpens up. The plainest ring feature is the thin, black Cassini Division separating the broad A and B rings. Its clarity is a fine test of atmospheric steadiness and the telescope's optical quality.

On the ball of the planet, you can often make out dark belts and brighter zones. They're vaguer than the similar belts and zones of Jupiter, but it's rare when a 6-inch scope shows Saturn looking completely blank.

A full guide to observing Saturn from your backyard, apartment balcony, or rooftop, and a chart identifying which of its moons is which, are in the February Sky & Telescope magazine, now on newsstands.

Sky & Telescope is pleased to make the following publication-quality graphics available to the news media. Permission is granted for one-time, nonexclusive use in print and broadcast media, as long as appropriate credits (as noted in the captions) are included. Web publication must include a link to SkyandTelescope.com. 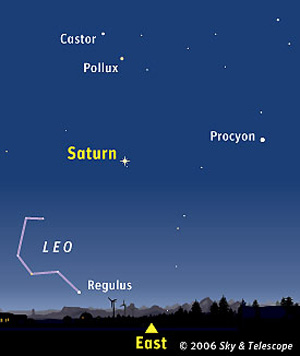 The ringed planet Saturn is easy to find on January and February evenings in 2006. Just face east (opposite where sunset occurred) and look for a roughly equilateral triangle formed by Procyon at right, the twins Castor and Pollux at upper left, and a brighter 'star' at lower left. That last one's not a star at all — it's Saturn! Click on the image to open a 720-by-540-pixel version formatted for television. Or you can download a high-resolution, publication-quality version (94-kilobyte JPEG) by anonymous FTP. This graphic is also available with a flat horizon, which might be more suitable for broadcast use (see below). 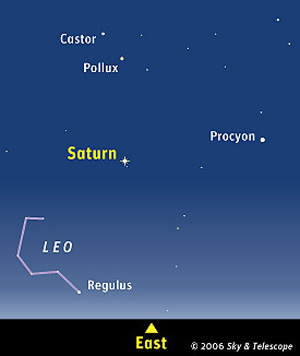 The ringed planet Saturn is easy to find on January and February evenings in 2006. Just face east (opposite where sunset occurred) and look for a roughly equilateral triangle formed by Procyon at right, the twins Castor and Pollux at upper left, and a brighter 'star' at lower left. That last one's not a star at all — it's Saturn! Click on the image to open a 720-by-540-pixel version formatted for television. Or you can download a high-resolution, publication-quality version (92-kilobyte JPEG) by anonymous FTP. This graphic is also available with a more realistic horizon, which might be more suitable for print use (see above). 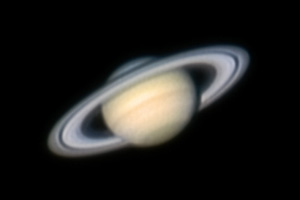 Saturn on November 9, 2005. To make this image, Sky &Telescope assistant editor Sean Walker used a ToUcam Pro 740 webcam on a 7-inch Maksutov-Newtonian telescope, then stacked hundreds of the sharpest video frames using RegiStax freeware. Click on the image to open a full-resolution version in a new window. 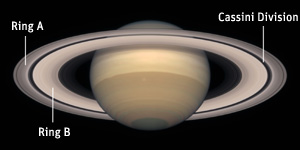 Acquired in November 1999 by the Hubble Space Telescope, this image shows Saturn and its rings in all their glory. North is up. Under good conditions, a backyard telescope can reveal two major rings (outer A and inner B) and the dark Cassini Division separating them. The wide, bright band girding Saturn's middle is called the Equatorial Zone. Two publication-quality versions of this image are available for download by anonymous FTP: one with labels (299-kilobyte JPEG) and one without (298-kilobyte JPEG).