Note to Editors/Producers: This release is accompanied by high-quality graphics; see the end of this release.

This month we’re closer to Mars than Earth has come for almost 6½ years. The Red Planet appears brighter and bigger in the evening sky than it has since December 2007. 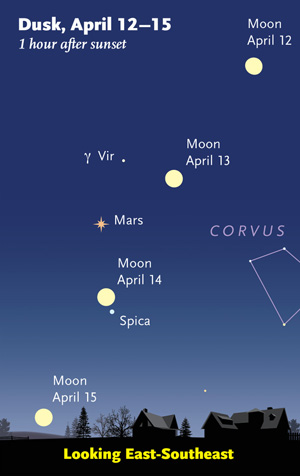 Mars will be its brightest in the second week of April. Use this diagram to find Mars in the dusk hours — click for a high-resolution version.

Anyone can spot Mars at a glance from anywhere in the world. During April it’s the brightest point in the southeast after dark (as seen from the world’s mid-northern latitudes. In the tropics, look east; in the south temperate latitudes, look northeast). Mars is moving though the constellation Virgo near the bright star Spica. This pairing offers a wonderful color contrast. Mars is the yellow-orange color of a campfire, while Spica, less bright, shines icy blue-white.

In the middle two weeks of April, Mars will shine with a brightness of magnitude -1.5, matching the luster of Sirius, and in a telescope it will appear 15.1 arcseconds across. April 8th is the planet’s opposition date: when it’s opposite the Sun in the sky. It passes closest to Earth on April 14th (the difference is due to the elliptical shape of Mars’s orbit.) But it appears practically the same size and brightness all month.

Mars and Spica cross the sky together from dusk to dawn. For telescope users, Mars is highest in the sky due south around the middle of the night.

A 4-inch or larger telescope on a night of steady atmospheric seeing will usually show at least a few light and dark regions, or albedo features, on the planet’s surface. The Martian northern hemisphere is tipped toward Earth this season, so amateur astronomers are able to track the North Polar Cap as it shrinks in the Martian northern hemisphere’s springtime. Backyard observers are already seeing the polar cap recede, exposing a ring of dark ground under its outer parts.

For more on Mars’s fine showing, including a telescopic Mars map, see the March issue of Sky & Telescope magazine.

Sky & Telescope is making the following photograph available to editors and producers. Permission is granted for one-time, nonexclusive use in print and broadcast media, as long as appropriate credits (as noted) are included. Web publication must include a link to SkyandTelescope.com. 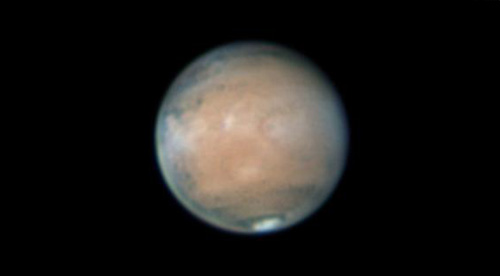 Mars as photographed in 2012 by S&T imaging editor Sean Walker with a 12.5-inch Newtonian telescope. Click image for higher resolution.

Sky Publishing (an F+W Media company) was founded in 1941 by Charles A. Federer Jr. and Helen Spence Federer, the original editors of Sky & Telescope magazine. In addition to Sky & Telescope and SkyandTelescope.com, the company publishes two annuals (Beautiful Universe and SkyWatch), as well as books, star atlases, posters, prints, globes, and other fine astronomy products.