Sky & Telescope magazine is releasing a new application for all Android mobile devices, S&T SkyWeek, and the publisher is making the app available to all users for free. "We thought it would be the perfect way to celebrate Sky & Telescope's 70th-anniversary year to make the app available to all astronomy enthusiasts for free," says Joel Toner, Vice President for Publishing of New Track Media, which publishes S&T. "We're doing the same thing with our Apple counterpart that has been available for purchase in the iTunes store." 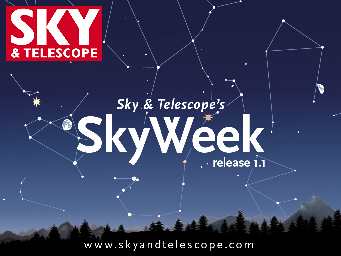 "The S&T SkyWeek Droid app is a follow-up to our S&T SkyWeek app for iPhones, iPads, and iPod Touches," says Sky & Telescope editor in chief Robert Naeye. "The app is based on our website's popular This Week's Sky at a Glance. But it goes beyond that. It gives the user a day-by-day report on the week's most exciting sky events, with a link to an interactive sky chart that tells you when and where to look to see the event. You can customize the map for your location."

"We designed the app to be extremely user friendly," adds Tim DeBenedictis, whose firm, Southern Stars, developed the app in partnership with Sky & Telescope. "It works on any Android phone running Android version 2.1 or higher — that's 95% of the installed base of Android phones. Doing it this way brings S&T's editorial expertise to millions of people worldwide who want to keep up with the ever-changing beauty of the night sky, and to find out more about what they're looking at."

S&T SkyWeek covers a wide variety of sky events, from planetary conjunctions to eclipses to meteor showers. It tells you what direction of the sky you should look, and what you may expect to see.

In addition to the Droid app, Sky & Telescope is making the Apple version of S&T SkyWeek available free of charge from the iTunes App Store. Previously, the app sold for $0.99.

To download the Android version of S&T SkyWeek, go to "Market" on the Android home screen and search for SkyWeek.

Sky Publishing (a New Track Media company) was founded in 1941 by Charles A. Federer Jr. and Helen Spence Federer, the original editors of Sky & Telescope magazine. In addition to Sky & Telescope and SkyandTelescope.com, the company publishes three annuals (Popular Astronomy, Beautiful Universe, and SkyWatch), as well as books, star atlases, globes, and other fine astronomy products.

New Track Media was formed in 2006 by Stephen J. Kent and Boston Ventures for the purpose of building a premier consumer enthusiast publishing platform in a range of special-interest subject areas. The company has since established an extensive crafts content group including magazines such as Fons & Porter's Love of Quilting, Creating Keepsakes, and other divisions such as Keepsake Quilting and Creative Crafts Group.