Cambridge, MA — Sky Publishing Corporation, the privately held publisher of astronomy periodicals and books, announced today that it has completed the sale of its business to New Track Media LLC, an entity formed in the fall of 2005 by Stephen J. Kent and Boston Ventures. Terms of the transaction were not disclosed.

Sky Publishing Corp. was founded in 1941 by Charles A. Federer Jr. and Helen Spence Federer, the original editors of Sky & Telescope magazine. Sky & Telescope is the world's most respected astronomy magazine, serving amateur astronomers around the globe. In addition to Sky & Telescope and SkyandTelescope.com, the company publishes Night Sky magazine (a bimonthly for beginners with a Web site at NightSkyMag.com), two annuals (Beautiful Universe and SkyWatch), as well as books, star atlases, posters, prints, globes, and other fine astronomy products. For New Track Media, which is based in Cincinnati, Sky represents its first transaction in a broader plan that calls for building a portfolio of consumer enthusiast properties, not all science-related, and largely through acquisition.

Key members of the Sky Publishing senior management are keeping their roles. Susan Lit, president and publisher, and Richard Tresch Fienberg, editor in chief, have both agreed to continue in their positions under the new ownership. Ms. Lit emphasized that Sky had not been considering a sale but saw this as an opportunity to associate with a group that has broader ambition for growth along with a proven track record in publishing. "I have known Stephen [Kent] for years," said Lit, "and when he announced his plans with Boston Ventures, this seemed like an opportunity to become a central piece of a new and exciting company. As an employee-owned company for 65 years we had to be assured that a new owner would value our independence and history, and at the same time be committed to our growth. New Track Media offered the growth opportunities and shared vision of entrepreneurial spirit." The company will continue to operate out of its offices in Cambridge, with plans to relocate to new offices in the Boston area within the next year.

New Track Media was formed in the fall of 2005 by Kent, with support from Boston Ventures, an established private equity firm with a longstanding media focus. Kent, who was most recently CEO of F+W Publications, is chief executive officer of New Track Media, LLC. "We couldn't have asked for a stronger brand to launch our new venture," said Kent. "Sky & Telescope has a rich history and established editorial authority in a category that is everlasting. We are proud to make it the cornerstone of New Track Media." According to Kent, "With the Sky acquisition complete, we are now eager to bring other prominent special-interest properties into the portfolio and hope that this will help others see that we're a buyer who can work quickly and confidentially toward completion."

Sky Publishing is pleased to make the following photo available to our colleagues in the news media. Permission is granted for one-time, nonexclusive use in print and broadcast media, as long as appropriate credit (as noted in the caption) is included. Web publication must include a link to SkyandTelescope.com. 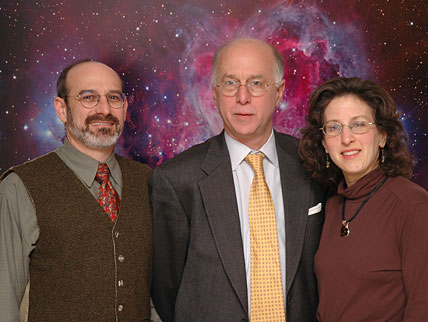 Editor in chief Rick Fienberg, CEO Stephen J. Kent, and president Susan B. Lit following the closing of the sale of Sky Publishing's assets to New Track Media. Click on the image to download a publication-quality version (764-kilobyte JPEG) by anonymous FTP.

About Sky Publishing
Sky Publishing Corp. was founded in 1941 by Charles A. Federer Jr. and Helen Spence Federer, the original editors of Sky & Telescope magazine. In addition to Sky & Telescope and SkyandTelescope.com, the company publishes Night Sky magazine (a bimonthly for beginners with a Web site at NightSkyMag.com), two annuals (Beautiful Universe and SkyWatch), as well as books, star atlases, posters, prints, globes, and other fine astronomy products.

About New Track Media
New Track Media LLC is wholly owned by BVK Holdings LLC, an entity formed by Boston Ventures and Stephen J. Kent for the purpose of building up a premier consumer enthusiast publishing platform in a range of special-interest subject areas. Astronomy and other science-related periodicals represent one focal point, but additional clusters of properties in other areas are also being explored. New Track Media and BVK operate from offices in Cincinnati, Ohio, which is where the firm has a corporate development team.

About Boston Ventures
Boston Ventures Management, Inc. (www.BostonVentures.com), is a private equity firm that has been an active investor and financial partner to management teams in the media, entertainment, publishing, information, and communications sectors since 1983, earning the firm a franchise position in the private equity community. Boston Ventures' general partners and principals are accomplished and experienced professionals who have a diverse and complementary range of skills, and a broad network of domestic and international relationships. Since its inception, Boston Ventures has invested approximately $2.2 billion in its target industries. The existing Boston Ventures Fund VI Partnership has attracted leading U.S. institutions and individuals from 16 countries.