Sky & Telescope, the most respected astronomy magazine in the world, will appear not only in English, but also in German. Astronomie Heute (Astronomy Today), the German edition of Sky & Telescope, will be published bimonthly starting in February 2003 with a distribution of 40,000 copies per issue in the first year.

"Outside of the United States and possibly Japan, Germany represents the world's biggest market for telescopes and accessories," says Susan B. Lit, president of Cambridge, Massachusetts-based Sky Publishing Corp., which has published Sky & Telescope continuously since November 1941. "So naturally we looked at Germany as the logical place to begin our expansion into non-English-speaking countries." 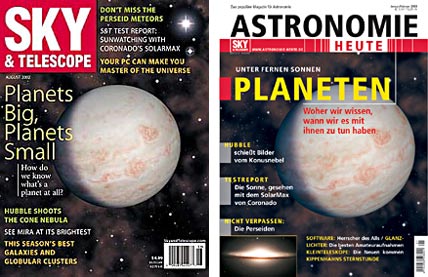 Sky & Telescope and a mockup of its new German edition, Astronomie Heute.

Astronomie Heute will be produced by German publisher Spektrum der Wissenschaft (Spectrum of Science) under license from Sky Publishing. "Spektrum is an ideal partner," says Lit. "As publisher of the German edition of Scientific American as well as several other titles, Spektrum is one of the most important players in the German-language market for popular-science magazines."

Dean Sanderson, Spektrum's managing director, says, "Astronomie Heute fills an obvious gap in the German amateur-astronomy market. "Our existing astronomy magazine, Sterne und Weltraum [Stars and Space], serves the most advanced hobbyists — of which Germany has many — but isn't as well suited to a broad readership as Sky & Telescope." He adds, "With both Astronomie Heute and Sterne und Weltraum, Spektrum will literally cover the full spectrum of interest in astronomy among German-language readers."

Astronomie Heute will appeal to astronomy practitioners at all levels, from the novice eager to purchase his or her first telescope, to the devoted amateur looking to enhance observing skills and equipment, to the professional desiring to keep up with this dynamic field. "Sky & Telescope offers its readers the best in news, product reviews, sky maps, astrophotos, and reports on discoveries in astronomy and space science," says Reinhard Breuer, editor in chief of the new German edition. "Astronomie Heute will offer its readers the same top-quality articles and graphics," he adds, "along with local news and events, enticing enthusiasts of all levels to become dedicated night-sky explorers."

"I'm confident that Astronomie Heute will be successful," says Richard Tresch Fienberg, editor in chief of Sky & Telescope magazine, "for the same reason that Sky & Telescope itself has been successful for more than 60 years: the knowledge, talent, and dedication of the people putting it together. Astronomie Heute's staff is remarkably similar to our own," adds Fienberg, "with a former research scientist at the helm and a crew of highly qualified science journalists and astronomy hobbyists eager to share their passion of the night sky with as many people as possible."