Note to Editors/Producers: This release is accompanied by a publication-quality graphic; see details below.

Many products that proclaim themselves "new and improved!" are really just the same old thing in a fancier package. That's not the case with the May 2004 issue of Sky & Telescope, which premiers a new design and enhanced editorial content. The magazine's editors and designers worked for nearly a year to make Sky & Telescope more readable, more useful, easier to navigate, and as beautiful as the night sky itself.

Design guru Ronn Campisi of Boston was brought in to lead the redesign effort, and he gave the magazine's pages a complete makeover to improve their appearance and readability. Highlights of the new design include a wider trim size, new paper with a bright, satiny finish, and new typefaces. Meanwhile the editorial content has been reorganized to present the science and hobby of astronomy more effectively. Several exciting new departments and columns are being introduced, and some old favorites are being expanded and/or renamed. 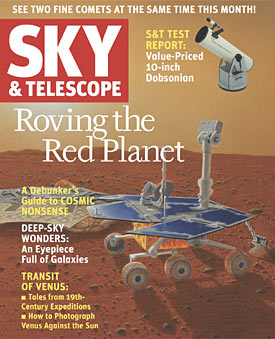 With its May 2004 issue, on newsstands in April, Sky & Telescope unveils a new design and enhanced editorial content. Click on the image above to download a publication-quality version (1.5-megabyte JPEG) by anonymous FTP. Permission is granted for one-time, nonexclusive use in print and broadcast media, as long as both Sky & Telescope and the cover artist, Don Davis, are credited. Web publication must include a link to SkyandTelescope.com.

Editor in chief Rick Fienberg says, "I'm happy with the magazine's new look, but I'm even happier with its new structure. As reflected in the new table of contents, Sky & Telescope is now logically organized into four main sections: News & Features, Observing & Exploring, Products & Reviews, and Activities & People. With articles grouped under common themes, it'll be easier to find what you're looking for, whatever your astronomical interests."

With Sky & Telescope's growing international presence, and with more northerners traveling to the Southern Hemisphere to see and photograph the treasures of the southern sky, the redesigned magazine now offers two large all-sky charts of the month's evening constellations, one for the north and one for the south.

Other redesign/editorial enhancements include these:

Exploring the Moon (formerly Lunar Notebook) has been moved forward and expanded so that columnist Charles Wood has more room to lead readers on monthly treks across our nearest and most telescopically rewarding celestial neighbor.

Deep-Sky Wonders, a staple of Sky & Telescope for most of its 62 years, is coming back after a decade-long hiatus caused by the death of revered columnist Walter Scott Houston. Sue French, whose Small-Scope Sampler column has been read enthusiastically by amateurs with telescopes big and small for the last 5 years, will pen the column.

A new department, Targets, will showcase timeless telescopic sights, and Observer's Log will revert to its original mission of reporting recent observations of events big and small by stargazers worldwide.

Each issue will include two S&T Test Reports — usually one hardware review and one software review — plus a Buyer's Guide covering a segment of the astronomy marketplace.

In response to reader requests, the magazine will include a new Q&A column to answer frequently asked questions about the hobby of backyard astronomy.

"We want to make sure we can continue to cover all the most interesting and exciting happenings in astronomy as effectively as possible, for a readership that's increasingly sophisticated, discerning, and international," says Fienberg. "With this redesign and revitalization of our content, we believe we have accomplished that objective."