Sky & Telescope proudly announces the launch of its new annual publication, Beautiful Universe, which will be available in time for the 2003 holiday season. Revealing the awe-inspiring beauty of the cosmos, it contains 100 pages of photographs from professional and amateur astrophotographers, the Hubble Space Telescope, robotic planetary explorers, and other ground- and space-based telescopes. Printed on high-quality paper, Beautiful Universe will be available on newsstands on November 18th for $9.99 ($12.99 in Canada). Consumers can buy direct from Sky Publishing, via its Web site SkyandTelescope.com or toll-free number 800-253-0245, for $1 off the newsstand price. 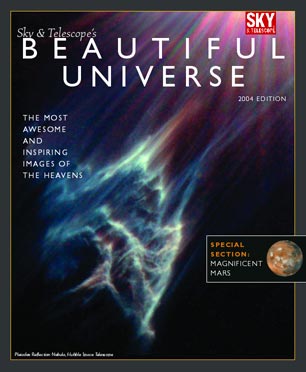 The premiere edition of Beautiful Universe will be available from Sky & Telescope in November 2003.

The magazine is divided into five distinct galleries: Amateur Astrophotos, Professional Astrophotos, Exploring the Solar System, the Invisible Universe (ground- and space-based radio, infrared, ultraviolet, X-ray, and gamma-ray images), and a special bonus section on magnificent Mars, which will be the highlight of the evening sky later this year. These five collections of dazzling images are prefaced by eloquently written essays from astronomical experts. Every photograph is accompanied by a short, descriptive caption.

Sky & Telescope's creative director, Sandra Salamony, is heading the project and believes the special issue will be a big hit. "Gallery, the section of Sky & Telescope that showcases astrophotos, is one of our best-read features," says Salamony, who has art directed Sky & Telescope for 6 years. "We are expanding on the concept of Gallery by creating a unique keepsake publication — these images are simply breathtaking."

"You don't have to be knowledgeable about astronomy to feel inspired by astronomical images," says Rick Fienberg, editor in chief of Sky & Telescope. "The allure of these photos crosses all demographic and educational levels," he continues. "Beautiful Universe will appeal to a broad audience of astronomers, photographers, and art lovers."