On Sunday, June 20th, at 8:57 p.m. Eastern Daylight Time, the Sun will reach its northernmost point in the sky for the year 2004 and begin its six-month return journey southward. This moment marks the June solstice, the official beginning of summer in the Northern Hemisphere and winter in the Southern Hemisphere.

The seasons’ starting times are governed by the Earth’s motion around the Sun — or equivalently, from our point of view, the Sun’s annual motion in Earth’s sky. The start of summer (for the Northern Hemisphere) is defined as the moment when the Sun hovers over Earth’s Tropic of Cancer (the line of latitude 23½° north of the equator) before heading south — a moment called, by Northerners, the summer solstice.

The word solstice comes from the Latin solstitium — sol meaning "sun" and –stitium "stoppage." The summer solstice marks the longest day and shortest night of the year. It is also the time when the days begin to grow shorter and the nights longer.

The summer solstice is sometimes called midsummer. Ancient peoples used to gather at midsummer to celebrate the life-giving power of the Sun. Even today thousands still flock to Stonehenge, the ancient stone circle on England's Salisbury Plain, to greet the dawn on the summer solstice. As seen from inside the inner circle of large stones on this day, the Sun rises over the Heel Stone, which lies outside the main ring.

Sky & Telescope is making the following animation and illustration available to the news media. Permission is granted for one-time, nonexclusive use in print and broadcast media, as long as appropriate credits (as noted in each caption) are included. Web publication must include a link to SkyandTelescope.com.

As seen from the Earth, during the course of a year the Sun migrates from north to south and back again. The Sun is farthest north at the June solstice, farthest south at the December solstice, and crosses the celestial equator at the equinoxes in March and September. These frames are from a 6.7-megabyte QuickTime animation suitable for television broadcast and available for downloading by anonymous FTP (just click on the image). 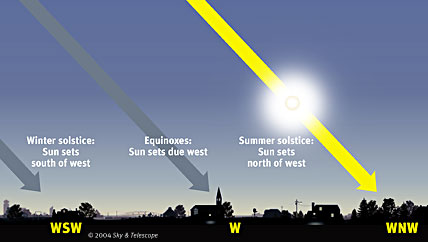 The Sun rises due east and sets due west on the equinoxes in March and September. At other times of year it comes up and goes down somewhat to the north or south. Click on the image to download a publication-quality version (122-kilobyte JPEG) by anonymous FTP.