Starry, Starry Night Becoming a Thing of the Past

When rolling blackouts swept through California during the state's 2001 energy crisis, two things became clear: there are more stars in the night sky than most city-dwellers realized, and far too much electricity is wasted on inefficient outdoor fixtures that send much of their light directly up into the sky.

On October 25-26, California energy officials will join with lighting specialists from throughout the U.S. and Canada at the fall 2002 meeting of the International Dark-Sky Association (IDA). They'll be taking aim at the ubiquitous pall of urban skyglow known as "light pollution," its effects on our health and our society, and what can be done to halt and reverse its spread. (A preliminary meeting program appears below.)

Satellite images dramatically reveal that for most people the sky never becomes truly dark and that, sadly, the starry, starry night has become a thing of the past. Two-thirds of Americans and Europeans can no longer discern our own galaxy, the Milky Way, with the naked eye. That's because almost of a third of the light used outdoors escapes upward, totally wasted, into the night sky. About 2,500 individual stars should be visible to the human eye in an unpolluted night sky. But in a typical suburb only 200 to 300 stars are visible, and in a city fewer than a dozen stars may shine through the ever-present skyglow.

The IDA estimates that each year in the United States, more than $1 billion is spent to generate that wasted light — resulting in the needless burning of some 6,000,000 tons of coal annually.

Light pollution also causes problems for human and animal health. When light interrupts the sleep cycle, the body reduces or halts its production of melatonin, a compound that clinical research has linked to a variety of negative health factors. Artificial light confuses sea turtles trying to lay their eggs on the beach and may be contributing to their dwindling numbers. Migrating birds often lose their way when they fly over the bright lights of a city, sometimes circling until they die of exhaustion.

Sky & Telescope and the IDA invite members of the press to attend the sessions on Friday, October 25th. This first day of invited talks and panel discussions will take place in Cahners Theater at the Boston Museum of Science. It will showcase speakers from the lighting industry, government agencies, power-utility companies, and others from the fields of medicine, environmental science, and astronomy.

The second day of the meeting, Saturday, October 26th, will convene in Phillips Auditorium at the Harvard-Smithsonian Center for Astrophysics in Cambridge. Saturday's four sessions will be aimed at more technical talks among those groups actively involved in outdoor-lighting issues. Phillips has seating for about 150, and thus Saturday's sessions will not be advertised to the public or the news media. Given enough notice, however, we will try to arrange interviews with invited speakers and other experts in attendance.

Sky & Telescope is pleased to make the following photograph available to the news media. Permission is granted for one-time, nonexclusive use in print and broadcast media, as long as appropriate credit (as noted in the caption) is included. Web publication must include a link to http://SkyandTelescope.com/. 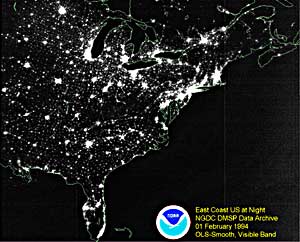 Billions of watts of wasted electricity stream continually into space as light from cities and towns in eastern North America. Although light pollution can never be completely eliminated, better commercial and municipal lighting practices could reduce it significantly. This 1994 satellite image is from the Defense Meteorological Satellite Program. Click on the image above to download a 1-megabyte TIFF version by FTP.

Session 3: Environmental and Ecological IssuesA discussion of issues involving the effects of outdoor light on flora and fauna — a good transition topic between medical effects and energy issues.

Session 4: Government, Industry, and YouA discussion of issues involving local, state, and national government as they interrelate to the lighting industry and to the general public, including energy consumption/costs and the IESNA's new ETAL-based standards.

Session 6: Legal IssuesWith many new lighting ordinances and laws going into effect, this session will discuss the legal issues surrounding outdoor night lighting, including the enforcement (and enforceability) of laws/ordinances and results of previous litigation.

Session 7: Lighting-Industry IssuesA reality check provided by lighting designers, manufacturers, and power-utility representatives, in the context of what's "best" vs. what the marketplace wants.

Session 8: Research and Education/Outreach IssuesA review of ongoing and needed research, the prospect of establishing a centralized information database, and discussion about how education and outreach efforts might advance the cause of better outdoor night lighting.

(Additional details are available on the IDA's meeting page.)

About the IDA
Incorporated in 1988, the International Dark-Sky Association (www.darksky.org) currently has nearly 10,000 members worldwide, including affiliated chapters in most U.S. states and 11 other countries. The organization's goals are to be effective in stopping the adverse environmental impact on dark skies by building awareness of the problem of light pollution and of its solutions, and to educate everyone about the value and effectiveness of quality nighttime lighting. The IDA believes in a united approach that is very supportive of the many local and individual efforts.

About Sky & Telescope
Sky Publishing Corp. was founded in 1941 by Charles A. Federer Jr. and Helen Spence Federer, the original editors of Sky & Telescope magazine. The company's headquarters are in Cambridge, Massachusetts, near the Harvard-Smithsonian Center for Astrophysics. In addition to Sky & Telescope and SkyandTelescope.com, the company publishes an annual magazine called SkyWatch as well as books, star atlases, posters, prints, globes, and other fine astronomy products.