Telescopes are on almost every kid's holiday wish list. A telescope is a popular gift, and most manufacturers see a huge increase in sales every December. But buyer beware: A telescope should not be bought on impulse. If you get a telescope that you can't aim or can't focus, it's more likely to end up collecting dust in a closet than collecting starlight in your backyard.

"Don't expect a lot from any telescope costing much under $200, and certainly be wary of anything sold in a toy shop or department store," says Rick Fienberg, editor in chief of Sky & Telescope magazine. "The store's telescope buyers probably know next to nothing about what they're purchasing — they're more concerned with the discount they get from the wholesaler than with the quality of the scopes themselves. Our advice to our readers," Fienberg continues, "is to do some research before buying, then go to a reputable store or online dealer that specializes in telescopes or related products, such as cameras or consumer electronics."

The following is advice that you, as a consumer-interest reporter or science journalist, can provide to your viewers, listeners, or readers as they embark on their search for a telescope that will be used rewardingly all year round.

Telescopes come in many shapes, sizes, and prices. Despite their varied appearances, though, all scopes can be divided into three classes: refractors (those that use lenses), reflectors (those with mirrors), and catadioptrics (hybrids of the two). Each has its strengths and weaknesses, but all share the same function: to gather light from a distant object and form a sharp image that can be scrutinized by eye or camera. 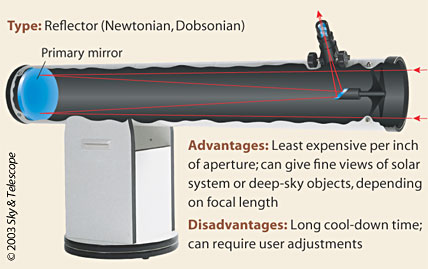 The primary difference between reflectors, refractors, and catadioptric telescopes is revealed in the path that light travels through each scope. 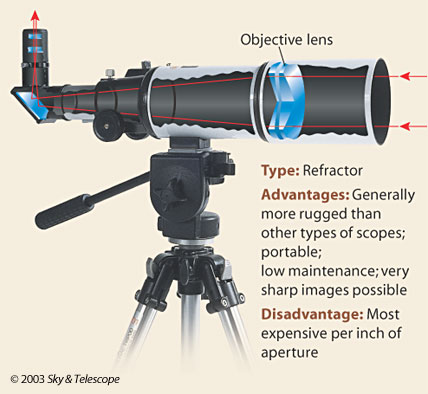 The primary difference between reflectors, refractors, and catadioptric telescopes is revealed in the path that light travels through each scope. The Schmidt- and Maksutov-Cassegrains are popular examples of catadioptric telescopes; the Maksutov (not shown) has a slightly different corrector lens than the Schmidt. Also not shown are Schmidt- and Maksutov-Newtonians, which resemble regular Newtonian reflectors but have a corrector lens in front. 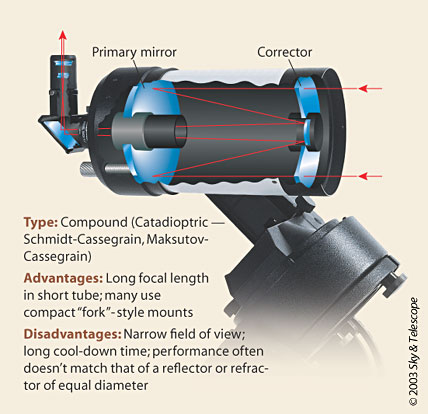 Here are three QuickTime movies that show how starlight travels through these different types of telescopes to reach the eyepiece (each movie file is about 1 megabyte in size, with artwork by Gregg Dinderman and animation by Brett Pawson):

Whatever design (or variant) you eventually choose, the utmost priority should be given to optical quality. It's the key to good telescopic performance. Running a close second is a solid, steady mount with smooth motions. If at all possible, try before you buy — visit a local astronomy club and look through members' scopes to see which ones you like. If you purchase a unit from a mail-order company, make sure there is a good return policy. And don't forget to save some of your budget for essential accessories like additional eyepieces and a good star atlas.

The aperture (diameter) of the primary lens or mirror in your telescope determines two things: light-gathering power and resolving power (the ability to see fine detail). The larger the aperture, the more light your scope collects and the fainter the objects you can see. With increased aperture also comes increased resolution — a larger telescope will reveal smaller features on the Moon and planets and will separate closer double stars.

The distance from the primary lens or mirror to the point where the image of a distant object comes into focus is called the focal length. The magnification, or power, of any telescope/eyepiece combination is easy to calculate: simply divide the focal length of the scope by that of the eyepiece. So a 25-mm eyepiece used with a refractor having a focal length of 900 mm gives 36 power (900 / 25 = 36), usually written as 36x. As a general rule, twice the aperture in millimeters (or 50 times the diameter of the primary lens or mirror in inches) is the maximum usable magnification. Beyond that, the image gets so faint and fuzzy that it seems forever out of focus. And there will be nights when the atmosphere is not steady enough to use powers anywhere near that maximum figure. If you see a 50- or 60-mm (2- or 2.4-inch) refractor advertised as "500 power!" you know you're being suckered — such instruments should never be used at magnifications higher than about 100x.

Beginners are frequently surprised at how small a window on the sky their scope presents when used at medium to high powers. Eyeballing along the tube to locate the Moon or a bright star or planet isn't too difficult, but searching for a faint galaxy using this method can be particularly frustrating. It follows that all scopes — irrespective of type or design — should be equipped with a high-quality finder, an observing aid that assists in locating celestial objects. 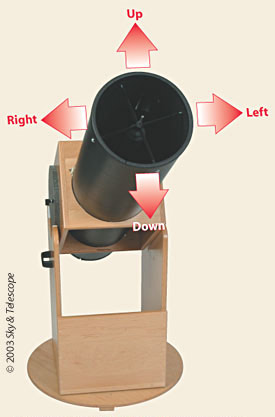 A telescope on an altazimuth mount simply moves up-down (altitude) and left-right (azimuth). This means that the user often has to nudge the scope in two directions simultaneously to compensate for the Earth's rotation and follow a celestial object.

A telescope with the finest optics will be rendered useless without a suitable mount. A good mount has three principal functions: hold the instrument firmly with little vibration, allow the tube to be pointed to any part of the heavens quickly and accurately, and permit smooth and precise tracking of a celestial object as the Earth's rotation carries it from east to west across the sky. Two basic types of mounts accomplish these tasks: altazimuth and equatorial.

Altazimuth mounts, which move up-and-down and side-to-side, can certainly be used for astronomical observations, but you may be frustrated by the continual need to make simultaneous manual corrections for two axes. Unless you have a motor-driven altazimuth mount, for high-magnification visual observations — and especially for astrophotography — you'll probably want an equatorial mount. 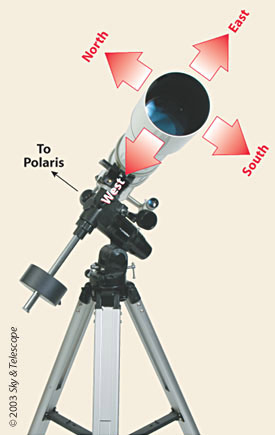 An equatorial mount allows a scope to move in the celestial directions of north-south and east-west. As the Earth spins, an observer can easily track celestial targets by moving the telescope in only one direction (to the west).

An equatorial also possesses two axes, but one of them is made parallel to the Earth's axis of rotation by being pointed at the north or south celestial pole. Once a celestial object has been found, the scope need only be rotated about its "polar" axis to keep the object in view.

The next level of control uses a home computer or a built-in logic unit to drive the mount's motors. Once properly initialized, the computer takes over and can automatically aim the telescope at any desired object and track it as it moves across the sky. This is the essence of a "Go To" telescope. Its ability to find any celestial body at the push of a few buttons explains the enormous popularity of such scopes. "So I don't need to learn how to find stuff? Cool!" you may be thinking. Not so! At present, all entry-level roboscopes require you to enter your viewing location (or the nearest city), as well as the date and time at the beginning of an observing session. You'll also need to point the scope at two or three bright stars or planets in order to synchronize the instrument's coordinate system with that of the sky.

Also keep in mind that you're paying for this convenience — and the cost is often measured in terms of aperture. For the price of a 3- or 4-inch Go To scope, you could acquire an 8-inch scope without a computer. Of course, the latter will be bigger and heavier to lug around.

To learn more, see "Buying the Best Telescope" by S&T contributing editor Alan Dyer, and "The 5 Best Budget Telescopes" by the editors of Sky & Telescope, in our annual publication SkyWatch '06. These articles are followed by a buyer's guide to 195 complete telescope systems priced from $209 to $4,800.

And don't miss Night Sky, our new bimonthly magazine for beginning stargazers; see it at NightSkyMag.com. Every issue contains expert advice on choosing and using telescopes and accessories vital to the enjoyment of backyard astronomy.

Journalists may also download a free copy of "Be Scope Savvy," which appeared several years ago in SkyWatch '03. The article is available as a 469-kilobyte Adobe Acrobat PDF. (Please don't point the public to this URL, as our FTP server cannot handle lots of traffic.) If you don't already have the free Adobe Acrobat Reader software on your computer, visit Adobe's Web site.

Sky & Telescope maintains a searchable directory of astronomy clubs around the world on its Web site. The site also contains many articles on choosing and using telescopes and accessories (in the How To section) and a list of telescope manufacturers and dealers that advertise in Sky & Telescope magazine (in the Resources section).