Total Lunar Eclipse to Occur on the Night of Oct. 27th

Note to Editors/Producers: This release is accompanied by high-quality graphics and an animation; see details on page 2.

On Wednesday evening, October 27th, the full Moon will pass through the Earth's shadow for skywatchers all across the Americas. The total phase of the eclipse will last 1 hour and 22 minutes, and the Moon will be conveniently high in the eastern sky after dark while most people are still awake and about.

In fact, the eclipse occurs during Game 4 of baseball's World Series, which the Boston Red Sox and St. Louis Cardinals are scheduled to play that evening in Missouri. According to astronomer and meteorologist Joe Rao, this is the first time a total eclipse of the Moon will be visible from a major league ballpark during a World Series game, and such a coincidence is not likely to happen again until the second half of this century.

The only slightly problematic area will be near the West Coast of North America, where the partial phase of the eclipse will begin just a few minutes after sunset and moonrise while the sky is still bright. But if you have an open view low to the east, even this situation will only add to the drama. As twilight fades, westerners will see the shadow-bitten Moon coming into stark view low above the landscape, and by the time total eclipse begins, the sky will be getting quite dark and the Moon will be fairly high.

Europe and much of Africa also get a good view of this eclipse, but at a less convenient time: before dawn on Thursday morning, October 28th.

A total lunar eclipse occurs when the Sun, Earth, and Moon form a nearly straight line in space, so that the full Moon passes through Earth's shadow. Unlike a solar eclipse, which requires special equipment to observe safely, you can watch a lunar eclipse with your unaided eyes. Binoculars or a small telescope will enhance the view dramatically.

As the Moon moves into the outer fringe, or penumbra, of Earth's shadow, it will fade very slightly — imperceptibly at first. Only when the leading edge of the Moon is at least halfway into the penumbra is any shading visible at all.

The real show starts when the Moon's leading edge first enters the shadow's dark core, or umbra, and the partial eclipse begins. For the next 1 hour and 9 minutes, more and more of the Moon will slide into dark shadow.

The total eclipse begins when the Moon is fully within the umbra. But it likely won't be blacked out. The totally eclipsed Moon should linger as an eerie, coppery red disk in the sky, as sunlight scattered around the edge of our atmosphere paints the lunar surface with a warm glow. This is light from all the sunrises and sunsets that are in progress around Earth at the time.

Each total lunar eclipse is different. Sometimes the Moon looks like an orange glowing coal, while at other times it virtually disappears from view. Its brightness depends on the amount of dust in the Earth's upper atmosphere at the time, which influences the amount of sunlight that filters around the Earth's edges. Because the Moon passes through the northern half of the umbra during this month's event, the Moon's northern edge may remain fairly bright.

A lunar eclipse offers a great chance for either still or time-lapse photography, especially if you have a long lens or can shoot through a telescope. See "Observing and Photographing Lunar Eclipses" on SkyandTelescope.com for tips on how to get good results with film and digital cameras.

Wednesday night's total eclipse of the Moon is the first one visible in North America since November 8, 2003. The next total lunar eclipse occurs in 2½ years, on March 3, 2007, and favors Europe, Africa, and the Middle East, though skywatchers on the east coast of the Americas will also see much of it, weather permitting.

Sky & Telescope is making four illustrations, two photographs, and one animation available to editors and producers. Permission is granted for one-time, nonexclusive use in print and broadcast media, as long as appropriate credits (as noted in each caption) are included. Web publication must include a link to SkyandTelescope.com. 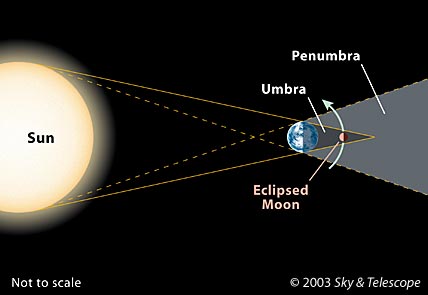 A lunar eclipse occurs when the Moon passes through the shadow cast by the sunlit Earth. Like any shadow, it has two components: the outer, lighter penumbra and the inner, much darker umbra. When the Moon enters the penumbra, where just part of the Sun's light is blocked, it becomes only slightly dimmer. Only when it passes into the umbra does it look markedly different. But even when completely within the umbra, the Moon does not disappear altogether. Sunlight skims through the Earth's atmosphere and is refracted (bent) into the shadow, casting a reddish tinge upon the lunar surface. The diagram is not to scale. Click on the image to download a publication-quality JPEG (399 kilobytes) by FTP; the illustration is also available without labels (344 kilobytes). 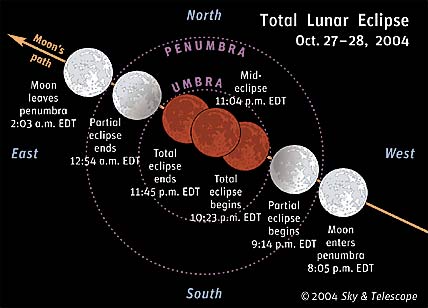 A lunar eclipse occurs when the Moon passes through the shadow cast by the sunlit Earth. Like any shadow, it has two components: the outer, lighter penumbra and the inner, much darker umbra. When the Moon enters the penumbra, it becomes only slightly dimmer. Only when it passes into the umbra does it look markedly different. On the night of October 27–28, 2004, the Moon crosses deep inside the northern part of the umbra. The partial phases before and after totality occur while the Moon is moving across the umbra's edge. Much less noticeable are the stages when the Moon is in the penumbra. Click on the image to download a publication-quality JPEG (196 kilobytes) by anonymous FTP. 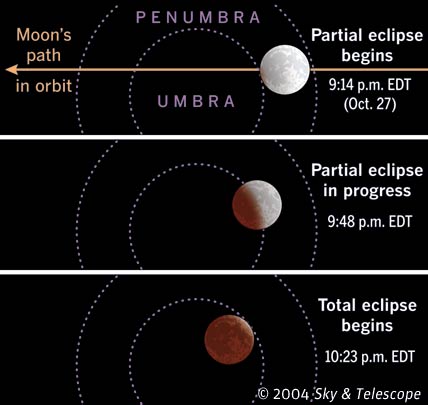 This sequence of events shows what will happen when the October 2004 full Moon slides through Earth's shadow. The shadow, usually invisible against the blackness of space, has two parts: the dark central umbra and the much lighter penumbra, or outer fringe. Click on the image to download a publication-quality JPEG (199 kilobytes) by anonymous FTP; the high-resolution image shows the entire eclipse on seven panels, not just the beginning of the event as shown on the three panels visible here. 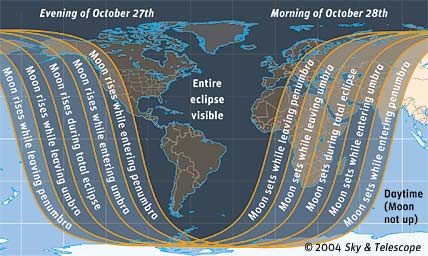 This map shows whether the Moon will rise or set during any phase of the eclipse for observers across the globe. Because an eclipsed Moon is always full, the Sun sets or rises almost simultaneously — on the opposite horizon. Click on the image to download a publication-quality JPEG (282 kilobytes) by anonymous FTP. 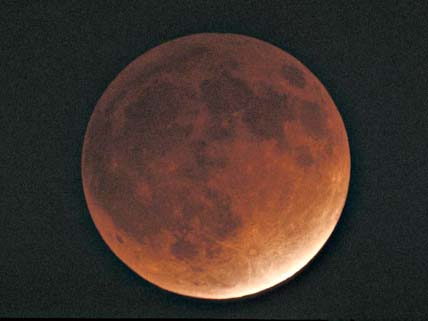 On November 18-19, 1975, Sky & Telescope's Dennis di Cicco captured this image of the totally eclipsed Moon. Totality on October 27-28, 2004, will look somewhat different, as the eclipsed Moon will be deep in the northern part of the Earth's shadow, rather than near the southern edge as in 1975. Click on the image to download a publication-quality JPEG (3.4 megabytes) by anonymous FTP.

Aligning his camera on the same star for nine successive exposures, Sky & Telescope contributing photographer Akira Fujii captured this record of the Moon’s progress dead center through the Earth’s shadow in July 2000. On October 27-28, 2004, another total lunar eclipse will be visible from North America — right in the middle of World Series Game 4! Click on the image to download a publication-quality JPEG (1.5 megabytes) by FTP.

This 10-second animation of a total lunar eclipse consists of 291 black-and-white images taken on September 27, 1996. In this sequence, 1 second represents 30 minutes of elapsed time. Coloring has been added to simulate the Moon's appearance when it was completely within Earth's shadow; the totally eclipsed Moon has been brightened for clarity. During totality, dark, murky blobs are seen crossing the lunar disk — an effect caused by variations in the tiny amount of sunlight that leaks onto the Moon after being refracted (bent) through Earth's atmosphere. This can be viewed or downloaded by FTP as a broadcast-quality (3.7-megabyte) QuickTime animation.