Note to Editors/Producers: This release is accompanied by high-quality graphics; see end of release.

For more information, and a world map of the eclipse's visibility, please direct your readers/viewers to our online story about the eclipse.

Everyone throughout North and Central America has a front-row ticket, weather permitting, for a total eclipse of the full Moon high in the sky late Monday night and/or Tuesday morning (the night of December 20-21, 2010).

Earth's shadow will totally engulf the Moon, turning it spooky orange-red, from 2:41 to 3:53 a.m. Eastern Standard Time, or 11:41 p.m. to 12:53 a.m. Pacific Standard Time, as shown in the timetable below. The eclipse will be partial for a little more than an hour before and after.

Unlike an eclipse of the Sun, an eclipse of the Moon is visible to everyone on the entire Moon-facing side of Earth at once. “We’re all looking at this together,” says Sky & Telescope editor in chief Robert Naeye.

Program for the Show

A total lunar eclipse has five stages. It begins when the Moon first enters the penumbra, or pale outer fringe, of Earth's shadow. But that event can't be seen; the shading in the outer part of the penumbra is extremely slight. Only when the Moon's leading edge is about halfway across the penumbra does the first slight dimming become detectable to the eye.

The second stage, partial eclipse, starts when the Moon's edge reaches the umbra, or Earth's inner shadow. “It's eerie watching this weird, red-brown shadow creeping across the bright Moon,” says Sky & Telescope senior editor Alan MacRobert. “Look carefully, and you’ll notice that Earth's shadow has a curved edge. This was the first visible proof to the ancients — at least to those who knew what they were seeing, like the Greeks — that the Earth is round.”

As more of the Moon slides into the umbra, look around the sky. A second, deeper night is falling — “night within night,” says MacRobert. If you're far from city lights, hundreds of additional stars start appearing in what just a little earlier was a bright, moonlight-washed sky. An hour or so into partial eclipse, only a final bright sliver of Moon remains outside the umbra — and the rest of it shows an eerie reddish glow.

The third stage, total eclipse, begins when the last bit of Moon slips into the umbra. For this eclipse, totality lasts a generous 72 minutes, during which the Moon looks, says MacRobert, “like a luminous rotten orange.”

Then, as the Moon continues moving eastward along its orbit, events unwind in reverse order. Totality ends when the Moon's leading edge reemerges into sunlight, returning once again to partial eclipse (stage four). Then, after all of the Moon escapes the umbra, the dusky penumbral shading (stage five) gradually fades away, leaving the full Moon shining as brightly as if nothing had happened.

Red in the Darkness

The umbra is the part of Earth's shadow where the Sun is blocked from the Moon completely. So why does the Moon here glow deep orange or red, rather than being totally blacked out?

“That red light you see on the Moon during a lunar eclipse comes from all the sunrises and sunsets around the Earth at the time,” says Naeye. Our atmosphere scatters and refracts (bends) the sunlight that grazes the rim of our globe, sending it into Earth's shadow. “If you were an astronaut standing on the Moon and looking up into the sky, the situation would be obvious,” he says. “You would see the Sun covered up by a dark Earth that was ringed all around with a thin, brilliant band of sunset- and sunrise-colored light, bright enough to dimly light the ground at your feet.”

On rare occasions the eclipsed Moon does go black. Other times it appears as bright and coppery orange as a fresh penny. And sometimes it turns brown like chocolate, or as dark red-black as dried blood. Two factors affect an eclipse's color and brightness. The first is simply how deeply the Moon goes into the umbra. The center of the umbra is much darker than its edges. This time the Moon will pass fairly deep through the umbra, and at mid-eclipse the Moon's southern limb almost reaches the umbra's center. The other factor is the state of Earth's atmosphere along the sunrise-sunset line. If the air is very clear, the eclipse is bright. But if a major volcanic eruption has polluted the stratosphere with thin haze, the eclipse will be dark red, ashen gray-brown, or almost black.

In addition, a little blue light refracted by Earth's clear, ozone-rich upper atmosphere can also add to the scene, especially near the umbra's edge, creating a subtle mix of changing colors. Such variable shading can give the eclipsed Moon a very three-dimensional appearance.

The next eclipse of the Moon is a deep total one on June 15, 2011, but North America misses out for this one; our side of the world will be facing the wrong way.

Skywatchers on the West Coast can catch part of the following one, on the morning of December 10, 2011, until it's interrupted by moonset and sunrise.

The next total lunar eclipse for the whole continent doesn't come until April 14-15, 2014 — an unusually long wait. So hope for good weather this time!

For more skywatching information and other astronmomy news, visit SkyandTelescope.com or pick up Sky & Telescope the essential magazine of astronomy since 1941.

Sky & Telescope is making the following photographs available to editors and producers. Permission is granted for one-time, nonexclusive use in print and broadcast media, as long as appropriate credits (as noted) are included. Web publication must include a link to SkyandTelescope.com. 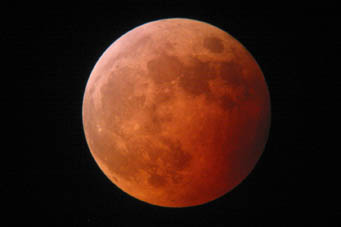 Aligning his camera on the same star for nine successive exposures, Sky & Telescope contributing photographer Akira Fujii captured this record of the Moon”™s progress dead center through the Earth”™s shadow in July 2000. This image is available as a publication-quality JPEG (1.5 megabytes).