The text and illustrations are for the world's mid-northern latitudes, including the U.S. and Canada, Europe except its north, the Middle East, China, Korea, and Japan.

Look low in the west-northwest after sunset in late May, and you can watch Venus, Jupiter, and Mercury pirouetting through the tightest gathering of three naked-eye planets that the world will see until 2026.

"Here's a beautiful chance to see three planets all together," says Alan MacRobert, a senior editor at Sky & Telescope magazine. "Add the Earth under your feet, and you're seeing half of the solar system's planets at once. They'll be a lovely part of the spring twilight."

"The view should be best about 30 to 45 minutes after sunset," continues MacRobert. "And think 'photo opportunity'. Set up a camera on a tripod, zoom to the max, and try different time exposures."

The show will continue with two of the planets well into June.

Here's a video; the individual daily sky scenes are below (click on each for a larger version), with a timetable of events. All material is free for use with a credit to Sky & Telescope. Online use must include a link to SkyandTelescope.com. 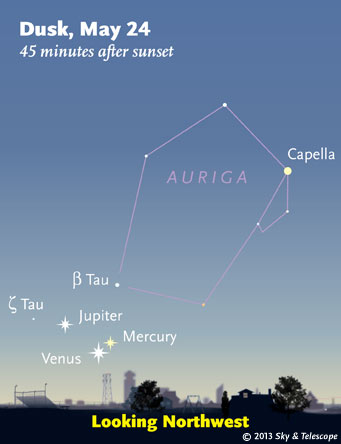 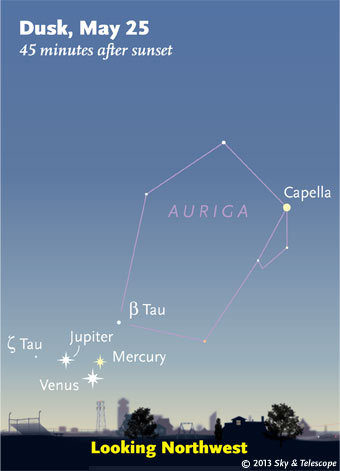 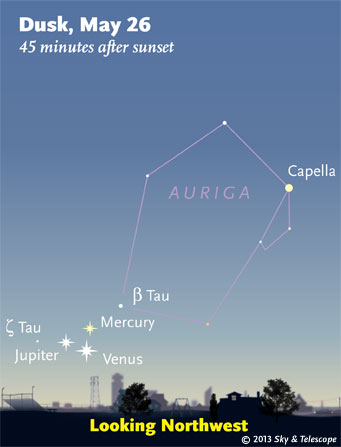 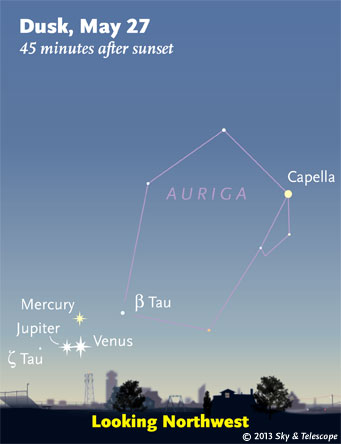 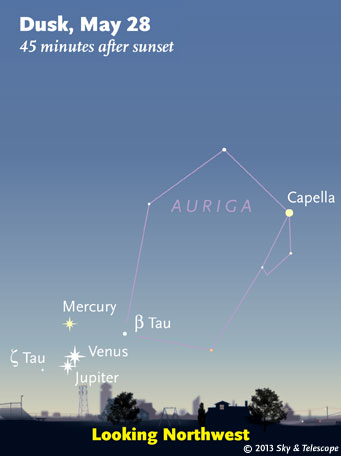 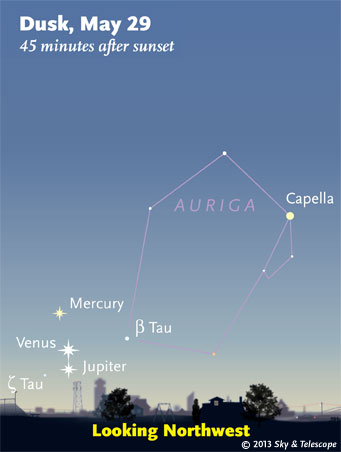 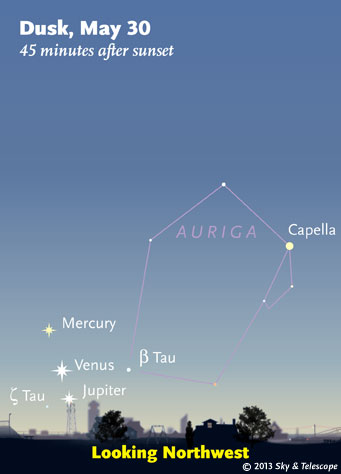 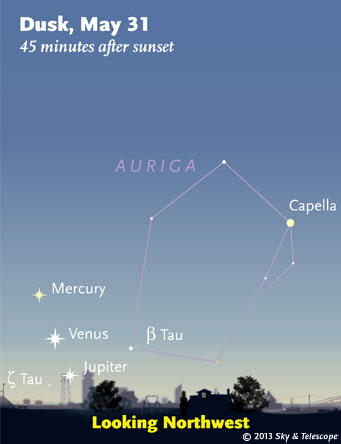 Credit: Sky & Telescope magazine. Online use must include a link to SkyandTelescope.com.

The fine print about these: The visibility of the fainter stars in bright twilight is exaggerated here; you may want to omit them. You can mention in a caption that each scene is about three times as wide as your fist held at arm's length. The scenes are drawn for a skywatcher at 40° north latitude but will be good enough at least 10 or 15 degrees north or south of there. Click each image for a hi-res version.

May 20–23: Venus and Jupiter, the brightest two planets of the solar system, have been approaching each other in the western evening sky for weeks. As they're drawing together, Mercury — currently the third-brightest planet — climbs up from the horizon to join them. By May 20th you should be able to spot Mercury to the lower right of the other two. It moves up closer to bright Venus for the next few days.

May 24: Venus, Jupiter, and Mercury now all fit within a 5° circle. That means you could cover them with a golf ball held at about arm's length. And you can view all three at the same time in most binoculars. They'll stay within a 5° circle until May 29th.

May 26: The grouping is now tightest; all three planets fit in a 2½° circle, forming a striking little triangle. Your thumb at arm's length will just about cover them.

May 27: Jupiter appears right next to Venus. After this, Jupiter pulls down and right of Venus and Mercury, disappearing from view in early June.

May 28 and afterward: Mercury, meanwhile, is coming into its own. It's entering its best evening showing of 2013, soaring ever higher above Venus until about June 7th. At that point it slowly begins to sink back toward Venus and also starts fading — slowly at first, then increasingly fast after mid-June.

The fainter star Elnath or Beta (β) Tauri, which appears with them in the scene, is more than a million times farther in the background at a distance of 130 light-years.

For skywatching information and astronomy news, visit SkyandTelescope.com or pick up Sky & Telescope, the essential guide to astronomy, with subscribers in more than 100 nations. Sky Publishing (a New Track Media company) was founded in 1941 by Charles A. Federer, Jr. and Helen Spence Federer, the original editors of Sky & Telescope magazine. In addition to Sky & Telescope and SkyandTelescope.com, the company publishes two annuals (SkyWatch and Beautiful Universe) as well as books, star atlases, observing guides, globes, apps, and other fine astronomy publications.