As the gift-giving season comes to an end, maybe now you've got a shiny new telescope to call your own. Congratulations — you're on your way to discovering many amazing things in the night sky. Be it a long, sleek tube or a compact marvel of computerized wizardry, every new telescope surely has an owner itching to try it out.

"Here are two important tips," advises Robert Naeye, editor in chief of Sky & Telescope magazine. "First, set up your scope indoors and make sure you understand how everything works before you take it out into the night." Trying to figure out unfamiliar knobs and settings in the dark and cold is no fun.

"Second," he adds, "be patient. Spend time with each sky object you're able to find, and really get to know it." Too many first-time telescope users expect Hubble-like brightness and color in the eyepiece — when in fact most astronomical objects are very dim to the human eye. And our night vision sees almost everything as shades of gray. Much of what the universe has to offer is subtle, and of course extremely distant.

On the other hand, the Moon and planets are bright and easy to find. These make excellent first targets for budding skywatchers. Here are some suggestions for getting the best possible views of them.

The Moon is one celestial object that never fails to impress when seen in a telescope. It’s our nearest neighbor in space — big, bright, beautifully bleak, and just a quarter million miles away. This makes the Moon a wonderful target for even the most humble astronomical instrument. An amateur telescope can keep you busy on the Moon forever.

During the first week of January 2012 the Moon is excellently placed in the evening sky. Use your telescope to explore the thousands of impact craters and the dark lunar "seas," vast lava plains that formed billions of years ago. The craters will appear in sharpest relief along the line dividing lunar day and night, called the terminator. Here the sunlight comes in at a low slant and shadows stand out starkly.

For guided tours of lunar features to seek out with your new telescope, see our online articles Take a Moonwalk Tonight and A Month of Moonwatching.

As soon as the Sun sets, you'll see a dazzlingly bright "star" in the southwest. That's the planet Venus, our closest planetary neighbor. If you point your telescope its way, you'll see a small but brilliant, nearly round dot. It might not look like much now, because the planet is on the far side of the Sun from us and roughly 120 million miles away. But keep an eye on that little disk! Week by week, as Venus swings around in its faster orbit and comes closer to Earth, it'll grow larger and change shape from gibbous to half-lit to crescent. Like the Moon, Venus displays a full cycle of phases. This is what convinced Galileo that Venus orbits the Sun, not Earth!

Now swing your gaze off to the left, and you'll see bright Jupiter shining higher in the southeast. This giant planet outshines every star or planet in the night except Venus. "Jupiter is the king of the planets and the most interesting for a small telescope," says veteran observer Alan MacRobert, a senior editor at Sky & Telescope. "It's big, it's bright, it has cloud belts, and it has moons that do interesting things."

Even at 50&times or 100×, you should be able to make out two dusky tan bands girding Jupiter's midsection. These equatorial "belts" and the bright "zone" between them are cloud features akin to jet streams high in the Jovian atmosphere. (Jupiter is a gas giant with no solid surface.) At this time last year the southern belt was practically invisible, because some mysterious process in the planet's atmosphere caused it to disappear. Now it's back in full view, appearing wider than the northern belt.

Larger telescopes — those whose main mirror or lens is at least 6 inches across — may bring a few more belts and zones into view, along with an assortment of spots and streaks. The famous Great Red Spot, a huge cyclonic storm larger than Earth, is actually rather pale orange-tan now and can be easily overlooked. Jupiter rotates in just under 10 hours (causing its globe to bulge out visibly at the equator), and the Red Spot is easiest to see when this fast rotation carries it across the middle of Jupiter's disk. You can find the times when this happens using our online app.

While watching Jupiter, your eye will immediately be drawn to a series of moons on either side of the planet, roughly aligned with the belts. These are the four Galilean satellites, named for Galileo, who discovered them from Italy in 1610. "Over time you'll notice their movement as they shuttle around Jupiter," notes MacRobert. "Sometimes not all four are visible: occasionally one of them ducks behind Jupiter or is hidden in its shadow." Their tiny black shadows can sometimes be seen crossing Jupiter's face. How can you tell which one is which? We've got an app for that too!

For more on what to look for on and around Jupiter, check out our observing guide.

There's more to the night sky than planets, of course. Winter evenings often bring crisp, transparent skies with a dazzling canopy of stars. But with so many inviting targets overhead, where should you point first?

The familiar constellation Orion climbs in the southeast after sunset. Look for three bright stars — Orion's Belt — in a nearly vertical line. Just a few degrees to their south (lower right), you'll find the Orion Nebula, a luminous cloud of gas and dust where stars are forming by the hundreds. This nebula is plain in any telescope once you get pointed at it, and so is the tight quartet of stars near its center, called the Trapezium.

Using the three stars in Orion's Belt, draw an imaginary line to the upper right, past the relatively bright star Aldebaran (the reddish eye of Taurus, the Bull) to a little cluster of stars called the Pleiades. It's about the size of your fingertip held at arm's length. "This group is also known as the Seven Sisters," Naeye explains. "In Japanese it's called Subaru — look for them on the car's logo." Through binoculars or a telescope at low magnification, the Pleiades cluster shows dozens of stars. Astronomers have found that the entire cluster has about 500 in all.

To find much else, you'll need a good, detailed star atlas (set of maps), a good deep-sky guidebook, and some practice in how to use the maps to locate things with your telescope. There are certain key tricks to this. See our article Using a Map at the Telescope.

More tips on skywatching and how to get the most out of your telescope can be found in our Observing Section. You can even create a customized all-sky chart for your location, showing the constellations and planets for any time or date.

Sky & Telescope is making the following photographs and illustrations available to the news media. Permission is granted for one-time, nonexclusive use in print and broadcast media, as long as appropriate credits (as noted in each caption) are included. Web publication must include a link to SkyandTelescope.com. 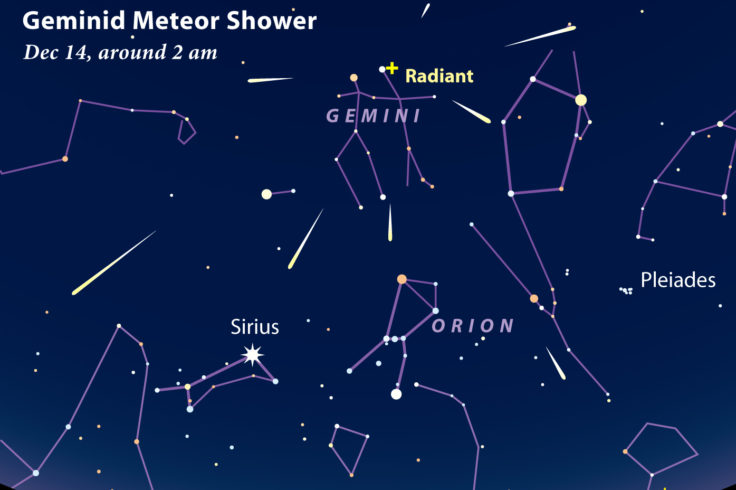 Night Sky Magazine to Be Launched Next Spring