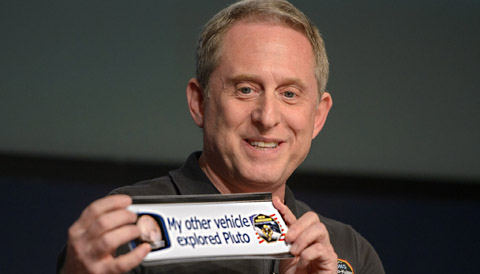 No matter what your level of interest in planetary exploration, you won't want to miss S&T's live webinar on Saturday, January 28th. Hear Alan Stern's personal take on how NASA's New Horizons spacecraft got to Pluto and what we learned once it got there.

The late astronomer Carl Sagan was fond of saying that ours is the only generation that will explore the solar system for the first time. Adopting a generously broad definition for "generation," arguably the most-awaited of these explorations occurred in July 2015, when NASA's New Horizons spacecraft swept past Pluto and its family of moons.

During that flyby, the spacecraft revealed worlds far more complex and amazing than anyone had imagined. In fact, it took three feature articles in Sky & Telescope (the October, November, and December 2016 issues) to lay out all the discoveries made.

No one has a better handle on the 25-year-long effort to reach this distant planetary outpost, and what we learned once arriving there, than Alan Stern. In his three decades of academic research, Stern has focused on studies of our solar system's Kuiper Belt and Oort cloud, comets, outer-planet satellites, the Pluto system, and evidence of solar systems around other stars. He even had a stint as the NASA Associate Administrator in charge of space science.

Clyde Tombaugh might have discovered this far-flung world, but it's Stern who'll be forever remembered as the Guy Who Got Us to Pluto. He and his team overcame many obstacles in getting New Horizons approved, built, launched, and delivered to its primary destination more 3 billion miles away.

So here's you chance to spend a vicarious hour with Stern, during the next Sky & Telescope live webinar on Saturday, January 28th, at 12:00 p.m. (noon) Eastern Standard Time. In his presentation, Stern will tell us all about New Horizons — from its inception to planning its historic flyby to the jaw-dropping discoveries it made. This is one you don't want to miss.