During my brief foray at the Amundsen-Scott South Pole Station in December 2012, I saw Antarctic science up close and personal. My account of the gigantic IceCube Neutrino Observatory, which is buried deep in the frozen continent’s ice, appears in our January 2014 issue.

Building IceCube took hard work. Each string of digital optical modules (DOMs) was lowered into a roughly 2.5-kilometer-deep (1.6-mile-deep) hole drilled in the ice sheet. Winterovers, the people who volunteer to stay at the South Pole during the bitter Antarctic winter (several months of which are totally dark), did much of that work. This time-lapse video shows the team installing the final DOM string. The observatory’s DOMs work together as a “telescope” under the ice, searching for high-energy particles called neutrinos that create brief flashes of light in the ice when they kick off a shower of particles. Photos by Chad Carpenter.

IceCube is not the only big astronomy-related experiment at the South Pole. Next to the IceCube Laboratory is the Martin A. Pomerantz Observatory, which is home to a number of experiments, including the 10-meter South Pole Telescope (SPT). The SPT is the largest instrument for studying the faint microwave radiation left over from the Big Bang, some 13.8 billion years ago. 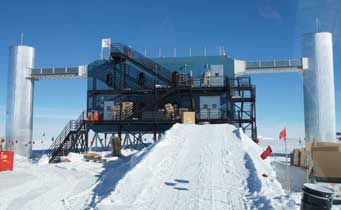 Contributing editor Govert Schilling took this picture of the crouching IceCube Laboratory during his visit to the South Pole.


Govert Schilling
The 300-ton telescope was assembled onsite from parts that all had to fit in the cargo bay of a military Hercules LC-130 freight carrier — the only big airplane able to land at the South Pole. It achieved first light in February 2007 and has been detecting hundreds of distant galaxy clusters on the basis of the “shadows” they create in the CMB: microwave photons are scattered by the hot intracluster gas.

In December 2012, the telescope was outfitted with a new camera, able to detect polarization in the microwave background. Like many other experiments (at the South Pole, in the Chilean Atacama desert, or deployed by long-duration high-altitude balloons), the SPT takes part in a race to find the characteristic polarization signature of gravitational waves produced by the inflationary expansion of the universe in the first fraction of a second of its existence (October issue, page 22).

Other astronomical research in Antarctica includes meteorite hunting, far-infrared and sub-millimeter astronomy with balloon-borne telescopes, and solar physics. There are plans for an optical/infrared telescope called PILOT (Pathfinder for an International Large Optical Telescope), which would be located at Dome C, at 3,233 meters above sea level on the Antarctic Plateau.

How to Make a Simple Backyard Observatory