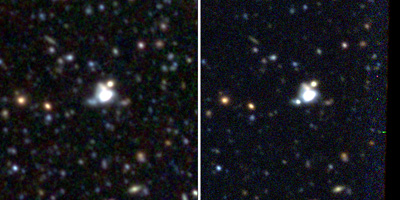 Right: Using the 3.6-meter Canada-France-Hawaii Telescope, the Supernova Legacy Survey took this image of SNLS-03D3bb (bright spot in the center, to the lower left of the bright galaxy in the center), an unusually luminous Type Ia supernova. The image on the left shows the same field prior to the supernova.

For decades, one of the canonical doctrines in astronomy is that a white dwarf cannot exceed 1.44 solar masses — a limit calculated in the early 1930s by the one the greatest astrophysicists of the 20th century, Subramanyan Chandrasekhar. According to theory, if one of these dense stellar remnants accretes enough mass from a binary companion to push it over the edge, thermonuclear reactions deep within its interior blow up the entire star as a Type Ia supernova. Until now, no white dwarf has even been observed above the Chandrasekhar limit, and the energies of Type Ia explosions were all consistent with a white dwarf at the limit.

But in the September 21 Nature, a large international team known as the Supernova Legacy Survey (SNLS) reports observations of a distant Type Ia event known as SNLS-03D3bb that might have come from a "super-Chandrasekhar" progenitor. First, the luminosity was more than twice that of a normal Type Ia, and to account for this anomaly, the team claims, the exploding object must have contained more than 2 solar masses. Second, the ejecta's expansion velocity was one of the slowest ever observed in a Type Ia supernova, which also implies an unusually massive progenitor.

"We know this is a Type Ia supernova because we have a high signal-to-noise spectrum taken near the supernova's peak brightness," says SNLS team member Mark Sullivan (University of Toronto). "This spectrum has all of the characteristic chemical signatures that unambiguously identify it as a Type Ia, in particular silicon-II and sulfur-II, which aren't present in spectra of other supernova types."

The team offers two possibilities for this seemingly "impossible" supernova. First, the white dwarf might have contained around two solar masses, but was spinning so fast the centrifugal forces supported it against collapse. Alternatively, two merging white dwarfs, whose combined mass was well above the Chandrasekhar limit, might have triggered the explosion.

While very few astronomers are questioning the observations and the identification of the supernova as an unusual Type Ia, many are not buying the idea of "super-Chandrasekhar" progenitor. Stan Woosley (University of California, Santa Cruz), one of the world's leading supernova theorists, comments, "Count me as a 'doubting Thomas' on these new results. If true they would indeed be very important, but I don't believe the theoretical interpretation. Paradigm-changing conclusions require extraordinary evidence." Woosley says standard models can account for the event's high luminosity and slow expansion velocity, and that super-Chandrasekhar models for Type Ia supernovae "strain credulity."

University of Maryland theorist Cole Miller points out that if the white dwarf was spinning rapidly prior to its explosion, it could have preferentially beamed more light in the direction of Earth, which would cause astronomers to overestimate the supernova's luminosity. "When faced with something this unusual, one has to consider many possibilities carefully," he says.

Another leading supernova researcher, Robert Kirshner (Harvard-Smithsonian Center for Astrophysics), says the result implies the existence of more types of supernovae than astronomers have seen so far. This type, he notes, must be rare because luminous events such as SNLS-03D3bb are easier to see than dim ones, so perhaps this supernova involved a special process. "It could be that this object has a different internal structure, and that could make a significant difference," he says.

Because Type Ia supernovae generally have similar luminosities, astronomers have used them as "standard candles" to measure the universe's expansion history. Such studies discovered the remarkable fact that the expansion is accelerating. So will the existence of a new, very-high-luminosity class cause problems for these surveys? Adam Riess (Space Telescope Science Institute), a member of the High-z Supernova Search Team, says no. "They collected about 100 Type Ia supernova and this object stuck out like a sore thumb, so it was easy to clip as an outlier without complication. If such objects exist and differ so much from normal Type Ia supernovae, they will not add much complication."