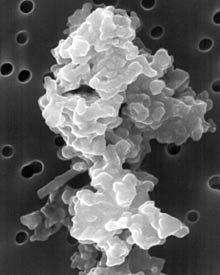 An interplanetary dust grain, probably from a disintegrated comet. Embedded within bits like these are even tinier grains that originated at distant stars and have remained unchanged ever since.

Scientists have discovered a rich source of interstellar dust that they can study right here in labs on Earth. Tiny bits from beyond the solar system, dating from before the solar system was formed, have turned up in meteoric dust sifting down from space.

The vast majority of meteorites that reach Earth are too small to see. Microscopic ones settle to the ground all around us as fine dust, unnoticed by anybody except the scientists who regard them as a bonanza for studying interplanetary material. The dust bits don't get burned by the kind of fiery plunge through the atmosphere that larger meteorites undergo. They are so small that the upper atmosphere stops them in their tracks before air friction has a chance to heat them up.

For more than two decades, NASA has collected cosmic dust samples on oil-coated plates flown by a U2 plane at altitudes of some 65,000 feet (20 kilometers). Now, aided by new diagnostic equipment, scientists have found that some micrometeorites contain another bonanza: abundant particles created at other stars before the solar system was born.

Several types of extrasolar stardust had already been found in larger meteorites, including grains of diamond, graphite, silicon carbide, corundum, and spinel. These grains apparently solidified in outflows from evolved red-giant stars and perhaps the blast waves of supernovae. Their exotic origins are revealed by ratios of isotopes within them that are unlike anything in the solar system.

But interstellar grains in large meteorites are not like the dust astronomers see among the stars. For one thing, the extrasolar grains in meteorites are about 10 times larger (about 1 micron) than interstellar dust. And they are made only of materials that have unusually high melting points and are resistant to chemical action. Apparently they were extensively sorted and modified by processes in the early solar system or in the protoplanetary cloud from which the solar system condensed. Conspicuously missing are the silicates (rocky materials) that make up most interstellar dust.

Micrometeorites collected by airplanes, on the other hand, are turning out to be a whole different story. Scott Messenger and his colleagues at Washington University of St. Louis announced a breakthrough in yesterday's issue of Science Express. They used a new ion microprobe to map oxygen-isotope ratios at very tiny scales within individual grains — and found subgrains incorporated into them that clearly have extrasolar origins. In fact every unaltered, primordial micrometeorite they studied proved to contain many bits of the long-sought presolar silicates.

Some types of micrometeorites contain 50 times more interstellar matter than larger meteorites do, amounting to as much as one percent of their material. Moreover, they include not only silicates but hydrogen and nitrogen compounds that match the interstellar dust in giant molecular clouds — the cores of the densest dark nebulae we see silhouetted against the stars.

These new bits "have isotopic ratios very different from anything in the solar system," said Messenger in a statement. In fact, a single micrometeorite can show a wider range of oxygen-isotope ratios among its parts than the entire Earth does.

Three of the tiny grains the group studied originated in the winds of aging giant stars. Another one apparently came from an especially old star poor in heavy elements. Others have been tied to supernovae, while some particles still have unknown stellar sources. Messenger and his group were able to identify one of the silicate grains as forsterite, a common mineral in the winds of dying stars that give rise to planetary nebulae.

Says Messenger, "These grains are giving us an exquisitely detailed view of how stars evolve and what happens to their debris as it traverses the galaxy."