On December 5th astronomers announced finding two supermassive black holes that may be the most massive ever directly “weighed.” The discovery suggests that a distinct scenario of how giant black holes form may be needed to explain these objects’ existence. As could be expected, the news immediately shot into the headlines of the world’s major media.

But let’s tread carefully. A look at the researchers’ paper (to appear in the December 8th Nature) shows that the masses’ uncertainty ranges are wide enough that there’s a chance neither hole breaks the scale. 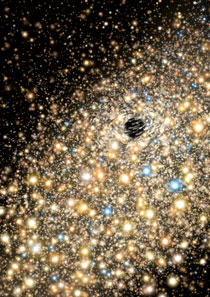 This illustrations shows what stars crowded into the central regions of a giant elliptical galaxy might look like as they swirl around the supermassive black hole.

The two black holes reside in the two giant elliptical galaxies NGC 3842 and NGC 4889, both visible in a 6-inch telescope. Each is a bright central member of a galaxy cluster, in the latter case the well-known Coma Cluster. The astronomers, led by Nicholas McConnell and Chung-Pei Ma (University of California, Berkeley), used the Gemini North and Keck II telescopes in Hawaii as humongous speed guns to determine how fast stars in the galaxies’ innermost regions whirl around the cores. From these speeds, the team calculated the mass of the unseen objects around which the stars zoom. This is the gold standard for how the masses of gigantic black holes are determined.

For NGC 3842’s central monster, the team found a mass between 7 and 13 billion Suns; for NGC 4889 the range is much bigger: 6 to 37 billion solar masses. (The stellar orbits are still kind of fuzzy, data-wise, in NGC 4889.) Those ranges are only what scientists call “one sigma,” meaning that statistically, there’s a 68% chance that the true value lies within the range and a 32% chance that it’s outside the range.

The ranges look quite large when compared to the previous heavyweight champion lurking in M87, about 55 million light-years away in the Virgo Cluster. A report from early 2011 put that beast’s mass between 6.2 and 7 billion Suns. But to the researchers’ credit, these new black holes are more than five times farther away — perhaps at the current technological limit for direct mass measurements using gas or star orbits around a galaxy’s central object, says Michele Cappellari (University of Oxford). In order to isolate stars whose motion is dominated by the gravity of the black hole, and not that of the galaxy at large, the astronomers had to select out and measure the spectra of stars swarming within only about 1,000 light-years of the central black holes. At the galaxies’ 300+ million light-year distances, that’s a stellar racetrack slightly wider than 1 arcsecond.

McConnell notes that 68% confidence is also the most-often quoted error range for black-hole masses used in two physical relations astronomers are trying to understand, and on which the new black holes may (or may not) have some bearing. Observations over the past three decades have shown an unexpected relationship between the mass of a galaxy’s central black hole and some of the host galaxy’s properties, particularly the luminosity and range of stellar velocities in the galaxy’s central bulge of old stars. (These stellar velocities aren’t the same as those McConnell and Ma’s team measured: they’re from a much bigger swath of the galaxy, far out from where the black hole exerts a significant influence.) The brighter a galaxy’s central bulge and the greater the bulge’s internal velocity range, the larger the central black hole. 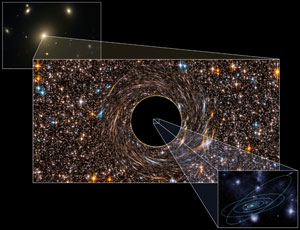 This relationship is remarkably tight. The connection surprised astronomers when they discovered it, because it implies that the black hole and galaxy somehow coevolve — the growth of one controls the growth of the other. Size-wise, that’s an absurd claim: it’s like a single atomic nucleus controlling the construction of a 30-story building. And yet it seems to be true.

The best theory so far involves a symbiosis between the galaxy and black hole, in which the galaxy nurtures the monster by feeding it gas. Bigger galaxy, more gas. But a black hole heats surrounding gas as it feeds, and hot gas can’t collapse to form stars. The interplay of these factors may create the tight relationship.

But outliers to the pattern exist. Really low- or high-mass black holes don’t follow the pattern well or at all. Astronomers have indirect hints, from the luminosities of madly gobbling black holes in the early universe, that gargantuan holes already existed just a mere few hundred million years after the Big Bang and thus should still be around today — at the sizes McConnell and Ma’s team announced. “The ten-ish billion solar mass black holes discovered now are probably the final state of those wunderkinder,” says Marta Volonteri (University of Michigan, Ann Arbor).

If these black holes are larger than they should be, according to the hole-bulge relations, it’s possible that the beasts grow differently in the biggest galaxies than in others. Several astronomers think these largest leviathans grew by merging with other black holes after galaxies collided, instead of just by gas-gorging. “This might explain why [the relations] differ at the low- and high-mass ends,” Volonteri says.

So how big can a black hole grow? That’s the question, Ma says. “Personally I think we’re probably reaching the high end now,” she says. “Maybe a factor of two to go, at best.”

Volonteri agrees. “A mass of ten billion solar masses — that's pretty much the mass of all the stars in the Milky Way together. So, to double the mass of such a monster, you have to feed it an entire galaxy.”

"A mass of ten billion solar masses — that's pretty much the mass of all the stars in the Milky Way together. So, to double the mass of such a monster, you have to feed it an entire galaxy." It is even worse. Approximately half the rest-mass that falls into a BH gets converted into radiant energy on the way down. So for it to gain one galaxy in mass, you have to feed it two.

So, what is the limit? Could our entire universe exist in another's black hole?

So, what is the limit? Could our entire universe exist in another's black hole?

Ever been to Gary, IN?