Think you know everything there is to know about the crazy zoo of alien worlds being discovered beyond our solar system? Think again. Two astronomers have just added another weirdo to the list: an exoplanet darker than powdered charcoal. 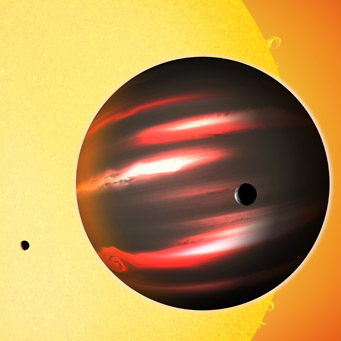 The exoplanet TrES-2b (artist's concept) is darker than the blackest coal, with an albedo (reflectivity) of less than 1%. Astronomers don't know what dusts or vapors in its superheated atmosphere cloak it so effectively. (The two moons are the artist's added touch. There is no evidence, yet, for any satellite of an exoplanet.)

The planet, called TrES-2b, orbits an 11th-magnitude Sun-like star about 700 light-years away in Draco. The planet zooms around its star at a distance of only about 3 million miles; as a result, surface temperatures on the planet exceed 1,800°F (1,000°C).

David Kipping (Harvard-Smithsonian Center for Astrophysics) and David Spiegel (Princeton University) used precision photometry from the Kepler telescope to study how the planet's reflected light adds to the system's total light the planet orbits around to the far side of its star, showing us its full lit face. They did measure the planet's reflected light, but ther's very little of it. The planet reflects less than 1% of the light hitting it, making it blacker than any ordinary substance on Earth. Their research paper will appear in the Monthly Notices of the Royal Astronomical Society.

Before this, astronomers had already found signs that some (but not all) "hot Jupiters" reflect only a little light, as might be expected from the dark dusts that ought to condense high in their broiling atmospheres. But no one knows why Tres-2b is so extraordinarily dark. "We can calculate what amount of optical absorption is needed in the atmosphere in order to explain the low reflectivity," says Spiegel, "but we can't, as of now, identify the molecular species that's responsible for this absorption."

Whatever the guilty substance, it must be very efficient: TrES-2b is less than one-fifth as reflective as flat black acrylic paint. "It's truly an alien world," says Kipping.

The real importance of this exotic exoplanet may be in how it has stretched the limits of what a planet can be. "This discovery is less about something completely new," says planetary scientist Sara Seager (MIT), "and more about adding to the growing reservoir of evidence that a class of hot Jupiters are indeed very dark."