Turn your telescope to Jupiter and you'll easily pick out its "stars", the dots of light from the four big Galilean moons that orbit the king of planets. Which one is which? Our interactive tool shows the positions of Io, Europa, Ganymede, and Callisto for any date and time between January 1900 and December 2100.

The tool is customizable, so that you can change the view according to the type of telescope you're using. You'll also find extra information on whether and when a moon might hide behind Jupiter or cast its shadow on the planet's cloudtops.

Read on for advice on observing Jupiter's moons and a detailed explanation of the interactive observing tool.

Try to imagine what must have gone through Galileo Galilei's mind one January evening in 1610 when he first realized that the four points of light he saw through his new telescope were, in fact, worlds circling Jupiter. The thrill of discovery would have been magnified by the simultaneous realization that an unshakable truth — that all worlds revolved around the Earth — had just collapsed. Although viewing these same moons might not shake up your own worldview, you can at least relive some of Galileo’s excitement by discovering them for yourself with nothing more than binoculars or a small telescope. 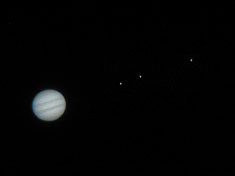 Surprisingly, ordinary binoculars are optically superior to anything Galileo viewed through. Although binoculars typically magnify far less than Galileo’s telescopes, their sharp views will more than compensate for the lower power. Most binoculars will allow you to see the four largest Jovian moons — Io, Europa, Ganymede, and Callisto (in order of increasing average distance from the planet). Binoculars that magnify 10x will have an advantage over those that magnify 7x.

Either way, to get more than a fleeting glimpse you'll need to mount them on a tripod or some other support. Some binoculars have provisions for doing this; they're equipped with a standard ¼-20 threaded mounting hole located on the front hinge to facilitate the use of a tripod adapter. If yours lack the mounting hole, you can either securely tie the binoculars directly to the tripod head or simply steady yourself by leaning against a post or rail. Of course, if you’re using a telescope with a decent tripod, you’re already set.

Half the difficulty in seeing the Galilean moons for the first time is knowing what to look for. Although all four are major solar-system bodies (Europa being the only one that's smaller than our Moon), they are distant enough that at low magnification they look just like stars. 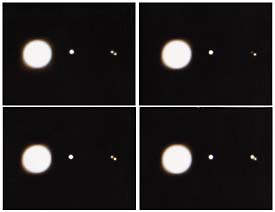 Akira Fujii of Koriyama City, Japan, recorded Jupiter and its moons (from left to right) Ganymede, Europa being eclipsed, and Callisto.

Knowing in advance where the moons will be makes finding and identifying them much easier, but keep in mind that each one becomes temporarily invisible when passing in front of or behind Jupiter, or when passing through its shadow. Don’t be surprised if you see only two or three moons most of the time. The easiest to catch are Ganymede and Callisto. They orbit farthest from their host and spend days at a time beyond Jupiter’s glare. By contrast, Io and Europa never venture far from the planet's disk.

Tell the moons apart using Sky & Telescope's interactive Jupiter's Moons tool . For any date and time between January 1900 and December 2100, this interactive tool shows the positions of Io, Europa, Ganymede, and Callisto. Moreover, the utility matches the view in your telescope's optical system, whether it shows the sky with north up, south up, or mirror reversed. And it tells you when the moons (and/or their shadows) are crossing the planet's disk, hidden behind it, or eclipsed by the planet's shadow.

Once you have Jupiter and its moons in view, try to make a quick sketch of their relative positions. Do this on several consecutive evenings. By placing each drawing beneath the previous night’s, your series of sketches will resemble a page out of Galileo’s notebook. With these data in hand, see if you can estimate the orbital period of each satellite. These are the same data that Galileo had to work with in 1610 — data that provided the first observational evidence supporting Copernicus’s assertion that the Earth is not the only center of motion in the solar system.

Instructions: How to the Use Jupiter's Moons

The display has several parts. At top is a diagram showing the positions of Io (I), Europa (E), Ganymede (G), and Callisto (C) with respect to Jupiter. Below the graphic are three buttons you can use to change the orientation of the diagram to match the view in your telescope. "Direct view" puts celestial north up and celestial east to the left; the routine opens in this orientation, which is the one used in most star atlases. "Inverted view" puts south up and west to the left, matching the view seen in a Newtonian reflector in the Northern Hemisphere. "Mirror reversed" puts north up and west to the left, matching the view in most catadioptric (mirror-lens) and refractor telescopes used with a star diagonal in the Northern Hemisphere.

The tool is initialized to the current time, based on your computer's clock, but you can change the date and recalculate to obtain information for other dates. You can also use the adjacent buttons to step backward or forward in increments of 1 day, 1 hour, or 10 minutes.

Our Jupiter's Moons tool displays Universal Time (UT, the same as Greenwich Mean Time). To the right of the date and time boxes, there's a box that shows what we think is the offset between UT and your local time.

Basic Data. The next fields provide some basic data of interest to visual observers, starting with apparent brightness, expressed in visual magnitudes. For reference, the brightest star in the night sky, Sirius, shines at magnitude –1.4. A difference of 1 magnitude corresponds to a brightness ratio of about 2½, so when Jupiter shines at its brightest, around magnitude –2.4, it's about 2½ times as bright as Sirius.

The next field shows the angular diameter of Jupiter's disk in arcseconds, measured along the equator (the planet is noticeably "squashed" at the poles). The Moon spans about ½°, or 1,800 arcsec, while Jupiter's angular size is typically between 30 and 45 arcseconds — that's why you need a telescope to see any detail in the planet's cloudtops.

The next entry is Jupiter's distance from Earth, measured in terms of astronomical units (a.u.), the average Earth-Sun distance.

The last item in the list of basic data is the System II longitude of Jupiter's central meridian, the imaginary line down the middle of the planet's disk from pole to pole. This is useful as an indicator of whether you can see the Great Red Spot, which lies at a System II longitude of around 100°. For more information about observing this famous Jovian feature, see the companion article, "Transit Times of Jupiter's Great Red Spot."

Satellite Phenomena. The bottom section of the display is a table of what the Jovian moons are up to, including transits of the moons (and/or their shadows) across the planet's disk, occultations of the moons behind the planet, and eclipses of the moons by the planet's shadow — all of which can also be seen at the given date and time in the diagram at the top of the display. The calculated times of satellite events should be good to within a few minutes.

This is a great App. Every time I'm giving a lecture on Navigation I can show the audience what the Moons of Jupiter look like while I'm talking, and ilustrate how they could find their Longitude. I've been doing that for years.

Big thanks to everybody who keeps this site running!

This is great. I like knowing which moons I'm looking at.