The Orion Nebula Cluster might be home to a black hole more than 100 times the mass of the Sun, according to a recent simulation. At 1,300 light-years away, that would make it the closest known black hole to Earth.

Most of space is empty. Even when galaxies collide, individual stars are far more likely to exchange passing glances than meet head-on. 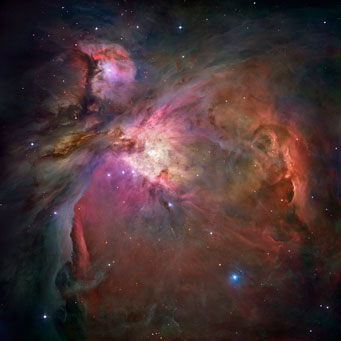 The Orion Nebula star cluster is tucked in the center of the photogenic Orion Nebula. The cluster core is dominated by the four Trapezium stars.

But space is a little less empty in the Orion Nebula Cluster, one of the many star clusters hanging from the mythic warrior’s belt. In the cluster’s early years, stars might have been packed so tightly that physical run-ins would be unavoidable. According to a new simulation conducted by Ladislav Šubr (Charles University, Czech Republic) and his colleagues in the September 20th Astrophysical Journal, these multiple mergers could have created a massive black hole that dominates the core of Orion Nebula Cluster.

The odds that a star will run directly into another star increase with the star’s mass. When two normal stars do collide, the result is a single, more massive star. Because this larger star is more likely to have yet another star run into it (because it’s bigger than it was before), collisions can lead to a runaway effect, as this star continues to grow via stellar cannibalism.

The computer simulation performed by Šubr and his colleagues shows that this runaway string of collisions could grow a central black hole up to 150 times more massive than the Sun.

The idea of runaway black hole growth in stellar clusters isn’t new, but previous studies have focused on high-mass star clusters, ideal breeding grounds for black holes thousands of times the mass of the Sun. The new simulation is the first to show that even low-mass star clusters could grow their own, more modest black holes, says Jan Pflamm-Altenburg (Bonn Astronomy Institute), who was not involved in this study.

The team’s simulation is simple in principle — the computer code calculates primarily the gravitational interactions between thousands of stars. If two stars get too close together, the code merges them into one. Stars can also escape the cluster if they gain enough speed through interactions with other stars. Stellar mergers happen often in the simulated cluster’s early years, when the newborn stars huddle closer together. Multiple runs of the simulation make clear that, assuming the Orion Nebula Cluster was more compact in its past, a black hole with a mass of at least 100 Suns is inevitable. 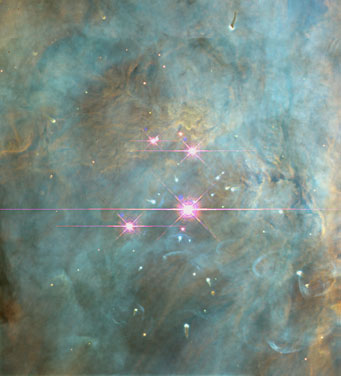 A 150-solar-mass black hole could explain the high speeds of the Trapezium stars, the four hottest and most massive stars in the Orion Nebula Cluster.

If it exists, that black hole probably isn’t growing much today. Astronomers think that after only a few hundred thousand years, the Orion cluster’s hottest, most massive stars began emitting intense radiation that drove away the star-forming gas enshrouding the young cluster. The cluster swells in size as the gas escapes because there is less mass holding the cluster together, and some weakly bound stars escape. The simulation mimics this expulsion, producing a cluster that loses about two-thirds of its mass and expands to five times its initial size. In the expanded cluster stars collide less frequently, and the runaway growth of the black hole slows down.

In the simulation, many of the heaviest stars either merge or escape, which might explain why only 10 OB stars are currently observed in the cluster, much fewer than the 40 OB stars expected.

Even if a black hole is inevitable in the Orion cluster, the trick will be to observe it. In general, black holes become visible when they feed on gas from their surroundings, because the gas heats up and emits light. But there’s not enough gas in the Orion Nebula Cluster to feed the black hole in sufficient quantities. And even though the simulation indicates that the black hole probably forms a binary system with a star, the two will likely be too far apart for the black hole to feed off its companion.

A black hole could also be observed indirectly, by measuring its effect on the stars whirling in the cluster core. Šubr and his colleagues suggest that a 150-solar-mass black hole could explain the high speeds of the Trapezium stars, which lie at the Orion Nebula’s heart. But thorough observations of the cluster’s innermost 0.2 light-year are still needed to reveal whether the black hole exists, the authors conclude.

The Orion Nebula Cluster is one of the closest young star clusters, about 1300 light-years away, making it easier to study than the massive clusters, which lie at greater distances. “If a black hole really exists in the ONC, then it might be the closest black hole known to Earth,” Pflamm-Altenburg adds.

Again an intriguing subject well covered, thank you Dr Young! One question that immediately arises is HOW these mergers between stars proceed, especially if there's a collision. I think we can rule out the peaceful cannibalism scenario, yes? Every other instance I can imagine, would partially denude at least one if not both stellar cores and release humongous amounts of energy that would normally have taken hundreds of thousands of years to go from core to surface. In addition to that, a very large percentage of the outer envelopes, several if not tens of solar masses ought to be ejected. To my mind this suggests that every massive, non-cannabalistic star merger enters the energetic release-realm of supernovae. Where is the evidence for this? In the Orion Nebula? Elsewhere? If this theory is correct, the remains of these violent mergers must be detectable and would give a very good idea of where the epicenter and consequently the location of a black hole.

Henrik raises good questions about this fascinating report. In addition to the observational evidence he asks about, I add that if a 100 or so solar mass black hole has formed in the heart of the Orion Nebula Cluster shouldn’t there be at least some visible signs of black hole jets? The orientation of the jets would change with the random nature of these collisions, but still shouldn’t there be some evidence of all this extremely violent activity, or is the dust still too thick to see through? If the jets from an active galactic core SMBH can punch clear outside a galactic central bulge then one would think some form of scaled down version of this might be discernable in or around the ONC. Clearly much more investigation is warranted upon this area of relatively nearby space.

Have other astrophysicists commented on this simulation and the conclusions of Subr et al.? To this layperson the existence of a huge black hole in the Orion nebula cluster seems much more like an interesting hypothesis than a reliable fact. In the absence of jets from an actively accreting black hole, how hard would it be to study the movements of the stars in the cluster to either prove or disprove the presence of a black hole?

“If two stars get too close together, the code merges them into one. Stars can also escape the cluster if they gain enough speed through interactions with other stars…The cluster swells in size as the gas escapes because there is less mass holding the cluster together, and some weakly bound stars escape.” Duality. The cluster is not expanding or contracting, it is doing both at the same time; it just depends on which part of the system you look at. Dr. Young: do you understand concept of duality in this situation? That parts of the cluster are contracting, other parts expanding, and there is cause/effect going on?

There are some great questions here, and hopefully the following will answer a few of the outstanding questions: If there is a black hole in the Orion Nebula Cluster, it's unlikely that it's accreting much gas. So it won't emit many X-rays from its accretion disk, and it won't form jets strong enough for us to see. That's why the main test for its existence is the motion of stars in the very inner core of the cluster, which requires a higher degree of resolution than what's been done in the past.

Thanks for the clarification, Monica. I hope there will be a study of the movements of the stars in this cluster to rule in or out the existence of this hypothesized black hole. If there is a black hole in the middle of the Orion nebula, that will be one more cool fact to share with winter star party visitors!

Peter Wilson, I’ve read your thesis and even recommended it to others. I recognized the application of your theory in this case and in others too, such as the way globular star clusters outer reaches expand even as the cores contract. (See the latest S&T story on the 2 black holes discovered in the core of M22.) Since you once wrote “Rep needed” I can be contacted at mayfield.bruce@ymail.com

Ok, so let’s assume that this ONC black hole idea is true and that furthermore it provides an example of the way open star cluster forming dust/gas clouds of this size generally evolve in this galaxy and others. Just as stars are spoken of as having habitability zones, galaxies also have zones that are more conducive to having earthlike planets that can remain unaffected by some astronomical terminal disaster for immense periods of time. These areas have the right range of metals ejected from earlier supernova and such, but too many supernova, and there goes the neighborhood, so to speak. That being said, in terms of long term habitability for the earth, which would you prefer to have 1300 light-years away, an open cluster dispersing 40 O & B stars, all of whom are destined to pop at some point, or 10 OB stars and a 150 solar mass black hole 1300 light years away? We could call this the Goldilocks Principle; if choosing between ideas about how the universe works, the side more favorable to life as we know it may be more likely to be found to be true. Therefore I like the implications of the simulations Subr et al have ran, and I think that they might be on to something, now that Dr. Young has explained why the evidence for the black hole is so hard to find.