Just about every amateur astronomer has wondered what it'd be like to have an even-bigger telescope — we call it "aperture envy" — and professional astronomers are no different. 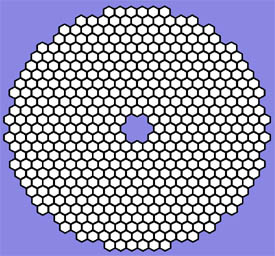 Each of the 492 mirror segments that comprise the Thirty Meter Telescope's f/1 primary mirror will be constantly adjusted for optimum alignment. An 11½-by-8-foot pickoff mirror protrudes through the central opening and directs light sideways to one of several planned instruments.

So the pros were understandably thrilled last week to learn that a telescope with an aperture of 30 meters (nearly 100 feet) is moving from wishful thinking to not-too-distant reality. That's because the Gordon and Betty Moore Foundation has pledged $200 million over the next nine years to aid construction of a giant eye called the Thirty Meter Telescope.

Building on experience gained with previous segmented-mirror designs, the TMT will employ 492 hexagonal mirrors, each about 1.44 meters (57 inches) across its corners, arrayed together into a 30-meter-wide f/1 primary mirror. Six artificial guide stars, created by lasers illuminating spots in the upper atmosphere, will allow the telescope to continuously cancel out the image-degrading effects of atmospheric turbulence.

It's hard to imagine a telescope this big. This 140-ton giant will gather eight times more light than any other telescope — heck, even its secondary mirror is 10 feet across! 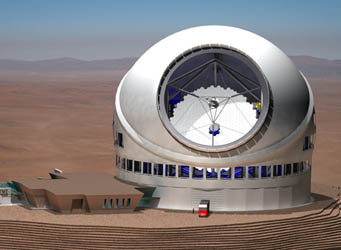 When completed in 2016, the mammoth Thirty Meter Telescope will have eight times the light-gathering area of any other optical telescope.

A site for the TMT hasn't been chosen; five locations in Chile, Hawaii, and Mexico are being studied, though Cerro Armazones in northern Chile is the one being used for planning purposes. Construction should begin in 2009, with "first light" expected in 2016.

If you're an aspiring astrophysicist wondering where to go to college, note that TMT is a collaboration involving Caltech, the University of California, AURA (a consortium of universities), and ACURA (AURA's Canadian counterpart). Caltech and the UC system, which previously joined forces to build the Keck telescopes, have each committed $50 million toward the TMT, and their astronomers will get the lion's share of observing time.

The TMT project already has an informative website, and if you're a real gearhead eager to see the technical details, I recommend perusing the recently completed 229-page "TMT Construction Proposal".

And, just in case you're wondering, the TMT won't have an eyepiece.

"When completed in 2016, the mammoth Thirty Meter Telescope will have eight times the light-gathering area of any other optical telescope."

why does sky and telescoepe always need to hype new telescopes with inaccurate or misleading information.

TMT will only have 6 times the collecting area of the existing LBT in Arizona.

TMT will only have an 80 percent nominal collecting advantage over the GMT which will probably be completed before TMT (mirror in process, site chosen) -- assuming either are actually ever built.

Furthermore, the unique seven segment, off-zxis design of GMT may give it performance significantly better the nominal differences in size suggest.

Whenever I'm reading about YAGBMS (Yet Another Ground-Based Monster Scope) I'm always asking what is the aim of having another one giant mirror with limitations like fixed axis, narrowed elevation, fixed primary mirror with "floating" secondary reflection glass. TMT isn't revolutionary. Make intereferometry not single domes!

In the other hand there is no serious effor for space eyes I guess. Poor Hubble has been nominated to fiery death quite soon, JWST has been cut in size and probably will fly in 201?, TPF sounds like the distant echo of the brave ideas.

I can't wait to see the pics from this one.

The More, the Merrier!
Think about the numbers of telescopes in use on our planet. This is one more big telescope, and the more telescopes we can add up, the better our understanding of our the universe itself. As an example: Think about the VLA - the Very Large Array of Radio Telescopes in New Mexico. Those telescopes all working together are significantly more sensitive than any single one of them. Now apply that theory to the individual groups of astronomers and scientists that gather data from the telescopes out there that contribute to the fields in which we apply the date. As those individual groups share their scientific findings, the ability to focus our understanding of science to a higher degree of sensitivity becomes increasingly measurable. Although it will have mass appeal to all of the visual observers’ out there, its scientific value doesn’t only fall into the visual spectrum. althouth it is but one telescope, it will be a welcome addition to the numbers.

The Best Meteor Showers in 2020