As a youth, Bob Friedman spent nine summers at a boy’s summer camp near Honesdale, Pennsylvania. Called Camp Skycrest, this place offered a variety of science programs known as “shops.” When I worked there during the summer of 1967, I asked to introduce astronomy to the camp program. Frederick Brown, the camp’s director, didn’t think that the program would be very popular, but it was. During that summer almost half of all the campers had some contact with the night sky, a record that would be good even for 2009 and the International Year of Astronomy (IYA). 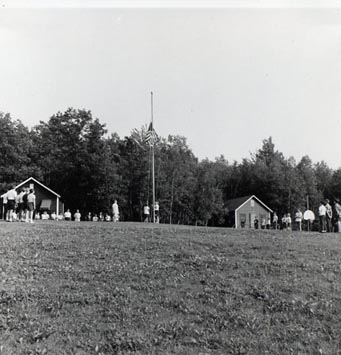 During the time of Augustâ€™s Perseid meteor shower in 1967, flag-lowering ceremonies at Camp Skycrest in Honesdale, Pennsylvania, were also a time to check sky conditions. For too many nights it was cloudy, but those who were there still remember the one night that it was clear!

The highlight of the astronomy program was the Perseid meteor watch, which I hoped to conduct on the evening of Saturday, August 12th. Although the day’s weather looked promising, with only some cumulus clouds to block the blue sky, heavy clouds moved in around sunset, and we had to call off the event. The next evening was no better, nor was the night after that.

By Monday, August 14th, I considered foregoing what would have been my day off in the hope that the sky would finally be clear. But Joe Howard, a friend from California, persuaded me otherwise. “A day off at Skycrest,” he insisted, “is a very holy thing.” Considering the 18-hour days I had been working, it was hard to disagree with him. The sky must have felt the same way, because it wasn’t clear that night either.

Wednesday, August 15th dawned partly cloudy. The Moon was passing first quarter and Perseid numbers were plummeting, but by late afternoon it seemed that we would finally have at least some clear sky at night. At sunset I gathered the team of 12 youthful observers. The camp director gave us a lecture about keeping the noise down, and he arranged for the dining room to be open all night with snacks available.

Despite the Moon, our first meteor came almost as soon as we began observing, and the numbers remained fairly steady throughout the night. The Moon’s departure around 1 a.m. brought with it some intermittent fog, and we eventually had to close down by about 2:30. On that night the group logged 166 meteors, most of them late-shower Perseids.

So what? What does a long-ago meteor watch to do with the current IYA? Plenty, actually. I recently wrote to Bob Friedman, who currently manages a Yahoo group dedicated to those who attended Camp Skycrest when it was run as a science camp. “Remember it?” he wrote about the meteor watch. “That was one of the most memorable nights I had in my nine years at Skycrest!”

I know that Bob wasn’t the only one who was inspired that night. Alex Scheeline, currently a professor of chemistry at the University of Illinois at Urbana/Champagne, still talks about that seminal night. I am sure the others who were there, and who might read these words, remember it too. It’s more proof that astronomy can touch people’s lives in very memorable ways.

Despite the children’s interest in astronomy, the summer of 1967 never had enough clear weather at Camp Skycrest for a good series of observations. May the summer of 2009 be a better one for all of us who enjoy starry nights.

Dr.David, Your story does give a sense of nostalgia...like it reminded me of my childhood.. not so long ago.. summer of 97.. 30yrs after your experience. Hale-Bopp was reigning the summer skies in India... and the spark was lit... and it caught fire..ignited a passion for astronomy..for discovery.. i could go on and on.. I like rading Your posts..
Clear skies;
Sathya