During the early morning hours of May 25th, I set up Gemini, my new 10-inch JMI binocular telescope, for a predawn comet sweep. Starting my hunt a little earlier than usual, I headed out among the stars in Pegasus. I was searching about a degree and a half from NGC 7331, the bright galaxy near the famous galaxy cluster Stephan’s Quintet, when I chanced upon a faint fuzzy spot of perhaps 11th magnitude. Since I knew the field well, I assumed right away that it was a comet.

It didn’t take me long to confirm it was indeed a comet, but one that was already well known. Using the Minor Planet Center’s website, I checked for known asteroids and comets in the area, and found that Eric Christensen discovered this comet in 2006. It has been slowly brightening ever since, but it should fade slowly over the next few months as it heads south. 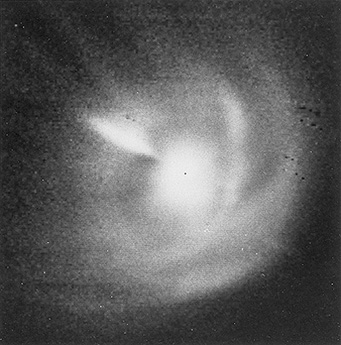 This remarkable view of jets emanating from the nuclear region of Comet Halley in January 1986 was obtained by Steve Larson and the author with the 61-inch telescope on Arizonaâ€™s Mt. Bigelow.

Although Eric is now involved with the Gemini South telescope in Chile, he remembers fondly his time with the Catalina Sky Survey in Arizona. Currently the most successful of the major surveys looking for asteroids that pass close to Earth (NEOs — near-Earth objects — as they’re known to astronomers), finding some 70% of those discovered in the past three years, the program is run by Ed Beshore and Steve Larson. The program includes a southern survey conducted by Rob McNaught and Gordon Gerradd. That survey resulted in the discovery of what became the Great Comet of 2007.

I know Steve Larson very well. In the summer of 1985 he hired me to be part of his “Near-Nucleus Studies Net” for the International Halley Watch, a multi-year effort designed to coordinate and archive observations from around the world. The job was fun and rewarding. My favorite part was the observing we did, both with the 61-inch telescope atop Mt. Bigelow, and with the 20-inch on Tumamoc Hill just west of Tucson. 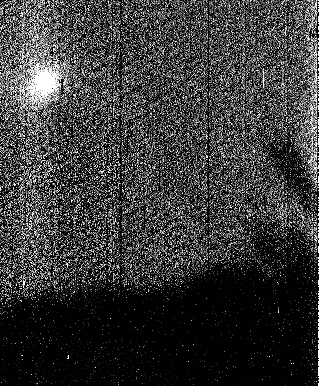 Youâ€™ll need to read the accompanying story to find out why this view of Comet Halley on January 27, 1986, is one of the authorâ€™s favorites.

We amassed a huge amount of data from those years. The two pictures here were taken during January 1986. The first shows the comet in outburst on January 6th, with several jets emanating from its nucleus, including a remarkable tailward jet feature. Steve and I obtained that image with the 61-inch telescope. While visually less impressive, the second image is my favorite. On the evening of January 27th I struggled to find the comet in twilight less than two weeks before its February 9th perihelion passage near the Sun. I finally spotted it and grabbed a test image seconds before the comet set behind a distant hill. The image shows the comet at left, the hill in the center, and a cactus branch on the right.

Years later, it appears that Eric had a similar experience working with Steve Larson. “Working for Catalina was a fantastic experience,” he writes; “it was very satisfying to do interesting work with good people. I was hired as an observer in 2003, when Catalina was in the final stages of some major equipment and software upgrades. I was involved in software development, maintaining and improving the acquisition and reduction pipelines and user-interface tools. There was also a fair amount of hands-on work, from washing optics and collimating the telescopes to installing exhaust fans and air conditioning in the dome. Working on a project like Catalina with limited staff and budget was challenging but gratifying, and there was rarely a dull moment. There was always a new problem to solve, a new improvement to implement, a new way to squeeze a few more discoveries out of our existing system.”

This year Comet Christensen reaches perihelion in early July, when it could be 8th magnitude. The comet is a tribute to a lot of hard and conscientious work. Eric is enjoying the big telescope in Chile, but he misses “the thrill of the hunt that was a regular part of the experience at Catalina. The feeling of being the first to lay eyes on a new comet or near-Earth asteroid was absolutely incomparable. I spent more than a few sleepless days after a telescope shift, so high on adrenaline I couldn’t wait for night to come so I could observe again.”

Through his years of observing, Eric has captured the magic of what discovery is all about 19 times. Even now, as twilight fades and the southern sky appears in all its grandeur, he has that “Peltierian” wonder: Has something changed in the sky since last night? For those of us who search the heavens, those words express why we are so passionate about it.

I've been observing C/2006 W3 (Christensen) since the middle of May and have had some very fine views through a variety of telescopes ranging from 12.5 to 20 inches in aperture. The coma was bright and irregularly shaped and a fan-shaped tail was evident.

I've been observing C/2006 W3 (Christensen) since the middle of May and have had some very fine views through a variety of telescopes ranging from 12.5 to 20 inches in aperture. The coma was bright and irregularly shaped and a fan-shaped tail was evident.