To mark International Dark Sky Week (April 15–21, 2018), here are some of the nation's finest stargazing spots, where artificial light is all but absent.

There’s a simple rule for anyone searching for a dark sky; go somewhere others are not. The spread of LED lighting in North America over the past decade or so has worsened light pollution and skyglow in many previously dark locations. However, the vastness of the U.S. means there are still plenty of empty spaces where deep-sky objects and the Milky Way can still be seen easily with the naked eye. In celebration of International Dark Sky Week (April 15-21, 2018), let's look at a few of them.

A good place to start is the International Dark-Sky Association (IDA), which certifies mainly national parks, state parks, and national monuments as having night sky-friendly lighting. The IDA differentiates between Dark Sky Reserves and Dark Sky Parks: Dark Sky Reserves are areas where light pollution is being actively curtailed despite the presence of towns and settlements. All very important, but for the finest astronomical experiences, it's Dark Sky Parks you should head to — only in these mostly remote places will you find nighttime conditions prevalent before the introduction of electric lighting in the late 19th century.

Facilities for astronomy vary, with some Dark Sky Parks providing hard standings for telescopes in some locations. But mostly you’ll be on your own, save for some ranger programs to introduce the night sky to the public, or perhaps monthly or annual star parties. Our selection is by no means definitive (and a light pollution map is arguably just as useful), but here are some highlights from the IDA’s rapidly expanding catalog of International Dark Sky Parks, which all make stunning, starry locations for an astronomy-themed break. Clear skies allowing, of course.

Although it’s only a provisional Dark Sky Park, the fact that one of the world’s most popular tourist destinations is going dark is impressive. The formerly brightly lit Grand Canyon Village is the focus of efforts to install dark sky-friendly lighting, but it’s the canyon floor itself that has the darkest skies. If you want to set-up telescopes, drive to the more remote Desert View or Lipan Point. There will be a star party here from June 9–16, 2018. Find out more information on camping overnight here.

The east coast may not be known for open spaces and dark skies, but Cherry Springs State Park is one of the most loved Dark Sky Parks in the U.S. The reason is its dedicated astronomy observation field, which boasts unobstructed views all around and has campsites nearby. Privately organized stargazing tours and astrophotography workshops are available.

Although the park itself is tiny, its position above a gooseneck in the Colorado River gives it dramatic views to the south. Its iconic Kayenta Campground is a great place to stay for a meteor shower. The visitor's center is a stroll away and Dead Horse Point itself just a short drive. Ranger-led star parties and full Moon hikes are common, and the incredible Arches National Park is a few miles away.

The Beehive State should be re-named the Dark Sky State, with no less than nine Dark Sky Parks in Utah. The newest is the remote Steinaker State Park in northeast Utah between Dinosaur National Monument and the Flaming Gorge National Recreation Area. It’s at an elevation of 5,500ft, and the Uinta Mountains help block artificial light from the town of Vernal to the south.

Practically next door to Dead Horse Point State Park is the dramatic Mesa Arch, a landmark of the Canyonlands National Park and a favorite of astrophotographers. Rangers often set up telescopes for the public at Grand View Point in the Island in the Sky area, as well as at The Needles Visitor Center (though that's accessed from the south, a few hours' drive away). Find details on stargazing events here.

Another site designated in early 2018, the southern California Desert already plays host to Borrego Springs International Dark Sky Community. Given the proximity to a town committed to preserving the night sky, light pollution at the 650,000 acres of Anza-Borrego Desert State Park is minimal. Stargazing events are beginning to be planned here.

This 550-acre Dark Sky Park on the shores of Lake Michigan is mostly woodland, but its two miles of undeveloped beach are a mecca for stargazers. You can't camp here, but you can stay all night. There are numerous public viewing nights at Headlands Observatory for just $3 per person and many night sky events. You might even see the Northern Lights between September and April.

Although the designation last year of the Central Idaho Dark Sky Reserve got a lot of media attention, the Gem State’s real jewel for amateur astronomy is the also newly-certified Craters Of The Moon National Monument. This sparsely populated area boasts dramatic volcanic formations and lava flows. Idaho Falls Astronomical Society stages a star party each spring and fall, setting up telescopes in the Caves Area parking lot.

About 100 miles south of light-polluted Orlando is Kissimmee Prairie Preserve, which has purpose-built astronomy pads dedicated to observing the night sky. You can book a pad there and get detailed stargazing advice on no less than nine separate observing locations.

There are only three precious International Dark Sky Sanctuaries in the world, which makes Cosmic Campground a truly special place. Visit this super-remote, 3.5-acre site in the Gila National Forest of western New Mexico and you’ll find exceptional night skies (the nearest significant source of electric light is more than 40 miles away) and observation pads for setting-up telescopes.

Thanks very much, Mr. Carter. You've got me dreaming about truly dark skies.

I would like to add a couple of tangential comments -- We should all be able to enjoy the sky from our own backyards, rooftops, and local parks. Let's not abandon the hope of improving the quality of the sky where we live. And light pollution is not only an aesthetic problem for astronomy buffs. Excessive nighttime lighting is harmful to wildlife and human health, as well as a waste of energy and a contributor to global warming.

In addition to planning special trips to visit Dark Sky Parks and Reserves, we should all join the International Dark Sky Association. IDA provides education about what individuals can do to improve our own lighting*, and advocates for local, regional, national, and international policies to restore a natural dark sky. Unlike other forms of pollution which can be very persistent, once you turn off a poorly designed lighting fixture, it is no longer polluting!

In Norhwest Florida, the Escambia Amateur Astronomers help promote dark skies at both the state and federal level. We host Dark Sky gazes monthly on Saturdays closest to the third quarter moon throughout the year at Big Lagoon State Park west of Pensacola. In addition to telescopic views of deep sky objects, we also host beginners astrophoto sessions, so if you can come, bring along your scope, binocs, camera, and tripod. Our observing chairman is Dewey Barker, 850-450-7767. Gazes for the test of the year are on May 5, June 9, July 7, August 4, September 1, and September 29.

For 42 years, we have hosted Sky Interpretation sessions for campers and guests at Battery Worth on Fort Pickens National Seashore as volunteers in service to the National Park Service. These are on the Fridays closest to the new moon from April through October, in cooperation with their astronomy rangers. We host a video tour of that evening's sky (including satellite passes and Iridium flares!) at the amphitheater at 7:30 PM, then head to telescopes and large binocs set up in the parking lot afterwards. For more information on the Sky Interpretation, contact Dr. Wayne Wooten (winner of the Astronomical League Award for 2010) at 850-291-9334, Gazes for the rest of this year are scheduled for May 11, June 15, July 13, August 10, September 7, and October 5. We have been teaching members of the Emerald Coast Camera Club how to get great Milky Way photos under the dark Gulf skies; to see a gallery of their efforts, access the gallery on Facebook at:
https://www.facebook.com/media/set/?set=oa.10155612308864302&type=3

I find it vexing why death valley was not included in this list. It is only the best and darkest stargazing park in all of the mainland U.S. by the way.

Bruneau Sand Dunes State Park is reasonably close to Crater of the Moon. Bruneau has an observatory building with an Obsession 25 that is open to the public through the summer on Weekends.

Especially given the personal experiences of a certain individual high on the masthead of S&T, whose initials are P.T., it's surprising that Big Bend National Park in west Texas, a designated Dark Sky Park and home to perhaps the darkest night sky measured by the Park Service, was not on the list. It may be more isolated and time-consuming to get to than any of the locations on the list, but not by all that much, and I can attest to the fact that it is ethereally, phenomenally dark there at night. As for the long drive there from any large town, one benefit of that, aside from the obvious, is that it's an eye-opening education in itself for anyone who hasn't yet encountered the vast stretches of non-desert land empty of towns, buildings, or any other sign of civilization besides fences, that still exist somewhere in the U.S. It's 1300 square miles in which, in low season (summer), there may be no more than a few dozen people overnight.

You missed Great Basin National Park. Not only are the skies dark, but you can drive up Wheeler Peak to over 9500 feet and see more stars than you've ever seen

Out West there so many better places than here in the Eastern US. It’s drier out there and lots of places have great seeing conditions. I loved my trip to Canyonlands last year!

As for best places back East, I heartily agree on Cherry Point State Park, but one place consistently doesn’t make the list because it is so unknown. That is Rainwater Observatory in French Camp, Mississippi.

Not only is it located in one of the darkest places East of the Mississippi, it’s far south of places like PA and MI. Thus it has better views of the skies below the ecliptic. Centaurus A and Omega Centauri are amazing from this vantage point.

Better yet it has numerous scopes for people to view through, including a 26 inch Ritchey-Chretien in a dome and 36” DOB. It has several power outlets to plug your gear into, so that is never a problem. There’s also a bunkhouse with a kitchen, and an astronomy library. So you’re all set for a week without leaving.

Star parties are generally in April and October. But access is available at other times, by calling ahead. Of course like a lot of places in the East it gets a fair amount of cloudy nights, and a dew heater is recommended. 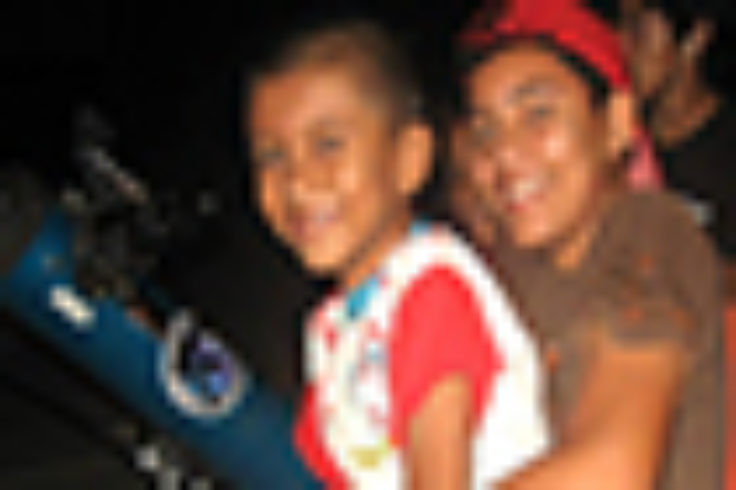