Until rather recently, if you wanted to take moderately wide-field pictures of the sky that also went deep, your choice for commercial equipment was limited to Schmidt cameras and old-fashioned film. There was really no other way to do it.

Now there is. Dean Koenig and his team at Starizona, a telescope manufacturer and store based in Tucson, Arizona, have painstakingly developed an elegant system called HyperStar. It is a special lens system that retrofits to Celestron and Meade Schmidt-Cassegrain telescopes (SCTs), turning them into wide-field, f/1.8 imaging systems. 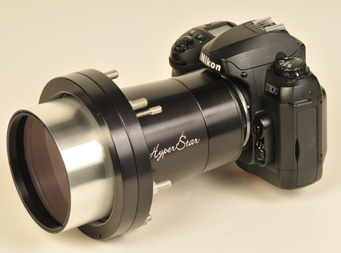 Starizonaâ€™s HyperStar system replaces the secondary mirror assembly on selected Celestron and Meade Schmidt-Cassegrain telescopes, turning them into powerful, wide-field imaging systems for use with SLR and astronomical CCD cameras.

HyperStar is not a visual tool. Rather it is a sophisticated lens system that mounts to the front corrector of the SCT and places the camera at the telescope’s prime focus. The observer’s head would block light from entering the telescope if he or she tried to use it visually. One of the reasons I like HyperStar so much is that it has enabled me to expand my photographic comet hunting by capturing deep images with exposure times measured in seconds rather than minutes. 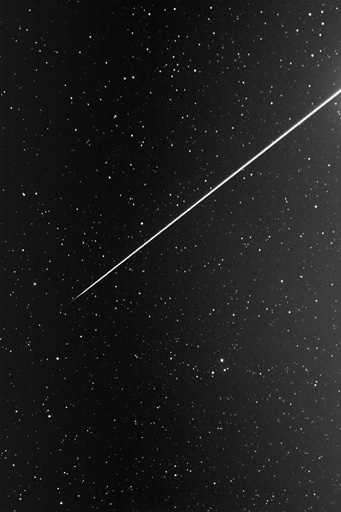 An unexpected meteor flashed through the field of the unusual cataclysmic variable star TV Corvi while the author was monitoring it in December 2005. Stars as faint as 18th magnitude appear in the 30-second exposure with a HyperStar-equipped 14-inch Celestron Schmidt-Cassegrain telescope. The field is more than a degree tall with north up.

Dean is one of the most interesting people I know in the astronomical community. Over the years we have observed together on countless occasions. He’s also been exceptionally helpful when it comes to keeping my telescopes running smoothly, since he knows that I have 10 thumbs. I remember one time we were spending night after night struggling to bring an old Schmidt camera to focus on film, when we were interrupted as the stars overhead simply dimmed. It turned out that a violent dust storm, born half a world away over a great Mongolian desert, had crossed the Pacific and was blanketing our Arizona sky that night.

There was another time I call Dean’s magic night. We were trying to install a CCD camera into my redesigned 12-inch Schmidt camera. Dean bore-sighted down the tube, took a guess as to where the camera needed to be, locked it down, and asked me to take a test picture. The image came back with a field full of perfectly focused stars, all beautifully aligned! Instead of taking four nights, this focusing job took four minutes.

HyperStar is like that CCD-equipped Schmidt camera, since it turns a long-focus SCT into a fast, wide-field powerhouse of an imaging telescope. My 14-inch scopes record 18th-magnitude stars in single, 30-second exposures.