The Grand Canyon Star Party is one of the largest public star parties in the United States. Since 1991 the Canyon has welcomed amateur astronomers dedicated to sharing the beauty of the night sky with the public. Today all National Parks officially recognize dark skies as one of their most precious assets. 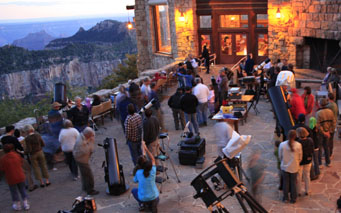 As darkness encroaches on the Canyon, North Rim Lodge visitors begin to gather around telescopes on the Sun Porch.

The 2009 GCSP was held from Saturday, June 13th to the following Saturday. Atypical early monsoon clouds and showers early in the week threatened to wash out the whole event until a thunderstorm Wednesday cleared the way for some extraordinary observing.

When the clouds cleared, the silence under the canyon’s skies was as deafening as the skies were heart-stopping. Soft murmurs of the grateful public waiting patiently to view Saturn, globular clusters, nebulae, galaxies near and far through telescopes large and small were punctuated by exclamations of, “It’s so beautiful!”, “That is awesome!”, and, in the words of one young Italian girl beholding M13 for the first time, “Oh papa! Bella Stelle!” This event transcended race, gender, age and nationality. The language of starry skies is universal . . . pun intended. 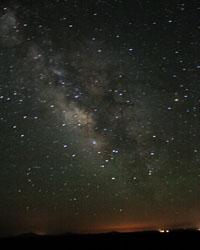 The relatively small size of the North-Rim party results in a personalized experience for the public, and the extra 1000 feet in elevation over the South Rim treated attendees to brilliant views of southern skies down to -45 degrees. When the public left, many astronomers simply kicked back to enjoy the naked-eye spectacle of the Milky Way, bright as the lights of a distant city, and silhouetting thin dark clouds hovering in the south.

In the end, the rain held off and the Party wrapped up on Saturday June 20th with a hearty toast at the North Rim Saloon.

Next year’s Grand Canyon Star Party will be held from June 5th to 12th. Think about making the trek to the North Rim. There is certainly no grander place for a star party!

We happened to be at the North Rim June 18 and 19 with a active vacation group. We were able to look through several telescopes and see Saturn! It was a first for us! The people with the telescopes were so welcoming and did not talk above our level! I say "thank you!" to all the astronomers that shared their passion with us! I have a telescope but am still looking at the moon! I will work on expanding my knowledge a little thanks to this experience!
Thanks again!