This past weekend marked a key moment of the International Year of Astronomy, with 100 beautiful hours devoted entirely to astronomy throughout the world. “An event 400 years in the Making” blasted the poster mounted by the G Wiz Science Center in Sarasota, Florida, where I’d been invited to speak. The program was designed to break the IYA’s global plans into small, local events, and Sarasota was an ideal place for one of them. 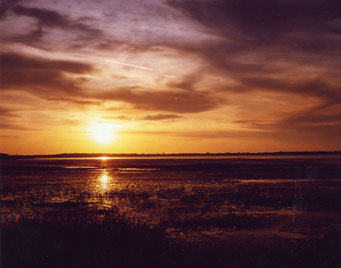 This Sarasota sunset transitioned one day to night during the 100 Hours of Astronomy celebrations held in Florida last weekend.

The city has changed much since I first visited there in 1976. Now one of state’s largest cities, it straddles the Gulf Coast where it’s surrounded by majestic lakes, tall trees, and a rich variety of marine wildlife.

I began one of my lectures by asking if anyone in the audience remembered Paula Eppstein, a long time Sarasota resident who died in 2004. Several hands went up, and I was delighted because it showed that the activist role she played in the city’s arts and science projects had not been forgotten. Before moving to Sarasota in 1978, she worked with her husband, Lothar, running an arts, music, and science camp at Lake Placid, New York. Called Camp Minnowbrook, it was extraordinarily successful. Under the pristine summer Adirondack sky, it gave girls and boys an opportunity to look at a menu of planets, double stars, star clusters, and galaxies. The camp prospered for many years until Lothar’s declining health forced it to close after the 1976 season (he died the following year).

In one sense, Camp Minnowbrook plays an important role in the IYA. Many of the children who went there retained their love of the night sky and have become active in IYA. And it was through a camp connection that I was invited to the G Wiz Science Center to share in its festivities for 100 Hours of Astronomy.

Celebrating the IYA event in Sarasota seemed extra fitting to me because of the city’s connections to astronomy. One of the most noteworthy involves George Fleenor, who lives just north in Bradentron. He has been fighting a mostly successful struggle to have the Sarasota’s streetlights retrofitted to be more astronomically friendly. The city has made admirable progress, carefully shielding the streetlights on the beaches to protect a large population of sea turtles, which can become disorientated by nighttime lighting. The city center is still too bright for most astronomical observing, but progress is being made.

There is, however, an interesting astronomical oddity near the center of the city, albeit not an official one. In the halls and alleyways of the history of astronomy there are only a handful of people who standout as great visual comet hunters. That the names of two of them should meet at an intersection in Sarasota seems rather unusual. Nevertheless, that’s the case where Swift Road and South Tuttle Avenue cross near the city center. While the thoroughfares aren’t named for the famous astronomers, the intersection certainly brings to mind Comet Swift-Tuttle in 1862, and the discovery soon after of it being the source of August’s annual Perseid meteor shower. If Fleenor’s dream of shielding all of Sarasota’s streetlights eventually turns to reality, perhaps some future observers with catch sight of a Perseid meteor or two from this intersection.

Mr. Levy, get into auto racing! As a amertur astronomer in high school and lover of opening the trottle (most of the time playing more of that than doing astrnomy) I would susjust this. Watch some Nascar or Formula one if ya get speed channel. And if ya don't like to watch racing, try some racing games like NEED FOR SPEED PRO STREET. Give a try. Because driving at 200+ mph get kinda hairy some times but fun(That in a racing game).

I will be setting up my telescopes at our local high school and middle school football games. A sidewalk astronomy service to the community with info on hand about saving $$ with full cutoff lights for the parents and a surprise for any who want to look. I get the best "kicks" from astronomy not from the visuals, but from the audible "Wow"s from the spectators getting a first taste of my favorite sport, catching antique photons!