Of Asteroids and Star B.Q.s

One of the small worlds orbiting the Sun has a new moniker. The International Astronomical Union has named asteroid 120349 Kalas in honor of husband and wife John and Elizabeth (Liz) Kalas for their years of promoting astronomy at public events. John specializes in displaying solar activity with hydrogen-alpha telescopes to groups of young people. In addition to assisting her husband on crowded afternoons and evenings, Liz is an award-winning master quilter. 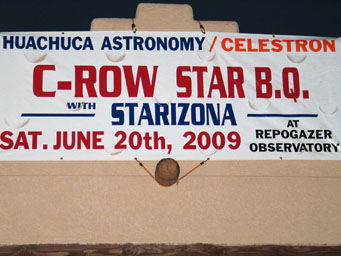 The welcome sign at Huachuca Astronomy Club's C-Row Star B.Q. where the author announced the naming of asteroid 120349 Kalas in honor of John and Elizabeth (Liz) Kalas for their years of public outreach in astronomy.

The story behind the asteroid naming began in 2001 when Tom Glinos asked if he could place his new 20-inch Ritchey-Chrétien telescope at our observatory. My wife, Wendee, and I agreed, and the scope become a part of a comet-hunting program, called CN3, that I have conducted since 1965. On December 12, 2004, our team discovered a faint asteroid with the scope. Designated 2004 XC42, it was about 20th magnitude, which is the limit for asteroids we can detect with the 20-inch and about as faint as you have to look today if you want to discover asteroids. Once the orbit of 2004 XC42 was determined with sufficient accuracy, the Minor Planet Center assigned it the permanent number 120349 and, as the discovers, we had the privilege of proposing a name. It was made official two weeks ago.

This past weekend was a particularly busy one for John and Liz’s outreach activities. Keith Mullen of southeastern Arizona’s Huachuca Astronomy Club had organized a very nice star party called “C-Row Star B.Q.” sponsored, in part, by Celestron. Although it’s a star party for club members and their families, it had all the attractions of a big public event, including door prizes personally called out by Celestron CEO, Joe Lupica. There were lectures during the afternoon, including Kim Rogalski’s insights about the geology of the area, and Bob Gent’s take on some of the national astronomy societies like the Astronomical League and the International Dark-Sky Association. Noted deep-sky observer Steve Coe showed us some of his photographic accomplishments, and I shared some ideas about the relationship of astronomy and literature from my recently completed PhD dissertation.

During the afternoon we had a chance to visit Doug Snyder’s nearby observatory and see his beautiful 20-inch Obsession telescope. During the spring of 2002, he used the scope for the co-discovery of Comet Snyder-Murakami, which turned to be a very nice telescopic comet and one of the latest (and now very rare) visual comet discoveries.

Back at the C-Row Star B.Q. at Keith Mullen’s RepoGazer Observatory, the crowd of enthusiastic amateur astronomers were preparing for night. Near the end of the evening lecture program I checked that John and Liz were in the audience before making the announcement that our asteroid discovery had been named in their honor. We felt that it was important to make the announcement at this star party because it was held as part of the International Year of Astronomy 2009, a celebration in which public outreach plays a major role. John and Liz represent what astronomy outreach is all about — sharing telescopes, inspiring people to learn about astronomy, and especially encouraging as many people as possible to go out at look toward the stars.