In the early 1960s, the Montreal Centre of the Royal Astronomical Society of Canada held an annual Star Night in Westmount Park. I looked forward to those events, since they gave me some of my earliest opportunities to peer through many telescopes. Eventually I ended up volunteering to help with future events. 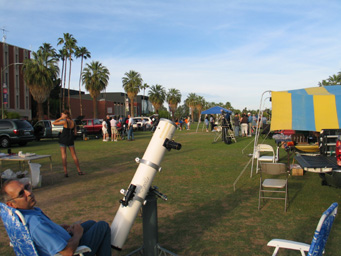 The University of Arizona mall fills up with telescopes as the 2009 Star Night gets under way last weekend. The author and "Apollo," his 6-inch f/8 Cave reflector built around 1970 during the heyday of the Apollo Moon missions, are in the foreground.

It makes sense that the old idea of Star Night is having a renaissance of sorts with present day star parties. One of the major annual events of our National Sharing the Sky Foundation is a Star Night held on the spacious, grassy mall at the University of Arizona in Tucson. Last weekend was our 13th, and it was a special one, helping celebrate the International Year of Astronomy. Unfortunately, it was also one of only two that was hindered by clouds.

We couldn’t run the event without the help of others, especially the Tucson Amateur Astronomy Association. Member George Barber provided his sound system, which played soft music in between the announcements and welcoming messages I had for the crowd. John and Liz Kalas, and Thom and Twila Peck have been with us for every minute of every year, and the Flandrau Science Center officials Michael Terenzoni and Michael Magee provide a base of operations.

Each year our Star Night offers something different, and this year’s highlight was Saturn, whose nearly edge-on rings caused many a viewer to step back and ponder his or her place in space and time. Especially now, Saturn’s great ring system remains a show stopper.

Partly because local television outlets didn’t give us the support they’ve provided in the past, the attendance was down this year. Nevertheless, hundreds of visitors came by to talk astronomy and enjoy the views through our telescopes. Some even got to share their memories of past Star Nights, like the one on March 30, 2001.

That evening as we were finishing up a Star Night at Sabino Canyon several miles northeast of the University of Arizona, some of us noticed a red glow behind the Catalina Mountains to our northeast. By 10:30 the crowds were gone, but the reddish glow persisted. Suddenly our cleanup activities stopped as the glow evolved rapidly into an exquisite rayed arc of long, tenuous auroral light. It was by far the best aurora I’ve ever seen from Tucson, and it even rivaled some displays I’ve seen from Canada.

As in the past, this year’s Star Night was successful in giving some people their first look through a telescope — a look many of them will never forget.