Make Way for the LightBridge 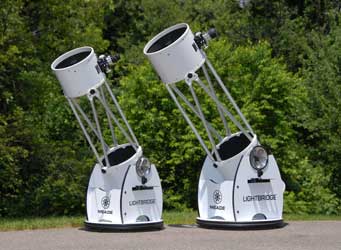 Great performance, great looks, or great price, you don't have to pick with Meade's new LightBridge Dobsonian telescopes. You get all three in one package. The LightBridge scopes are the first mass-produced Dobs with a truss-tube design — until now a feature found only on homemade and premium-priced commercial instruments.

The truss tube is a hallmark of portability, and the Meades are no exception. Even the 12-inch LightBridge (8- and 10-inch models are also available, and a 16-inch is planned for later this year) will fit in a small car with room to spare, and one person can set up the scope for observing in less than 5 minutes. The heaviest single component of the 12-inch weighs less than 35 pounds (16 kilograms). And the LightBridge design is so compact that even an experienced eye can mistake the 12-inch scope for a 10-inch and the 10 for an 8.

Despite a few nitpicks noted while unpacking and assembling 10- and 12-inch models, I had an exceptionally enjoyable evening of observing that followed. Indeed, what began as a quick look from my suburban driveway at a pair of galaxies in the Virgo Cluster ended up being a 3-hours tour involving nearly 100 galaxies scattered between eastern Leo and the Bowl of the Big Dipper. I was so captivated by the view through the 12-inch, that it wasn't until I decided to call it quits for the night that I realized I had never looked through the 10-inch standing only feet away. Testing that scope had to wait for another night.

My full review of both scopes appears in the October issue of Sky & Telescope, now on sale at newsstands. A related item within the review points out that this year marks the 50th anniversary of the modern Dobsonian and explains why these telescopes might never have been developed were it not for an equatorially mounted 6-inch f/9 Newtonian reflector built by Allyn J. Thompson in the mid 1940s.