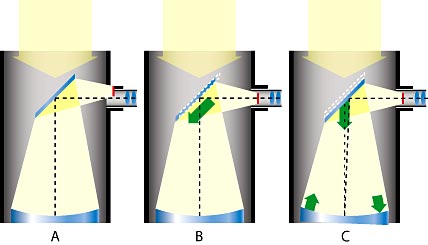 The secondary-mirror offset is no doubt the most misunderstood aspect of collimation. Luckily you don't need to understand it to collimate your instrument, but given the level of discussion the subject generates, it's worth delving into.

If you place the secondary centered in the telescope tube, with the primary mirror's optical axis at the center of the diagonal mirror's elliptic face, diagram A (greatly exaggerated for clarity) shows what will happen. The shaded area shows where light from the whole primary can be seen reflected in the secondary — at the focal plane, this defines the fully illuminated field. Inside it, you catch light from the whole mirror; outside of it, some light is lost. You would want the fully illuminated field to be centered in the eyepiece, but as you see here, it isn't — it is shifted away from the primary. This situation is known as nonoffset collimation. Although this condition doesn't cause any great problems, it is easily avoided.

But what if you want the fully illuminated field centered in the eyepiece, but must leave the secondary mirror centered in the telescope tube? It can be done, as shown in diagram C, by slightly adjusting the tilt of both mirrors. Now the optical axis is slightly tilted within the telescope tube. In practice, this is not a problem because the tilt is never more than a small fraction of a degree. Since the secondary is offset down the tube, this is known as partially offset collimation. It is no doubt the most common situation, even among telescope owners who may not even realize that their scope's secondary is offset at all.

If you use a sight tube to center the secondary as described in Step 1, you have automatically offset the secondary toward the primary mirror, thus ensuring that the fully illuminated field is centered. (When using the sight tube, you make the near and far edges of the secondary appear to have the same angular size. This means that the distance from the far edge of the secondary to the optical axis is greater than from the near edge to the axis. This constitutes an offset.) Both partial and full offset conditions give good collimation.

If you want to calculate the offset, use this simple formula:

This is how much the secondary is offset toward the primary mirror and also how much it should be offset away from the focuser for fully offset collimation.

I'm always confused by the formula for offset, which refers to the "secondary size". Is this the major or the minor axis of the elliptical secondary mirror?

I assume that the "size" is generally meant to be the diameter of the cylindrical glass rod from which the mirror was cut (at a 45 degree angle). That would correspond to the minor axis, which seems to be what people mean when they cite this formula, although I think most people's intuition for the "size" of an ellipse would actually be the major axis.