100 Hours of Astronomy (100HA), taking place from April 2 to 5, may already be the largest science outreach event in history. This Cornerstone Project of the International Year of Astronomy 2009 (IYA2009) will bring the universe to millions of people worldwide with live online programs and thousands of public star parties.

Tens of thousands of amateur astronomers already plan to be out among the public with their telescopes, especially for the 24-hour Global Star Party to take place on Saturday the 4th as evening twilight sweeps around the globe.

There's also "Around the World in 80 Telescopes," a 24-hour series of webcasts from research observatories on April 3rd. Professional astronomers will take viewers inside their telescope domes and control rooms to show what they do and how.

And there’s more to shoot for than the Moon, Saturn and other celestial delights. Awards with prizes from 100HA sponsors will be given out for the best public events in several categories. (Register your event here.) The grand prize is a David H. Levy Comet Hunter telescope from Explore Scientific, autographed by the famed comet hunter himself. All winners will receive a Celestron Sky Scout, an official product of IYA2009, with more prizes to be announced. Award announcements will be part of a special 100HA closing session at the International Astronomical Union’s General Assembly in Rio de Janeiro, Brazil in August. The prizes are for public events registered on the 100HA website. Here all events worldwide are displayed in maps and lists so members of the public can find them. 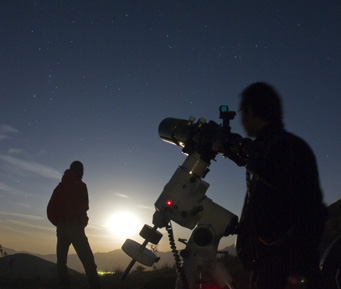 Everyone wins in this global event, however, and there’s something for everyone to take home. Custom certificates of participation will be available for download by all organizers of events that get registered on the official 100HA global web site. Organizers will share the results of their activities in an online report and a personalized certificate will be generated for download and printing. The reports — along with photos and videos — will comprise a permanent record of 100HA and provide examples to others taking part in more IYA2009 public outreach efforts to come.

The International Year of Astronomy 2009 has just begun, but the world is taking its motto to heart: "The universe, yours to discover." The celebration marks the 400th anniversary of Galileo's first astronomical discoveries, in 1609.