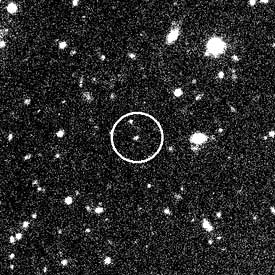 The circled white dot is one of 12 newly discovered Saturnian moons. This satellite, temporarily designated S/2004 S11, is about 6 kilometers (4 miles) across.

There was once a time when the discovery of a single new moon was a landmark event in astronomy. Now, satellites come by the dozen.

David Jewitt and Jan Kleyna (University of Hawaii) and Scott Sheppard (Carnegie Institution of Washington) reported 12 new Saturnian moons earlier today in a Minor Planet Electronic Circular and on their Web site. The group discovered the moons on December 12, 2004 while surveying Saturn's vicinity with the 8.2-meter Subaru Telescope in Hawaii. Follow-up observations in January, February, and March 2005 with Subaru and the 8.1-meter Gemini North Telescope, also in Hawaii, confirmed that these objects orbit the ringed planet.

Assuming that these newly discovered moons are dark gray-black, reflecting 4 percent of the sunlight that strikes their surfaces (which is the value for Saturn's outer moon Phoebe), they range in diameter from 3 to 7 kilometers (2 to 4 miles). All but one orbit Saturn in the retrograde direction — opposite the planet's rotation. They follow highly eccentric orbits that are inclined to the planet's equator and ring plane, and their average distance from Saturn is great: about 19 million kilometers (12 million miles). Given their wide, looping, and inclined orbits, all 12 are considered "irregular" satellites that were almost certainly captured by Saturn's gravity in the solar system's early history. The mechanism of this capture remains a mystery, however.

Eight of the 12 moons share similar inclinations and average distances from Saturn. "These 8 could be fragments of a parent object that was shattered in a collision," says Sheppard.

Jewitt and Sheppard have previously discovered 46 satellites of Jupiter, 1 of Saturn, 2 of Uranus, and 1 of Neptune. Despite his previous successes, Sheppard still feels the thrill of discovery. "It's always a good rush to find an object moving at the expected rate of a satellite," he says. "Nothing is known about the newly discovered object and it is very exciting to observe it over the next several weeks and months in order to determine its orbit and to see how each of the new satellites fits into the overall picture."

The Jewitt/Sheppard/Kleyna survey was so wide and sensitive that it probably completes the census of outer Saturnian moons down to about 5 kilometers in diameter. But smaller moons may lurk undetected at great range from Saturn, and Cassini is bound to find more tiny moons orbiting near or within the rings.

The International Astronomical Union has assigned the provisional names S/2004 S07 to S/2004 S18 to the dozen new moons. The satellites should receive permanent names in about a year, after the discovery group has refined their orbits at the next Saturn opposition. Retrograde Saturnian satellites are generally named for Norse giants. Prograde outer satellites are usually named for Gallic or Inuit giants.

The moving white dot near the center is the newly discovered Saturnian moon S/2004 S11. The images comprising this movie were taken about 30 minutes apart at the 8.2-meter Subaru Telescope in Hawaii. Stationary objects are stars and galaxies.

For a tabulation of all 156 known moons see SkyandTelescope.com's Guide to Planetary Satellites.