You don't have to be an Avatar fan to know that habitable planets outside the solar system capture the public's imagination. And, as the Kepler mission continues to find evidence of hundreds of new worlds, astronomers are always hoping that the next discovery will be, like the fictional Pandora, able to support life. 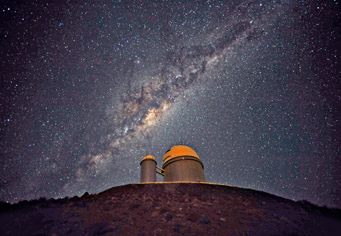 The ESO's 3.6-meter La Silla telescope at work. The moonlit building are below the Milky Way's central bulge. The telescope, inaugurated in 1976, currently operates with the HARPS spectrograph, the world's most precise radial-velocity exoplanet hunter. Located 600 km north of Santiago at 2,400 meters altitude, La Silla was the ESO's first site in Chile.

Such a planet would lie within the region around its star known as the habitable zone: not too cold and not too hot for liquid water at least somewhere on a planet's surface. Thickness of atmosphere and amount of cloud cover should also have a lot to do with the surface temperatures. But how can we determine, from many light-years away, whether a planet's atmosphere is helping or hurting?

A team of three astrophysicists has modeled a way to estimate this, assuming an atmopshere dominated by nitrogen, water, and carbon dioxide. Their method involves determining the planet's likely albedo, or reflectivity, which is another way of saying how much light and heat the planet accepts or rejects from its star. White clouds mean a high albedo and a cooling effect. Enough clouds might reflect away enough heat to allow liquid water even on a fairly close-orbiting planet.

(Equally important is how efficiently the planet radiates away the heat it does collect. The difference between these two processes is known as the greenhouse effect.)

The team has used its atmosphere-modeling method to estimate that a recently found planet, HD 85512b in Vela, may be cloudy enough to allow liquid water despite being uncomfortably near its star.

"This is a very exciting planet because if it is rocky, it will be the second confirmed planet that is within the habitable zone of its star," says Lisa Kaltenegger (Harvard-Smithsonian Center for Astrophysics), one of the paper's authors.

The planet orbits HD 85512, a 7th-magnitude orange dwarf (spectral type K5) 36 light-years away. It was recently discovered by the planet-hunting team using HARPS (High-Accuracy Radial-Velocity Planet Searcher), the super-precise spectrometer mounted on the European Southern Observatory's 3.6-meter telescope at Chile's La Silla Observatory. The star's slight radial-velocity wobble indicates that the planet has a mass of at least 3.6 Earths and probably not a great deal more than that. It orbits the star every 58 days.

There's no way to tell from mass alone whether the planet is small and rocky — like Mercury, Venus, Earth, and Mars — or large and gassy, like a mini-Neptune. For HD 85512 to be rocky, it must have a diameter around 1.4 times that of Earth. If the planet's diameter ends up being around twice that of Earth, HD 85512b will have a density more like that of gas-and-ice-rich Neptune.

Of course even if this newly discovered planet is as balmy as a heated swimming pool, there's no guarantee that it harbors life. "Though we consider water the most fundamental ingredient for life, many other ingredients are probably necessary," says exoplanet specialist Sara Seager (MIT). "Unfortunately, the other conditions are not easily observable."

For more about the new batch of HARPS discoveries, which include 16 super-Earths, see the ESO's press release.

A nice summary of the recent discoveries from Kepler.

However, there is an error in the name of the European organization that operates the the La Silla observatory and some of the other southern hemisphere observatories. I've seen this error before (once in an astronomy and space article written by a well known science writer in a very well known news magazine), but to see it here is a bit surprising as the name of the organization is on the press release that this article links to.

The initials for the spaceflight organization is ESA, which stands for European Space Agency.

The initials for the astronomy organization is ESO, which is for European Southern Observatory. If you don't believe me, just go to the press release. It's right there.

Please try to get their name right. I'm sure the folks at ESO would like people to know that they are not a "space organization," but they do spend a lot of time studying what is out there.

Other than that, it is a nice article. Maybe, it will be in the magazine too.

Exoplanet research is exploding. If you keep a historical trend from 2003 until present you can plot the explosion. exoplanet.eu URL keeps a good log, currently 687 including some KOIs. My problem-when doing trend plots and histograms for the data (includes the 1235 KOIs), the evidence for comfortable, habitable earths looks shaky and not so conclusive. Currently the Milky Way is teeming with hostile exoplanets compared to earth.