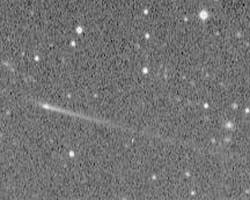 133P/Elst-Pizarro was captured September 21, 1996, by the Spacewatch 0.9-m telescope atop Kitt Peak, Arizona. But despite the fact that astronomers named the object as if it were a comet, debate rages on about the body's true nature.

There once was a time when deciding whether a newly discovered solar-system object was an asteroid or a comet was simple: If it looked fuzzy, it was a comet; if it didn't, it was an asteroid. But the line between asteroids and comets has grown ever blurrier over the years as astronomers have found new classes of objects that straddle the boundary. Now comes 133P/Elst-Pizarro, which seems to have a split personality. In some ways it resembles a main-belt asteroid, in others an elderly comet.

First detected in 1979 as a starlike point of light, Elst-Pizarro was classified as an asteroid. But in 1996 a new photograph by the European Southern Observatory's Guido Pizarro showed the 18th-magnitude object accompanied by a slender tail, leading astronomer Eric Elst of Belgium's Royal Observatory to classify it as a comet. The problem lies with the orbit of the supposed comet, which is entirely within the main asteroid belt between Mars and Jupiter. Explaining how a comet could originate in the outer solar system and end up circling among the asteroids has posed a daunting, and yet unsolved, problem of orbital dynamics. Astronomer Imre Toth of Hungary's Kolkony Observatory offered an alternative explanation, proposing that the tail recorded on Pizarro's photograph was the result of an impact on the surface of an asteroid that ejected dust into space.

That idea was recently challenged by astronomers at the University of Hawaii. At last September's meeting of the American Astronomical Society's Division for Planetary Sciences, graduate student Henry Hsieh presented new evidence for Elst-Pizarro's cometary behavior. On four occasions between August and December 2002, Hsieh and his colleagues observed the object, which was once again trailing a long, narrow tail. They saw the tail slowly fade over the 4.5-month observing period — too slowly, Hsieh says, to be composed of impact ejecta. Instead, the Hawaii group proposes that Elst-Pizarro is an old cometary nucleus, perhaps with a few remaining patches of ice that only vaporize when exposed to sunlight. If the object's rotational axis were tilted, the release of volatiles could be a seasonal event. Indeed, Hsieh points out, the 1996 and 2002 observations of Elst-Pizarro's tail were made at roughly the same points in its 5.6-year orbit.

Still, the asteroid explanation seemed more attractive to many in attendance at the meeting, including Massachusetts Institute of Technology's Richard P. Binzel. He is urging the Hawaii team to consider Elst-Pizarro an "activated asteroid," on which a modest amount of ice was excavated by an impact event and has continued to vaporize, ejecting enough dust to resupply the faint tail. "Few people would be surprised to see an asteroid at [this distance] that contains some volatiles," Binzel says. But if that's the case, Hsieh points out, Elst-Pizarro should have plenty of siblings in the asteroid belt. "As of this moment, it's a one-of-a-kind object." On one point he and Binzel agree — further observations might change that.