On the afternoon of January 8th, a small group of journalists and scientists headed north from downtown Austin, the venue for 219th meeting of the American Astronomical Society, to the University of Texas campus. There we learned about HETDEX, the Hobby-Eberly Telescope Dark Energy Experiment, which David Lambert, the director of McDonald Observatory, introduced as the first major effort to "map the evolution of dark energy as a function of time."

The universe has been expanding since the Big Bang, but observations in the last couple of decades show that this expansion is accelerating, rather than slowing down. Dark energy was first postulated in 1992 as the hypothetical force that causes this stepped-up expansion. Calculations suggest that it constitutes about three-fourths of the energy in the universe — yet remains one of the least understood scientific phenomena. 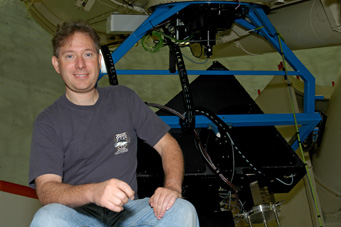 Researcher Gary Hill poses with the prototype of VIRUS, for Visible Integral-Field Replicate Unit Spectrograph. About 145 of these will be built for the HETDEX effort.

Over three years, HETDEX will plot the three-dimensional positions of one million galaxies at different eras of the distant past, which astronomers will use to calculate how fast "normal" (baryonic) matter has been drifting apart since the Big Bang. In the process, the experiment will help generate what could be the grandest map of the universe yet.

"Humans have always been cartographers," says Gary Hill, the experiment's principle investigator. "This is the biggest map you're going to get."

HETDEX is not meant to answer all questions on the nature of dark energy, but it should eliminate a few theories and narrow the possibilities of what this phenomenon could be. Hill and his colleagues are looking for evidence of baryonic acoustic oscillations — "sound waves" that rippled through the hot plasma that pervaded space in the first 400,000 years after the Big Bang. Cosmologists think that when the universe began to cool, these perturbations left an impression, much like the crests and troughs created by a stone thrown into a pond, that the HETDEX team now hopes to chart spectroscopically. Dusting these ancient "fingerprints" should give the team an idea of how fast the early universe expanded, and the rate of its acceleration since. 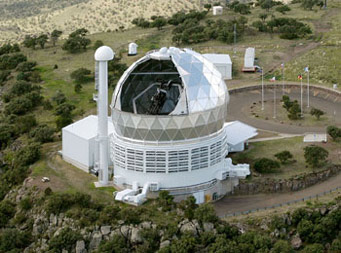 The heart of this experiment is a new device called VIRUS, short for Visible Integral-Field Replicate Unit Spectrograph. Each VIRUS is made of 230 fiber-optic cables that feed light from a small part of the sky into a spectrograph. "It can be built on an assembly line," jokes Hill. "We are catching up with Henry Ford here."

HETDEX will eventually utilize 145 VIRUS assemblies to scan 400 square degrees of sky covering most of the Big Dipper — 2,000 times the area of the full Moon. While VIRUSes could work with any telescope in the world, the chosen scope for this experiment is the Hobby-Eberly Telescope at McDonald's Observatory. 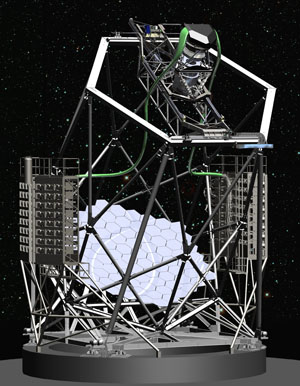 Artist's concept of the upgraded Hobby-Eberly Telescope. The VIRUS spectrographs are contained in the curved gray "saddlebags" on the side of the telescope.

The giant scope has an unorthodox design that is well-suited for spectroscopy. Its segmented primary mirror, measuring 36 by 32 feet (11 by 10 m), is technically the largest in the world. But only a portion of its light can be focused on the tracker that rides above it, giving the HET an effective aperture of 9.2 m that ranks fourth in size worldwide.

To map dark energy, the telescope is undergoing a makeover to deliver a wider field and to accommodate all those VIRUSes. The tracker now sits in a garage on the Austin campus, looking like a mere scaffold without the silver-coated relay mirrors that are now being polished at the University of Arizona in Tucson. The light from the primary, the team explains, will bounce off four other mirrors before it is fed to the VIRUSes. The base of the tracker is also being modified to support the weight of these four mirrors and 34,000 fiber-optic cables.

The entire unit will be dismantled and shipped to the McDonald Observatory sometime in June this year. Then the team will correct optical errors, and program the on 140 new-moon nights over a 3-year period. On days the HETDEX team is not tracking down evidence for dark energy, other research teams will be able to use the VIRUSes, which will become permanent additions. 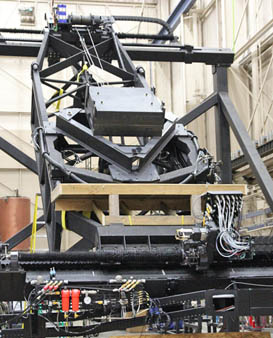 A new tracker, which will be suspended over the Hobby-Eberly Telescope's primary mirror, is now taking shape in a large machine room at the University of Texas in Austin.

Two data pipelines, quite aptly named Vaccine and Cure, will process the ginormous amount of data collected using these VIRUSes. They will look for the Lyman-alpha emission line of hydrogen, which will help them chart the position of a galaxy as a function of space and time. Lyman alpha has an ultraviolet wavelength of 121.5 nanometers, but the target galaxies are so far away that their emissions are redshifted to blue and green portions of the visible-light spectrum.

The team hopes to have its first results four years from now. Hill also hinted at a possible citizen-science project along the lines of Galaxy Zoo that might find a use for the data beyond HETDEX's goals.

Both HETDEX and its goals seem like wild science fiction, and at times our 1½-hour briefing felt more like a Steven Spielberg movie than astronomical research. But this unique undertaking in forensic astronomy is very real, and very promising. In four years dark energy may not be so dark after all.

Since the accelerated expansion of the universe was first discovered in 1998, whoever proposed it in 1992 must have been really, really smart. I'm sure that was just a typo, since speculation about some form of a cosmological constant predates even that by many years.

I think Dark evergy and black holes are the same thing. First the big bang scared the entire univers with light. that area the know universe, became our fish tank. since ther e is nothing holding the fish tank as we know it. the universe is simply decaying or unraveling back into its original state of absolute nothing. my guess

"Grandest map in the universe will be displayed after the next four years. That is very interesting! We all know that the deepest secret of the universe has not yet been revealed until now. Thus, this is the boldest and most promising plan ever made by humankind. Hope it will succeed. Looking forward what will happen four years from now.