I have many memories associated with New Orleans. My first trip there to visit relatives was on a train during the 1950s. I remember a big crowd pushing its way onto the train and there being nowhere near enough seats for our family of six to sit together. Then suddenly our family was ushered to a different section of the train with lots of comfortable chairs and plenty of quiet. Dad explained that the staff was just being nice to us. It was much later that I learned that he must have paid a fortune to move us up to the first-class section. On another trip to the Crescent City, this time aboard an Eastern Airlines Constellation, I suddenly decided that I had enough traveling for one day, and I politely inquired if the flight attendant could let me off in midflight.

Those were the days before the sky became a major influence in my life. As I grew older, in addition to visiting my grandparents, aunts, uncles, and cousins, the city's Pontchartrain Astronomy Society became increasingly important to me. I enjoyed the club's enthusiastic membership and inspired leaders. Barry Simon and Mike Sandras, in particular, have become long-time friends, and I have fond memories of watching the 1984 annular solar eclipse with them as it passed near the city. 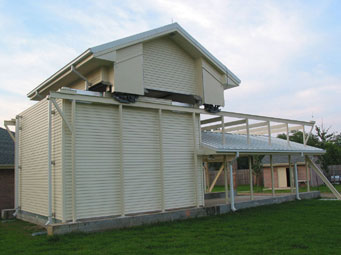 Outside of New Orleans, on the north shore of Lake Pontchartrain, Joseph Aymond has built an impressive roll-off-roof observatory strong enough, he claims, to withstand the direct hit of a tornado. The steel building is seen here with its roof partially retracted.

Then came hurricane Katrina in August 2005. The following March I visited a city transformed. Sections of the once mighty metropolis now looked like a moonscape. I was there to lecture to a group of middle-school children about the wonders of the night sky in what seemed like the midst of a holocaust.

But New Orleans has reawakened during the intervening years. Where whole city blocks were in ruins, manicured lawns and new houses have sprouted. On the north shore of Lake Pontchartrain, Joseph Aymond has constructed the most amazing amateur observatory I have ever seen. Completed after the storm, he was taking no chances with the weather. A fully equipped Meade 16-inch telescope is housed in a building strong enough, Joseph insists, to withstand the direct hit of an F5 tornado, the mightiest possible twister. (If you’d like to see the details of his steel structure, visit the Ultimate Private Observatory.)

Nearby there's a beautiful field and smaller observatory housing an elegant vintage Celestron telescope. The field is available to any PAS member, and though Sandras, the club's current president, thinks the site is a bit underutilized, I think that with New Orleans's continued recovery and the International Year of Astronomy gaining momentum, this observing site will see much more use.

This year marks the 50th anniversary of the Pontchartrain Astronomy Society, and I was recently there to help them celebrate. The evening highlighted what can be accomplished in amateur astronomy in this brave new world of 2009. The society has a brilliant past, but its future, along with that of its host city, is bright indeed.

I enjoyed your talk Friday night. I drove 150 miles one way to hear you. I cannot put your book "Deep Sky Objects" down. It is great reading. You have given me a new light on astronomy making me yearn for more time at the scope.

I have named my telescope "Levy" because David H. Levy's books have given me so much passion in astronomy.