A Different Kind of Acid Rain

As molecules go, formic acid isn’t much to look at. You’ve got a carbon atom, two oxygens, and two hydrogens. Stick them together to make a little Tinkertoy arrangement, and there it is. 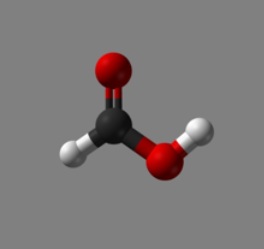 Nevertheless, formic acid has a way of commanding one’s attention. You’ll know this if an ant has ever bitten you, since formic acid is the active ingredient in ant venom. (It’s in bee venom too, but bee stings are more complicated.)

It also commands the attention of scientists interested in the origins of life. This is because formic acid is merely the simplest and shortest version of a fatty acid. In true Tinkertoy fashion you can replace one of it hydrogen atoms with a chain of carbons and end up with all manner of compounds that are biologically important — if nutritionally suspect. Or you can also attach an amino group to formic acid and make an amino acid instead.

All this plays into the question of how life on Earth came to be. Astronomers can detect formic acid in the cold dark recesses of interstellar space. Did the formic acid up there somehow play a role in the emergence of the first biologically active molecules down here?

Now we may have part of the answer thanks to the Tagish Lake meteorite. It’s been nearly 10 years since its blazing fireball ripped across the early morning skies of Yukon and northern British Columbia. What witnesses thought was an incoming missile proved to have a happier explanation. It was a massive meteorite — more than 50 tons — that disintegrated as it plowed through Earth’s atmosphere at high speed.

In what is surely the biggest break in meteorite history, a fragment of the meteorite was picked up and retrieved by a passerby, who used a plastic baggie to handle it and promptly tossed it in his freezer. Sitting there among the steaks, the meteorite remained uncontaminated by human hands and its temperature never rose above freezing.

This turned out to be very important, since the Tagish Lake meteorite has the highest carbon content of any meteorite ever recovered. It offers a fascinating profile of what kind of material might have made its way to Earth’s surface billions of years ago.

A decade after its recovery, techniques are still being developed to tease interesting details out of the Tagish lake meteorite. The latest is the report of abundant quantities of formic acid, four times higher than seen in any other meteorite.

The work was done by Chris Herd and colleagues at the University of Alberta in Edmonton. To find out more I spoke with Chris Herd. You can find the full interview in the latest episode of the Universe in Mind podcast.

Interesting... However, formic acid is just a carboxylic acid, not in any way a "version of a fatty acid". Fatty acids are ONLY carboxylic acids which have LONG hydrocarbon chains in place of the hydrogen atom on the left in the model shown. No long chain, no fatty acid! In addition, you cannot get an amino acid by attaching an amino group in place of the hydrogen on the left in formic acid. You would have to attach a group (other than an amino group) which had an amino group on the CARBON atom which was at the point of attachment.