Strange emission from a distant galaxy paints an enigmatic picture of what’s happening inside its core.

The devilish thing about black holes is that they like to throw wrenches in your work. Take the source WISE J233237.05–505643.5. Astronomers found it while looking for actively feeding supermassive black holes using NASA’s Wide-field Infrared Survey Explorer. But this source has confounded expectations.

Being the messy eaters that they are, black holes often shoot out jets when they gorge, and these jets, along with emission from the black hole’s accretion disk and from surrounding heated material, make the galactic centers in which black holes sit extremely luminous.

Supermassive black holes shoot out jets that can be thousands of light-years long. Most are straight and narrow, like that shooting from M87: 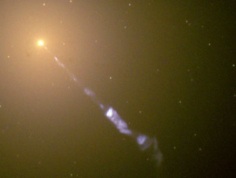 The black hole at the center of M87 is the source of a spectacular jet.

But when Chao-Wei Tsai (JPL) and colleagues looked at WISE J2332–5056 in radio wavelengths with the Australian Telescope Compact Array, what they saw was this: 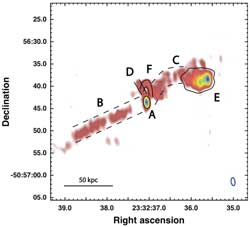 One jet (B) sticks out nice and straight from where the black hole lurks in the galaxy (“A” marks the host galaxy, not just its black hole; the scale bar in the bottom left = 163,000 light-years). But on the other side, the jet curves (C). Plus, there’s this weird linear doohickey (D) that might or might not be a related structure.

The radio observations aren’t the only conundrum: spectroscopic observations with the Gemini South telescope in Chile revealed more bizarre stuff. Active black holes are usually surrounded by what’s called a broad-line region, a region of gas clouds that takes its name from the fact that emission lines coming from it are broad. That’s in turn surrounded by the narrow-line region (you can guess how it got its name). Usually, these two sets of emission lines aren’t excessively shifted to shorter or longer wavelengths compared with each other.

But in WISE J2332–5056, the broad emission lines are significantly blueward of the narrow lines. That shift corresponds to motion, indicating gas within the galaxy’s core is flying in our direction at an incredible 3,800 kilometers per second (8.5 million miles per hour), more than 300 times the speed a rocket needs to fly in order to escape Earth’s gravity.

The broad lines also split into two peaks instead of one, and one is brighter than the other. If you’re thinking of an emission spectrum as a bunch of lines, that’s a little hard to visualize; astronomers usually display them as spikes in a continuum: 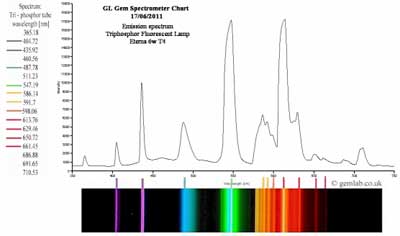 Broad lines should look like one large bump, but WISE J2332–5056’s double-hump, asymmetric broad lines (which I've traced in yellow) look like the back of a Bactrian camel.

That’s not normal, either.

This suspicious system has left astronomers perplexed. After studying WISE J2332–5056 in radio, infrared, optical, and X-ray, the team still hasn’t settled on a definite solution. 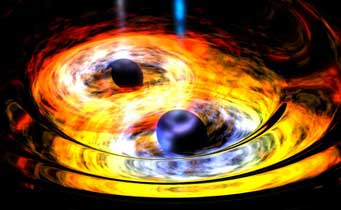 Astronomers have seen roughly a hundred galactic nuclei with double-bump broad-line emission, and many others with a peculiar X shape in radio wavelengths that might indicate a binary black hole. But there are only about a dozen sources in the sky confirmed to be two active black holes, says Tsai. Only two cases have black holes that are closer than 30 light-years apart.

A slightly different scenario is that one black hole is torqueing the other’s accretion disk as it flies by, creating a spiral arm in the disk that produces the asymmetric broad-line emission.

This idea particularly intrigues Luka Popovi? (Astronomical Observatory, Serbia), who explains that theorists expect some merging black holes can produce one or two spiral arms in an accretion disk. “I agree with the authors, that it might be a supermassive binary black hole,” he says. But the question remains whether there’s a good way in such an arm to create the strange emission, he adds.

Either binary scenario could explain the crooked jet, because a second black hole might have whipped the jet into its winding shape.

Or there might be no second black hole at all: the weird features might come from a spinning black hole with an asymmetric accretion disk, misaligned from the black hole’s spin axis and being dragged back into place. Of course, then there’s the question of what threw the disk askew . . .

Tsai stresses that all the suggestions the team has put forward are merely hypotheses. They’re currently gathering high-resolution radio observations that will hopefully help them narrow in on the answer.