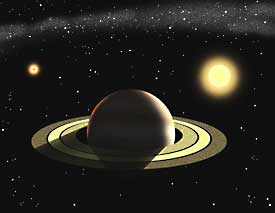 This artist’s conception illustrates the scene around the Gamma Cephei binary star system. Astronomers have found evidence for a planet orbiting the yellow star on the right every 2.5 years. The discovery makes this the first planet ever found in a binary system.

Can planets exist in a double-star system? This fascinating question, as old as science fiction, now has a clear answer. Gamma Cephei, a naked-eye star not far from Polaris, has a dim dwarf companion star in a roughly 70-year orbit and also a giant planet in a 2.47-year orbit, say Artie Hatzes (Thüringer Landessternwarte, Tautenburg, Germany), William D. Cochran (University of Texas), and other members of the McDonald Observatory Planet Search Team.

The McDonald group is monitoring about 180 stars for tiny wobbles in their radial (line-of-sight) velocities, the telltale sign of an orbiting planet. In the case of Gamma Cephei, good radial-velocity measurements go as far back as 1980. They show a huge, slow wobble indicating a companion star with at least 0.4 times the mass of the Sun (at least 400 Jupiters' worth) in a decades-long orbit that carries it from about 12 to 30 astronomical units from Gamma itself. These are about the distances of Saturn and Neptune from the Sun. The companion star is too dim to have yet been seen in telescopes; it's probably a red dwarf.

Buried deeper in the radial-velocity data is a slight — but persistent and very regular — oscillation with a period of 2.47 years. Since 1989 astronomers have suspected that an orbiting planet might be the cause, but now the McDonald team says it has a long enough run of measurements to be sure. They say the wobble indicates a body with at least 1.8 Jupiter masses swinging in a mildly elliptical orbit that carries it 1.7 to 2.5 a.u. from the bright star. This is about the distance of the asteroid belt from the Sun.

Gamma Cephei, shining at 3rd magnitude, is the brightest of the approximately 87 stars that have been found to have one or more planets. Located 45 light-years away, it's a yellow-orange subgiant of spectral type K1 IV blazing 12 times brighter than the Sun. Its mass is estimated at 1.6 Suns, it is beginning to expand and enlarge toward becoming a red giant.

Its red-dwarf companion star is probably so dim that it shines on the planet's night side with only a few times the brightness of the full Moon on Earth.

The find is really no great surprise. Astronomers have long known that a planet could maintain a safe, stable orbit in a binary system if it circles several times closer to one star than the other star ever ventures. But whether planets can form is such an environment has been more speculative. In their announcement paper, Hatzes, Cochran and their colleagues write that the Gamma Cephei planet "should provide an interesting case study for understanding how binary stars influence the planet-formation process."

Planets have been found orbiting other stars in binaries, but in those cases the two stars are dozens of times farther apart and live quite independently.