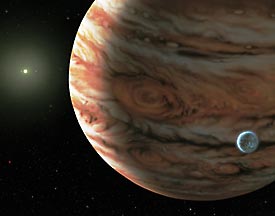 An artist's conception of the 'heavy Jupiter' distantly orbiting 55 Cancri. Located 41 light-years away, 55 Cancri is a 6th-magnitude G8 star slightly dimmer and yellower than the Sun. Its surface activity and rotation rate suggest it is 4 to 7 billion years old, compared to the Sun's 4.6 billion years. It's currently visible in binoculars low in the west after dusk.

The roster of planets found orbiting stars beyond the Sun jumped to about 90 today, when Geoffrey Marcy, R. Paul Butler, Debra A. Fischer, and their planet-hunting team announced 15 new giant worlds. Like the previous discoveries, the new batch revealed themselves by the tiny variations that their orbiting masses induce in the radial (line-of-sight) velocities of their host stars.

The new discoveries, like most of the previously known exoplanets, generally follow eccentric (elongated) orbits and are closer to their stars than the giant planets in our solar system are to the Sun. But there was one noteworthy exception.

Marcy and Butler announced that 55 Cancri (Rho1 Cancri) has a planet in a large, fairly circular, Jupiterlike orbit. It circles the star in 13 years, compared to Jupiter's period of 12 years, and at nearly Jupiter's distance from the Sun: about 6 astronomical units compared to Jupiter's 5.2. "We're finally entering the realm where we can detect planets similar to a planet in our own solar system," said Butler at a press conference this afternoon.

The planet is Jupiterlike in orbit only, however; it contains at least 4 times Jupiter's mass, as revealed by its gravitational influence on the star. It may be even more massive if its orbit is oriented far from edge-on to our line of sight, something there is no way to know.

Marcy, Butler, and Fischer have long discussed the possibility that such a far, slow planet orbits 55 Cancri. But only now do they have a long enough arc of its orbit to declare that it is definitely real. With each passing year, planets with ever-longer periods and ever-larger orbits are coming within the various search programs' time horizons. Marcy and Butler began collecting their data 15 years ago, but for most of the 1,200 stars that their group is following, the timeline is still less than a half dozen years. Marcy predicted that solar-system analogs (stars with Jupiter-period planets) should be "coming out in bulk, in large numbers, in about 10 years."

At the same time the group announced another new world in the 55 Cancri system, bringing the star's total to three. The first, found in 1996, has a much tighter, 14.6-day orbit very close to the star. The second orbits every 44 days and seems to be locked in a 3:1 resonance with the first. These two have at least 0.9 and 0.25 Jupiter masses, respectively.

Then comes a big, seemingly empty gap out to the Jupiter analog. Gregory Laughlin (University of California, Santa Cruz) tried putting an Earth-mass world into the gap at Earth's distance from the Sun — and found that it would be stable in the 55 Cancri system for billions of years. Whether any terrestrial-mass planets actually formed here, of course, is unknown.

Also in the newly announced crop is what seems to be the least-massive exoplanet yet discovered by the radial-velocity method. A body orbiting the Sunlike star HD 49674 in Auriga may be as light as 0.15 Jupiter, or 40 Earths — setting a new record for the radial-velocity method's abilities. However, that value assumes we see the orbit nearly edge on. If the system is oriented nearly pole on to us, the orbiting body could have several times greater heft. It circles the star at a twentieth of Earth's distance from the Sun.

In addition to the 90 exoplanets discovered so far by this method, astronomers recently found a couple dozen cases where much more distant stars show evidence of objects the size of giant planets crossing their faces and blocking some of their light (see Sky & Telescope, June 2002, page 18, or the similar article online).

More about the entire roster of worlds beyond the solar system is at Marcy and Butler's Exoplanet Search site and Jean Schneider's Extrasolar Planets Encyclopedia. Also, the August Sky & Telescope, now in the mail to subscribers, has two articles about the nature of planets both within and beyond our solar system.

Marcy and Fischer are based at the University of California, Berkeley; Butler is at the Carnegie Institution of Washington in Pasadena.