A Galaxy Near Cosmic Dawn

Astronomers have confirmed that light from a distant galaxy is reaching us from about 700 million years after the Big Bang. 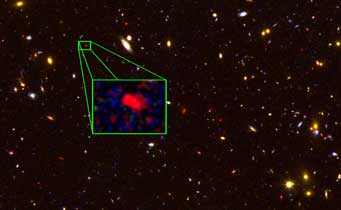 Background: A deep Hubble Space Telescope image of a region in the northern sky, where nearly every object seen is a galaxy. Inset: The galaxy known as z8_GND_5296 was recently confirmed to be the most distant galaxy detected via its spectra, hailing from only 700 million years after the Big Bang.

A ubiquitous fog hides the universe’s first stellar metropolises, but with effort astronomers can sometimes catch a glimpse of their city lights. Using the new MOSFIRE spectrograph on the Keck I telescope in Hawaii, a team managed to detect emission from a lone galaxy bearing the charming name z8_GND_5296. The emission punches through the fog from only 700 million years after the Big Bang and suggests that this galaxy was churning out stars at a rate a few hundred times that of the Milky Way — raising questions about how vociferous star birth was in the early universe.

The galaxy is the most distant with a measured spectrum, joining the ranks of only five others known to exist in the universe’s first 760 million years, or at what astronomers call a redshift of 7. (A sixth one is just shy of this benchmark at a redshift of 6.9). Several dozen more galaxies potentially fall into this elite group, but astronomers don’t yet have precise distances from their spectra. Instead, observers have estimated those distances by comparing a galaxy’s brightness in different filters (as they did for the recent “census” with the Hubble Space Telescope).

A distant galaxy looks red for two reasons. One, the universe’s expansion stretches light waves, so that light from a more distant galaxy appears redder than that from a nearer one. Two, part of the galaxy’s emission is blocked by a fog lying between it and us. Astronomers often use a specific emission line from hydrogen called Lyman alpha to find distant galaxies. Lyman alpha is absorbed by neutral hydrogen, and hydrogen pervades the cosmos. The farther away a galaxy is, the more neutral hydrogen lies between it and us, and the more its Lyman alpha emission will be absorbed. Intervening hydrogen is particularly a problem in the cosmos’s first billion years, because radiation (mostly from star-forming galaxies) was still working on ionizing the abundant hydrogen, and much of the universe was still neutral. Only emission that’s strong enough or redshifted enough (or both) will make it through.

Given these two processes, looking at how a galaxy’s brightness changes in images taken at different wavelengths gives a general estimate for its distance. In contrast, spectroscopy allows astronomers to measure exactly how far a galaxy’s light has been shifted by cosmic expansion, giving a more precise distance.

z8_GND_5296 is actually only one of 43 high-redshift candidate galaxies that Steven Finkelstein (University of Texas at Austin) and colleagues observed in the hope of detecting Lyman alpha. They knew the odds were low for detecting many galaxies, due to the hydrogen fog. The fact that z8_GND_5296’s Lyman alpha emission managed to shine through the fog at this epoch means it’s putting out an incredibly strong signal. The galaxy is fairly puny, too: it’s about one billion solar masses, slightly less massive than the Small Magellanic Cloud. Yet given its brightness in different HST filters, the team calculates that the galaxy is pumping out stars at a rate between 320 and 1,040 Suns per year.

That’s huge: the Milky Way only creates roughly one Sun each year. Per unit mass, it’s even greater than “starburst” galaxies during the peak of cosmic star formation, which is thought to have happened when the universe was 2 to 3 billion years old.

A second galaxy in the elite group, named GN 108036, also has a star-formation rate of about 100 Suns per year. Because it’s weird to find two galaxies with such starburst action in a fairly small sample — astronomers would expect a star-formation rate one-thirtieth as high as z8_GND_5296’s during this cosmic epoch — these detections indicate that star formation during this time might be much higher than previously thought.

Another oddity: the team estimated that they’d detect a half dozen of the 43 galaxies they set out to confirm, not just one. The lower return could mean that neutral hydrogen is even more abundant than expected, perhaps as reservoirs within the galaxies themselves, the astronomers suggest in the October 24th Nature.

The results are exciting, yet it’s hard to draw conclusions because there are still so little data on early galaxies, says Peter Eisenhardt (JPL). Astronomers know the universe was pretty uniform at the very beginning, and then 1 billion years later it was ionized and populated with blazing galaxies. But the in-between happenings are largely mysterious. “This is the frontier of knowledge, white space on our maps of the universe,” he explains. “Are there continents out there, or only islands, or just open sea? Anything we see is a discovery, and theory is not much guide.”

ALMA and upcoming instruments, such as the James Webb Space Telescope, should have the ability to look at even redder wavelengths, prying into this early era. The fog that blocks Lyman alpha emission doesn’t strongly deter emission from triply ionized oxygen ([OIII]) and other atoms, so emission should still reach us from ionized gas at these longer wavelengths, allowing astronomers to peer at star-forming regions even earlier in cosmic history.

I'm not feeling too surprised that this very early galaxy is a fountain of starbirth. Seems to me that this would have to be true to form a galaxy capable of being seen at that distance. If the reported rate of star formation had taken place since day 1, the galaxy would be a bit larger than the Milky Way. If one star a year had been born, it would be a thousandth of that size. I'm not saying there is no mystery here, as we don't understand what causes the massive fecundity of z8_GND_5296. The amazing thing is that there are ANY sizeable galaxies only 700 million years after the big bang.

Thanks for this interesting report. I'm a humble amateur, just somebody who likes to point my little telescope at the Moon, Jupiter, or the Orion nebula. But the quote from Peter Eisenhardt captures my excitement with the study of early galaxy formation. These are real empirical observations right on the edge of our understanding of the universe, not just computer models or wildly unbounded multi-dimensional speculations. The prospect of better observations from new instruments like JWST and ALMA only adds to the excitement. Another area of cosmology that has the same esthetically satisfying empirical foundation are studies of the microwave background radiation. Attempts to look further back in time can only be done on whiteboards or supercomputers, not with actual telescopes.

Tony, light from this galaxy took just over 13 billion years to reach us because the universe has been expanding in all directions, so we and z8_GND_5296 have been moving away from one another the whole time. Since the speed of light is fixed, the light from z8_GND_5296 has been trying to catch up with us as we move away from one another. Imagine that you're driving from your house to your friend's house five kilometers away, and your car is travelling at 100 km an hour. You'll get there in three minutes (unless there's traffic!). Now imagine that when you leave your home, your friend starts driving away from his home straight away from you at 50 kilometers an hour, and you need to catch up with him. I don't remember enough high school algebra to solve this problem, but it will take a lot longer than three minutes to catch up to your friend. I hope this analogy helps. Cosmic expansion is hard to get one's head around! Here's a useful illustration: http://background.uchicago.edu/~whu/beginners/expansion.html

I think I figured out how to solve my word problem above -- it will take you 75 minutes to catch up to your friend. Then you'll have to ask him why he was fleeing from you!

Can they use triply ionized oxygen lines when studying such a distant and young galaxy? We know there was plenty of hydrogen during that era, it was primordial, but had there been emough time for very much oxygen to have been formed?