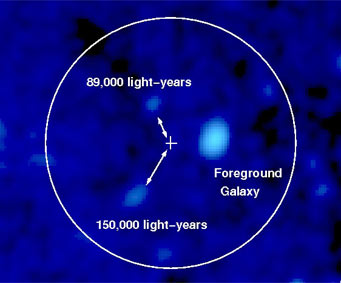 Nothing whatever appears at the site (white cross) of one of the most powerful gamma-ray bursts of 2007. This image was taken with the 10-meter Keck I telescope last February 16th. The two nearest galaxies, and their distances from the burst site as projected on the sky, are marked with arrows.

Whenever astronomers think they've got gamma-ray bursts all figured out, along comes another one that upsets the applecart.

Gamma-ray bursts of the "long duration" variety (those that last from a couple seconds to several minutes) pretty definitely come from the core-collapse and death of very young, very high-mass stars. But then how to explain the one that NASA's Swift satellite spotted 11 months ago in Gemini? Named GRB 070125 (because it happened on 2007 January 25), it was one of the most powerful gamma-ray bursts of the last year. As its visible-light afterglow faded down, no host galaxy for it came into view even in searches with the 8-meter Gemini North telescope and the 10-meter Keck I.

Moreover, its spectrum showed no sign of interstellar gas between it and us, as would probably be evident if the burst had happened inside a galaxy.

How could a massive, very young star exist way out in intergalactic space, where there are no star-forming regions? Its distance was measured as 9.4 billion light-years by its redshift. Could this be a whole new class of something that causes powerful gamma-ray bursts?

Actually, there's no need to reach that far quite yet. One possibility is that the burst happened in a very dim "tidal tail" of young stars and star-forming regions torn from one of the two galaxies that appear to lie at least 90,000 and 150,000 light-years from the burst site. It would take long-exposure Hubble pictures to spot such a tail. They're now being planned.

If they show nothing, high-energy astrophysics will face a really big problem.

For more on this, see the NASA/Goddard press release issued today.

This may be proof of the colliding membranes of M Theory.

If no host galaxy can be found, perhaps this was one member of a massive binary that got too close to a supermassive black hole and while it's partner became lunch for the black hole, this star may have been ejected from it's host galaxy.

... or the is a host galaxy far deeper in Universe for ours scopes to gather enough photons of it's light for even smallest image. This scenario is equal to other as far as we speculate about such scale distances and our capabilities of peering into the Space. There are voids in Universe, but how often next generations populated them with quasars and faint or distant galaxies? The state-of-the art of deep Space observations we are able to reach today I'm sure will be a solid but only average tomorrow. Especially when We'll mahe a big step for Astronomy by orbiting scopes and populating with these facilities the other side of Moon.