For the first time, astronomers know the true color of an exoplanet — and it appears an un-Earthly shade of blue. But don't pack your bags… 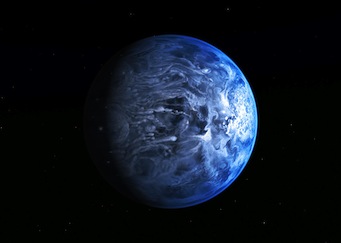 An artist's illustration of HD 189733b, a blue gas giant. Don't let the cool colors fool you â€”Â it sits so close to its star its temperature is a scorching 1200Âº C.

Call it a Deep Blue Dot. In a first-of-its-kind confirmation, an international team of astronomers has used the Hubble Space Telescope to measure the visible light reflected from an exoplanet, and it’s a deep cobalt blue.

Ten times closer to its star than Mercury, the hot Jupiter known as HD 189733b is not exactly a pleasant place to visit. The weather forecast calls for 1200º C heat (2200º F), raining glass, and up to 15,000 kilometer-per-hour winds (9,300 mph). But look at that color! “[W]e can actually imagine what this planet would look like if we were able to look at it directly,” said the team’s leader, Frédéric Pont (University of Exeter, UK).

Actually, the planet didn’t so much show its true colors as reveal them in its temporary absence. It’s a transiting exoplanet, meaning that its orbit takes it across and behind its star as seen from Earth. Using Hubble’s STIS spectrograph, the team measured the brightness of the star-planet system in blue and greenish light before, during, and after the planet slipped behind the star. Seen together, a tiny fraction of the light was reflected off of the planet (about 1/10,000th of the total brightness). But when the planet hid from view, the blue light dimmed and the green did not — ergo, the planet itself must be bright in blue.

What about red light? Although the team didn’t observe in those wavelengths, they note in the paper that if HD 189733b were shiny in red, the planet’s overall brightness would be higher than most of the hot Jupiters that the Kepler mission has been able to measure. (Preliminary measurements of polarized light from the planet had also indicated a surplus of blue light and a deficit of red.) 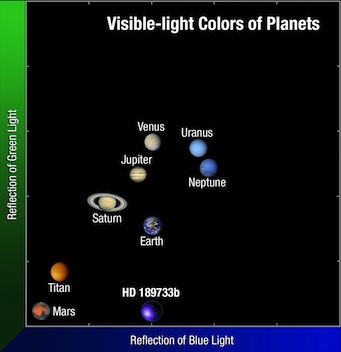 HD 189733b is quite unlike the color of the other planets in our solar system, as shown in this plot. The brightness of the planets in the blue and green bands that the team used are shown along the horizontal and vertical axes. Although previous studies had compared HD 189733b's hue to the blue-green tint of Neptune, the study by Pont's team indicates the planet is reflecting close to no green light.

The team suspects silicate particles cause the color. These fine, glassy beads flying through its churning atmosphere tend to scatter blue light at us, which speaks to the growing diversity of known exoplanet atmospheres. It’s a far cry from Jupiter, whose red-and-white stripes are earned by clouds of ammonia. Uranus and Neptune have a bluish tint, but that’s because the methane in their atmospheres absorbs red light.

We can add HD 189733b’s blue hue to our increasingly bizarre picture of this alien world. It’s already one of the best-studied exoplanets for several reasons. First, it’s big, blocking a whopping 3% of its host star’s light as it transits. (The size also helped the team out because it reflected a lot of light, making its absence noticeable.) Its host star is also close and bright, only 63 light years away in the constellation Vulpecula. Astronomers have even mapped its atmosphere in the infrared and seen red “sunsets” — that is, starlight passing through its atmosphere when it transits appears redder from cloud absorption.

Such observational techniques are the key to searching for life on alien worlds, and scientists are chomping at the bit to use them on Earth-sized, potentially habitable planets. NASA’s upcoming TESS mission and other efforts aim to discover those systems around bright, nearby stars, with follow-up characterization from the James Webb Space Telescope, to be launched in 2018.

Instead of raining cats and dogs there, it rains glass figurines...

I understand that this exoplanet has a 52 hour and 48 minute YEAR!
Is it really possible to have a gas giant in such a tight orbit?
Certainly, the tidal forces would strip everything including rocks from the surface.

Richard, it is not only possible for exoplanets to have orbital periods that short, it is evidently quite common. In fact about 50 exoplanets have been discovered with orbits of less than 50 hrs. The shortest “year” so far discovered is that of PSR J1719-1438 b. It whips around a pulsar in only 2.17 hours!

Bruce: But how can a planet withstand the disruptive tidal forces generated by such a violent orbit? Sorry,I am not an astrophysicist!

Few of us are Richard, but astrophysics makes for an endlessly fascinating hobby. And you’re right, no ordinary planet could withstand the tidal forces in such a tight orbit. But PSR J1719-1438 b is far from ordinary. It is also known as the “diamond planet” as it is thought to be mainly composed of crystalline carbon. So this extraordinary planet is rigid enough to avoid tidal disruption.